VEDANTHANGAL is not on the coast and therefore it should not have been a part of this tour. But it is not very from the coast either. It is only 53 Kms. from Mahabalipuram. We decided to succumb to the temptation and visit it for its uniqueness and the bird life that one is expected to see here.

In the year 1858 the then British collector of Chengalpattu passed an executive order establishing Vedanthangal as a ‘sanctuary’ apparently without any supporting legislation. In 1936 it was officially declared a ‘wildlife sanctuary’ and in 1962 it became a Reserve Forest under the Madras Forest Act. In 1988 the Vedanthagal Lake Bird Sanctuary came into existence under the Wildlife Protection Act, 1972. All through these legal tangles the farmers of this area zealously guarded the lake and it’s birds especially the visiting migratory species. It is on record that they even petitioned the government against the British officers hunting in the area.

The farmers have a good reason to guard the place and the birds. On the opposite side of the lake is a large area growing paddy using the lake water. Because of the birds, free fertilizers are added to the lake water. A Bund separates the lake from the paddy fields and the water flow is controlled by 4 small gates. The Bund is now converted into a beautiful pathway and two watch towers have been constructed. The small sanctuary with a very high density of birds is regulated by the Forest Department of the state.

Many farmers are benefitted by the bird droppings which work as a natural fertilizer. Here at Vedanthangal this same phenomenon has been harnessed to the maximum benefit and very systematically.

The lake and the paddy fields on the opposite side. 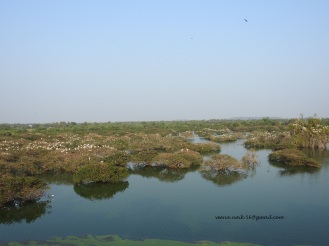 The water level was quite low this year (2016) on account of lesser rainfall and consequently the lake attracted fewer birds. By the time of our visit in early February 2017, most the migratory species had already made their way back to their own countries but a number of them could still be seen.

Rare view of a Painted Snipe.

A Moorhen with her chicks:

We came to Vedanthangal later in the afternoon Chengalput and decided to come back next morning again so we retire to Chengalput and make a second visit the next day ear;ly morning. This lake affords great opportunities for bird photography even for the amauteurs. 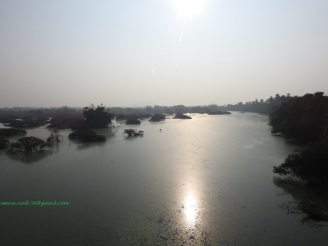 Vedanthangal is a place to remember.

Everyone knows MADRAS. Now it is called Chennai and after some time people will forget Madras as they have forgotten the name SADARS which is 68Kms. south of Madras or Chennai. Sadurangapattinam was the original name before the White Man arrived.

During the Europeans’ race for the colonies on the Coromandel coast Dutch established a post here in the 17th century. The fort or at least the part which exists is in a fairly good condition and free of encroachments. The location is between the Madras Atomic Power Plant and its residential colony. The existence of the power plant and a Research establishment ensures excellent road connectivity to the fort, right up to the doorsteps.

Sadras was basically a trading post and not a military garrison. It has a lot of space for storing merchandise. The major items traded in the area at that time were grains, ghee, muslin cloth and salt. The view of the sea from the Fort: 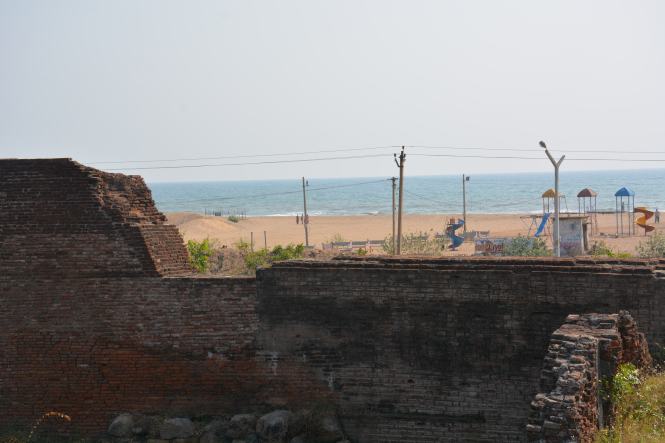 In 1818 the British raided the fort and probably the first war between the two  powers was fought here in 1818 and is called the Battle of Sadras in the history books. The Dutch lost. 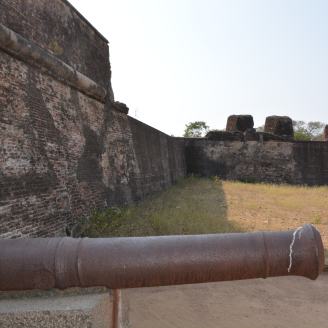 The Dutch seem to had been preparing well for their dead. Wherever there were Dutch establishments the graves have survived very well. We have seen them at Surat, Cochin, Pulicat and here. Immaculate graves with proper inscriptions and what is to be noted- extremely good construction which has survived 300 years or more.

When you enter the fort, turn to your right to get a view of the cemetery and the graves. 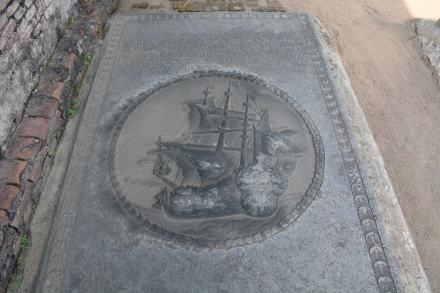 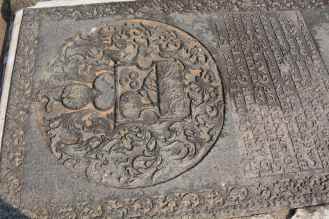 The ghosts here are friendly:

MAHABALIPURAM or MAMALLAPURAM is an UNESCO World Heritage site is our next stop. Much has been written about its fabulous sculptures and temples. It is too technical for me to comment on.

Historically this place was also a port trading with Sri Lanka and South-East Asia. It flourished from the 1st century AD under various South Indian dynasties including the Pallavas ruling from Kanchipuram. 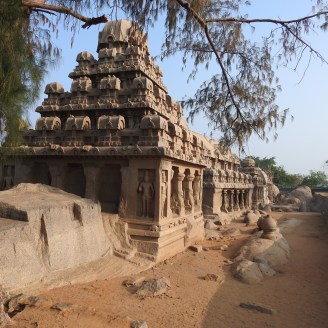 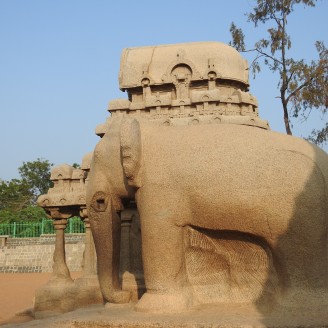 Some unfinished work of the sculptors: 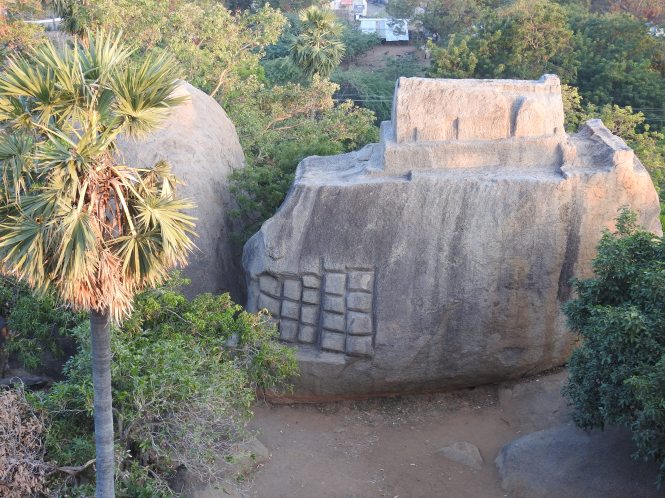 Krishna’s Butter Bowl. is this what they call this stone?

Among the living things is a tree which has taken this curious shape among the granite boulders as if imitating them: 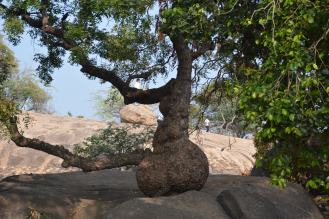 Mahabalipuram has a lighthouse ensconced in the granitic rocks. It provides an excellent view of the surroundings even from its base.

The recently started Museum of seashells is a must-see. It is a private museum housing a huge collection of a seashell put together by a single individual. It must rank as the biggest such museum in the country. The only competitor is on the island of Diu in Gujarat and is much smaller.

A fish merchant with a passion for the seashell – Mr Raja Mohammed has spent time and money to collect a vast 2000 species and 40,000 specimen of seashells. An entrance fee is charged but you will feel it justified. 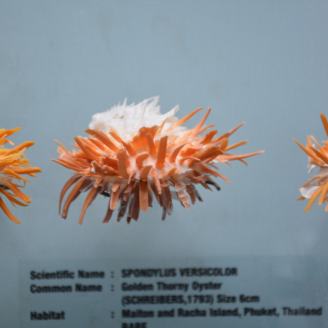 The displays have been arranged in a professional way but need some rearrangement to bring the exhibits in line with the biological classification of the shells. 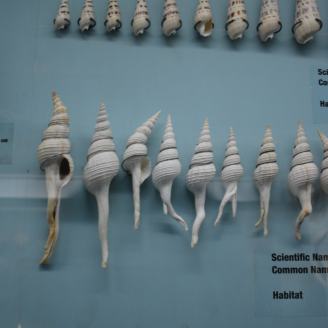 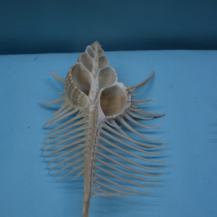 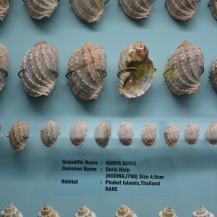 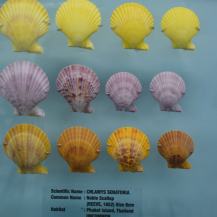 CHENNAI  is not on our itinerary. We have been there before. We would have skipped it altogether but we had to be there to attend two weddings. Lighthouses is something we do not skip on this coastal trip. We landed at the Chennai Lighthouse which is attractive as it has an elevator. It happens to be a Monday their weekly off. The only other two places we dropped by is the Fort St George and the Church of St Thomas. The latter because we had met him on our way on the western coast in Kerala.

Fort St George. I must record here that our visit to this place was during the third short-lived Chief – ministership of O Paneerselvam. The security was tight indicating his presence on the premises. A week later he was out. 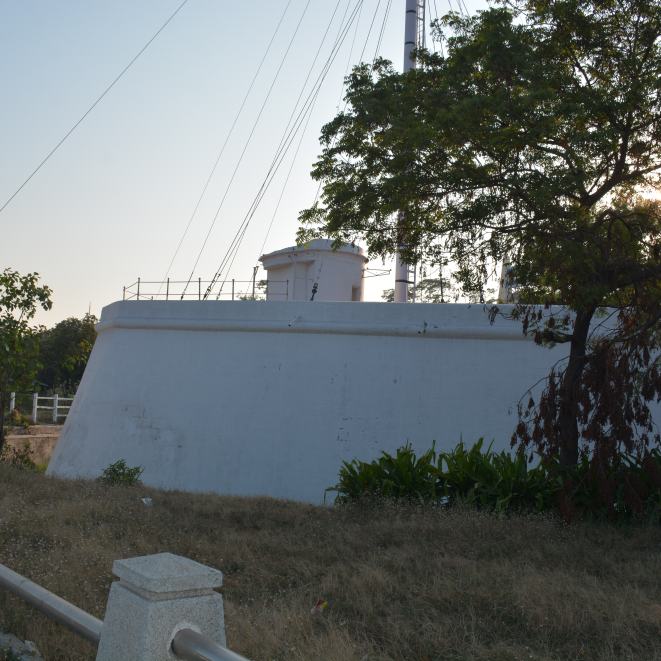 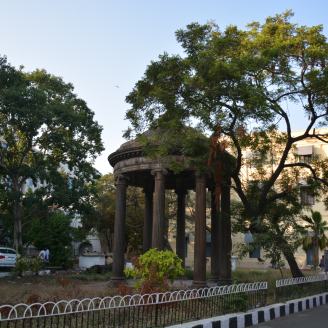 The Church of St Thomas: 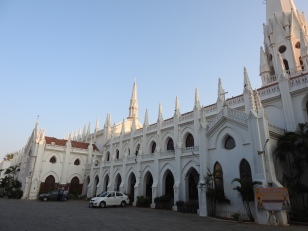 The next day morning we start early and this is our last day in the state of Tamilnadu. The destination is Pulicat.

The 60 Kms drive from Chennai through Thiruvallur district to Pulicat takes you through interesting countryside. The first half is through the areas abutting the new ports that have sprung up north of Chennai and the other half is the typical seaside villages. The roads, by and large, are good though narrow.

Pulicat Lighthouse is an elegant structure and at 50 meters high one of the tallest in India. 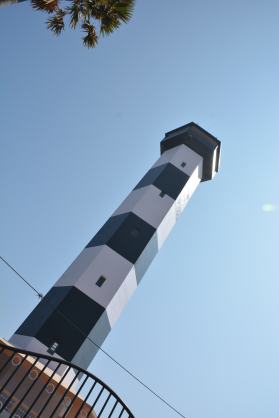 Tamilnadu shares the Lake Pulicat with Andhra Pradesh and has only the southern end of it to its share. Fishing activity on the Tamilnadu side is quite high. Probably the fishing takes place mostly in the Andhra waters.

Pulicat is supposed to have a fort, a Dutch Fort. It is nowhere to be seen. We make inquiries and sent from one corner to another. I understand that the fort was more of a warehouse and a flat building which is now used as a government school and health centre.

True to their reputation the Dutch cemetary survives unscathed.

The gate is closed and we had to take the pictures from the gate. On notable feature of these graves is that there is no Cross to be seen. Instead you can the skulls and bones as seen on the sign boards indicating danger. 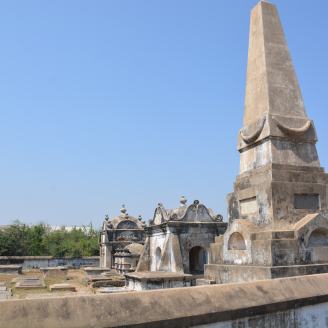 In between the above four place that we visited we attended two weddings in Chennai city. Here are some pictures from the weddings: 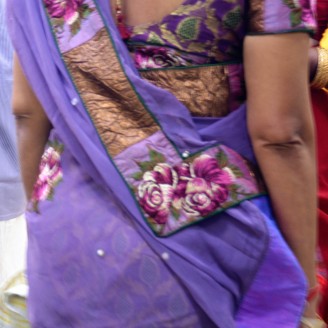 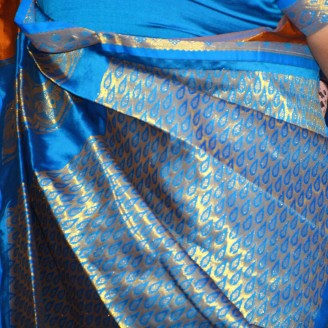 Late in the day we leave Pulicat and make our way towards Andhra Pradesh. Our travels along the Tamilnadu coast lasted 22 days.