In the last post (No. 94) I made an error by omitting a place we visited lying between Karaikal and Cuddalore. Poompuhar cannot be ignored.

The southern Coromandel Coast mostly within the territory of Tamilnadu state is thick with history.This history is not only of the European colonization but goes back to the ancient times when many places along the coast were centres of international trade. One such place which is said to have flourished from 200 BC onward is Poompuhar. The seaside town which was once the second capital of the Chola dynasty and a major centre of international trade with both eastern and western people. Silk appears to be a major item of exports from here. The ancient port as destroyed and is now found by the archaeologists submerged off the coast for up to 5 Kms. Erosion of land or a Tsunami have been cited as possible causes.

There are no archaeological remains on the shore. A small maritime museum displays a few objects, not very impressive. 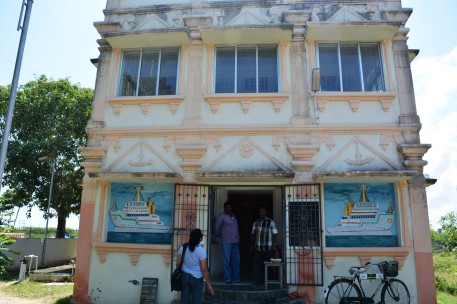 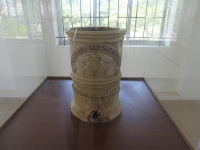 The beach is a major attraction and the tourism department of the state seems to have made efforts to promote the destination. 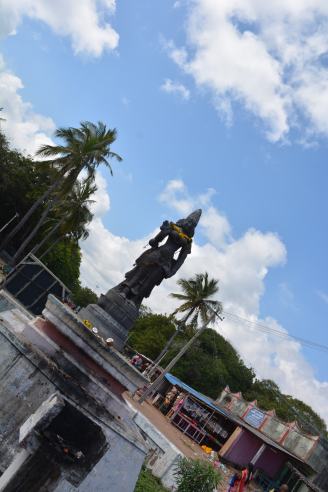 Poompuhar has a lighthouse which resembles the one at Mallipatnam in design and the colours. 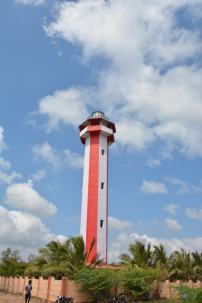 There are a couple of temples, quite nice. We did not go into the details. One is of Godess Kamakshi. 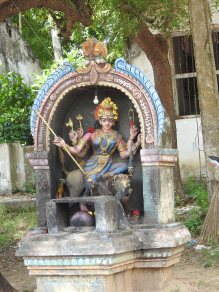 One impressive feature of the Poompuhar beach is the fish trading activity. This is of two types. Fresh fish is sold fried in the several small kiosks. Apart from fish Crabs and Prawns are also sold. The tourists seem to be providing the client base.

The second one is sale of dried fish. This appears to be economically more important. This market has a vast variety of dried fish in sizable quantities. I cannot imagine a tourist carrying dry fish in his bags on his way back home. It is seriously smelly. The market must be for tradesmen dealing in fish for other parts of the State or the local consumers. 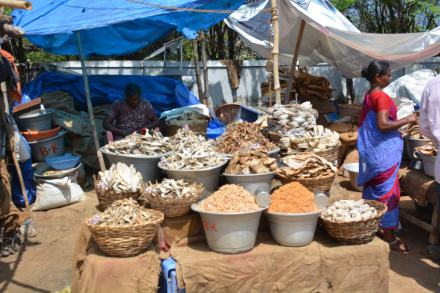 Our next stop after Cuddalore is Pondicherry or Puducherry as it is now renamed. The former French colony was established in the year 1674 and this status lasted till 1954. This is about 280 years and much less than the 450 years’ rule of the Portuguese in Goa. The Portuguese were the First-In-Last-Out of the European colonialists in India. They appeared on the Kerala Coast at the beginning of 16th century and left Goa in 1961, which gives them a time-frame of four and half centuries, without making any significant impression on this sub-continent. Of course this is not the subject matter of this blog. Let us move on.   One feature of this French territory and also the other three in the country is that they are highly fragmented parcels of land. (There are other two- Chandranagore in present day in W bengal and Musulipatnam in Andhra Pradesh- French territories that did not last till 1954).

One has to pass through other territories (which were earlier British possessions) to reach another part of the same geographical entity. This situation still continues and is more relevant from the point of view of the liquor trade. When you enter Puducherry from the south, you drive a bit and re-enter Tamilnadu, drive a bit more and get back into Puducherry and so on until you drive past the last little parcel of land and drive into Tamilnadu. It is not at all easy to understand which part of political India you are in. The only determining indicators are the liquor shops on Puducherry territory. In Tamilnadu territory you will not find them. They cannot compete with the prices in the Puducherry territory.

Here is the Google map: 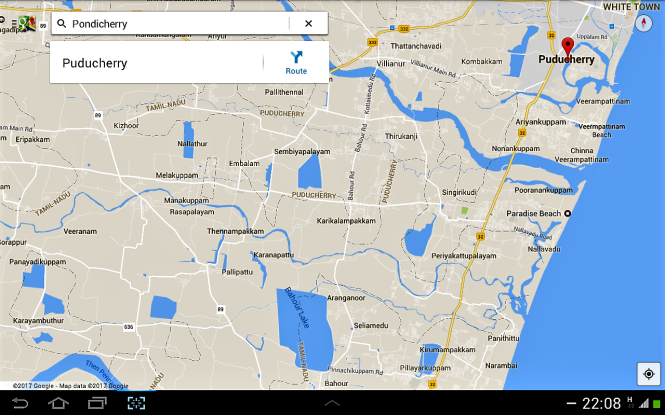 The only other way to assure yourself that you are in Puducherry is to find a policeman with a red flat cap. They are found only in Puducherry and nowhere else in this country. 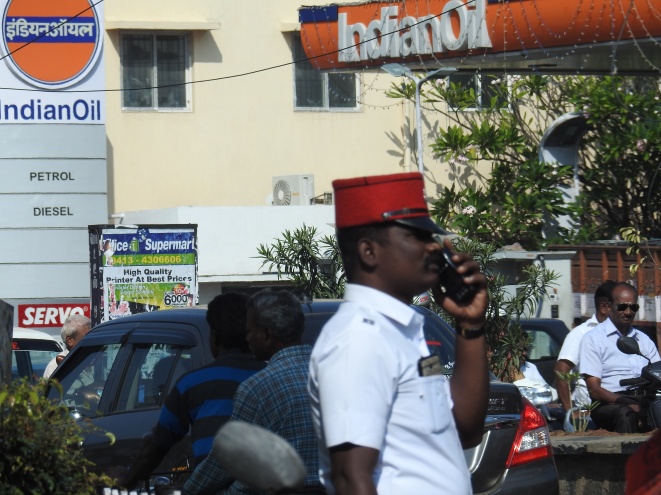 Puducherry town smells of Europe. The neatly arranged streets with European names and the design of the buildings distinguishes it from the rest of Tamilnadu. 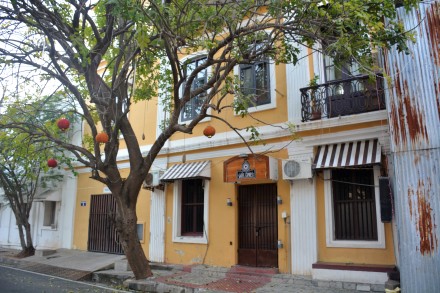 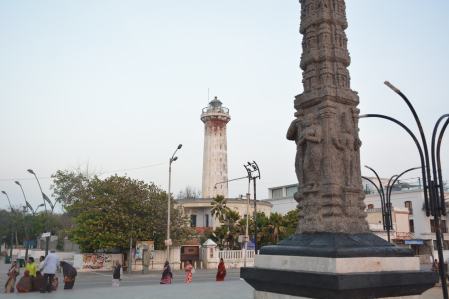 The old lighthouse near the beach, the Café and the statues makes it look older.

We had a long walk on the beach, north to south in the evening avoiding the main tourist circuit. But then Puducherry  is all about tourism. Wherever we went along the seashore it was Tourists , the European tourists. They sustain the place’s existence as an independent entity. The same cannot be said of the other three parts of the Union Territory.

Early morning the next day we drive northwards with an intention to make the night halt at Mahabalipuram. The territory between Puducherry and Mahabalipuram is very interesting. It has water on both sides. There is a huge lagoon separated by a narrow stretch of land through which the East Coast Road passes. It is early February and there are still some migratory birds seen here in the lagoon.  Before the halt at Mahabalipuram we visit another seaside place.

Kadapakkam is not a famous place but is worth visiting. It has the potential to develop as a tourist destination. It has a pretty beach, a beachside early 18th century fort, a lighthouse and temples, of course.

We leave the East Coast Road and and drive eastwards to come to the Lighthouse. The lighthouse is located quite far from the seashore.

Very close to the lighthouse is a temple of Lord Vishnu. 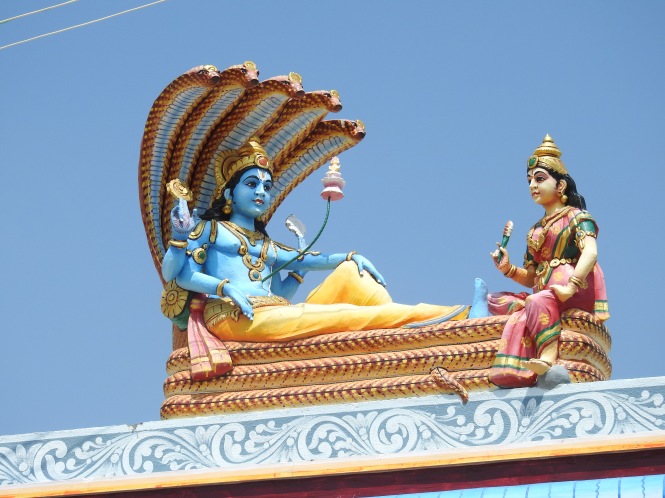 It has these figurines which are found at many other Tamil temples. Are they the guardians of the temples? 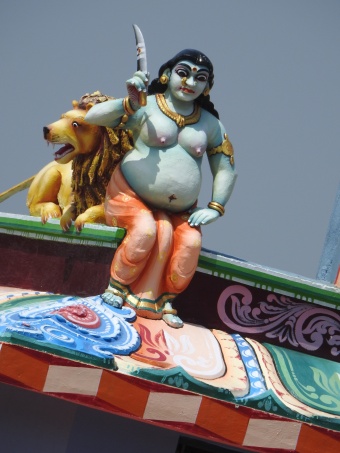 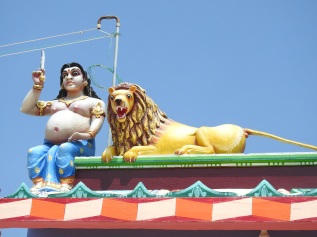 The beach is along the shallow waters of the lagoon. The place also has an active fishing community. 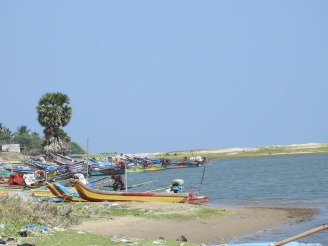 The area we are visiting used to be a seaport in historical times, probably even before the Fort was built. It used to be known by the names of Idaikazhinadu (the name of the region), Alamparva and Alampuravi. Recorded history starts from the rule of the Nawabs of Arcot under the Mughals. The Muslim kings built this 15 acre fort between 1736 and 1740. During the early colonial period the fort came under the control of French as well the English. The trade in Ghee, Salt and cloth because of which the place prospered seems to have declined in the later years and that led to its eventual abandonment. It is said that the fort was in a much better condition before the 2004 Tsunami.

And  the fort. It is being looked after (or not looked-after) by the Tamilnadu Government Department of Archaeology.  I think although the fort is not great in terms of antiquity, it deserves to be looked after. 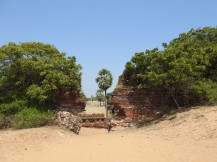 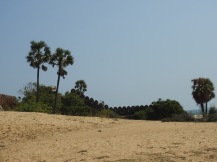 Having said that I am aware of the difficulties involved. The sheer size of the place, the salty and sandy terrain, the winds and the heat makes it a difficult task. The masonry work which has crumbled will be a challenge to restore.

It is to the credit of the villagers that the fort is free of trespassers. We did not see any squatters except a few goats and no encroachments.

There is an excellent motorable road up to the fort and that is another reason the tourism angle should not be ignored. Going  by the lack of plastic waste, not many people seems to be visiting the place.

If you are at Alamparai at mid-day, it is extremely hot outside and the only shade is provided by the Palm tree. What will you do?

Call the barber and have a shave!!