The last place we visit in Kerala is not Kovalam. It is Poovar which is coming up as a competitor to Kovalam with a lot of water sports facilities and boating on the backwaters. Watch that place.

We have planned our first overnight stop in Tamilnadu at Nagercoil or Nagarkovil the district headquarters of the first district abutting Kerala from the southern end. Tamilnadu has as many as 12 districts facing the seas, excluding the city of Chennai. Tamilnadu also has the longest coastline among Indian states after Gujarat.

The distance from Kovalam to Nagercoil is only 66 Kms. by the nearest route but in keeping with TheBlueDrive charter we take the coastal road and spend the entire day to reach Nagercoil of Nagarkovil.

The day is well spent. Poovar came in as a by-product.The Churches and the related statuary here and in other parts of the region are very impressive as we will see as we move along the coast. This is the sample at Poovar.

The next place we enter is a massive seaside confusion for a visitor. The Google map that my wife and Navigator to the expedition is using shows us to be in Kerala whereas the signboards are declaring the places as Tamil territory. The boundary runs in one direction and the road in another, causing the confusion. The locals, however are not bothered. They can always buy their whiskey from Tamilnadu and drink it in Kerala where it is not legal. Language? I suppose they speak both. Religion? Don’t ask me. It is a big jumble of temples, mosques and Churches. In the event the Churches come out the winners,at least visually.

Kollemcode is the name of the place. It is spelt differently at a local Christian establishment. The churches above are within a range of about 15-20 Kms, not exactly in this village. 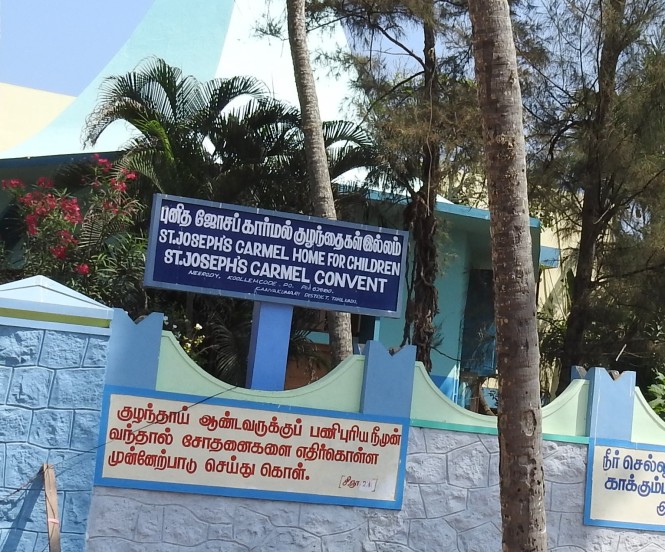 The proposed Kasargod-Kolachel National Waterway passes through here. It would be nice to see people and goods moving cheaply through these channels as in the good old times. Before we reach here there is a massive cemetary on the roadside.

Cementary at the Kerala-Tamilnadu border, near the sea.

We don’t stop to make enquiries and drive on with the help of the Google map. This map seems to ignore the fact that roads can be washed away completely in these coastal areas by cyclones and Tsunamis. We face this scene and have to return back to take another road, losing an hour or so in the process.

Back on the road, it is all pleasure once again to drive through the countryside. In one roadside village we see a crowd and stop to see what is happening.

Fishing in the village pond.

It happens to be the day for picking the  fish from the village pond. Pretty site.

We also come across a village engaged in the extraction of coir from the coconut husk using the traditional methods which involves soaking  the husk in water. 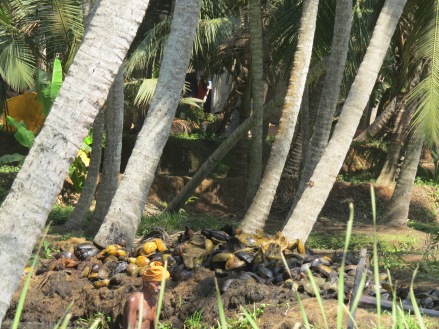 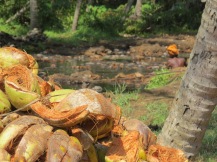 We are not yet in Nagercoil as planned and we are hungry. We have lunch served on coconut leaves at a roadside restaurant. It is delicious. At the end we are asked to fold the coconut leaves and put them in a container before washing our hands. You should have manners.

We move on towards Nagercoil and come across a water body which has a large number of birds even at this late afternoon time. We stop to have a look and decide to return the next day morning.It is winter time and such congregations are expected.

Nagercoil or Nagarkovil is a big Railway junction and southernmost large commercial town of Tamilnadu if we consider Tuticorin as an Eastern town.

By way of places to be visited in the town, we did not find many. W were directed to this temple of the Nagadevata, the Serpent God. 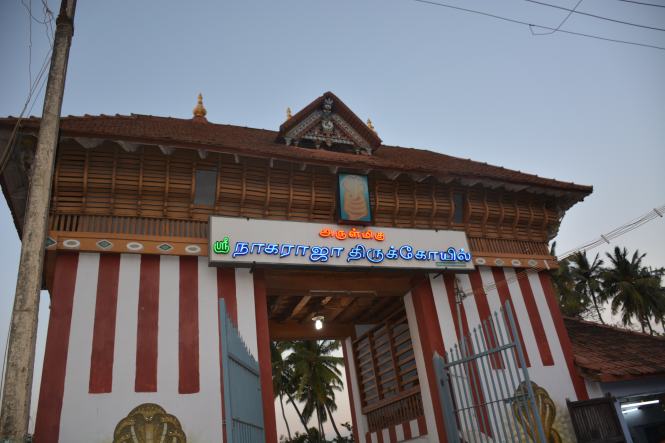 The deities worshipped here are Lord Krishna and Vasuki the serpent king.

This local young man has bought a new scooter just now, The first stopover is at the temple. A lemon is crushed under the front wheel to ward of bad things happening. Insurance is not required.

The worship of Nagas, the serpents is a part of the pre-Aryan traditions in the peninsular India.It is a part of ‘Nature Worship’ culture. Snakes are important to the agricultural communities. They control the vermin rat populations that can wipe out crops if not controlled. The Gods from the north are imposters in these temples.

The next day we move out of the town and visit two places. The first one is a Palace and the second one is a fort.

The Western Ghats come to an end around this part of Tamilnadu. The foothills seem around here are called Veli Hills.

Nestled in the Veli Hills is a palace complex called Padmanabhapuram Palace. The palace was built by Venad’s king Iravi Varma Kulasekhara Perumal. His kingdom became more famous later as Travancore. The palace, at least the first part was built at the beginning of the 17th century and rebuilt later in the 18th. Although the location of the palace is in Tamilnadu, the Kerala government maintains this complex for historical reasons.

The palace is worth visiting. The exteriors are typical Kerala architecture with the tiled roofs. 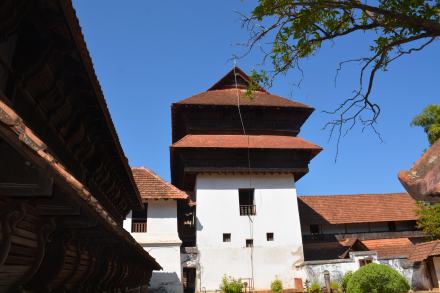 Some European influence is also seen. The kings here did have European connections including a Dutchman leading the Army. We will come to that a little later. Here is the colonnade.

The interiors are done in teak wood. The artistry is simple but adorable.

Use of  Oyster Shells in the window panes is seen here. Probably an European influence.

The palace complex is in a granite fort. Not much is left of the fort, but the palace is well-maintained.

There are some artefacts displayed in the palace itself and many more in the Museum at the back. The museum does not have much to write home about. The Malayalis are fond of Museums. We have mentioned one earlier in this blog which ends as you enter and count five. 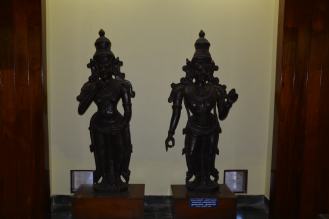 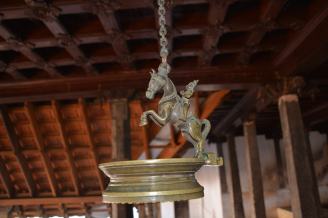 One notable part of the palace complex is the Oottupura. This is a single -storeyed structure where the king dispensed food to 2000 people every day, a 1000 on the ground and another thousand on the first floor.

You can see some equipment is preparing and storage of food on such a large scale.On top right side are the pickle jars.

The king sat in the niche below to watch the processions on the road below. The women had their own enclosure.

Whoever has done what is in picture below deserves to be shot. He has left his phone number behind, or of someone else he wants to be shot. 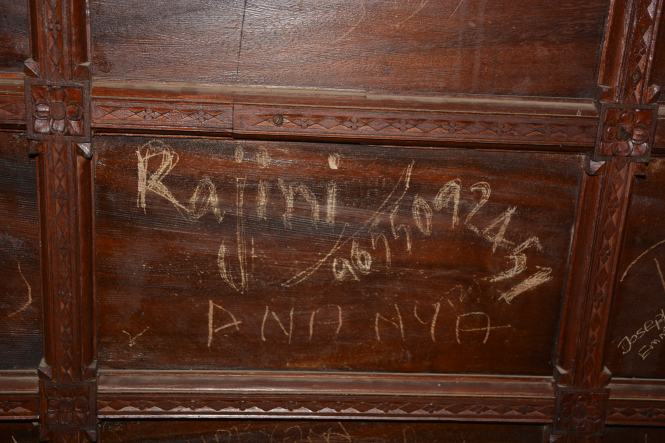 When the Padmanabhapuram where the above palace is located served as the capital for the Travancore kings, the military establishment was located about 16 Kms. away at a place called Thuckalay.  A mud fort was built here in the 17th century and rebuilt in the 18th century in masonry under the supervision of an European who is subject matter of an interesting story. First have a look at the picture of the fort which is not very impressive. 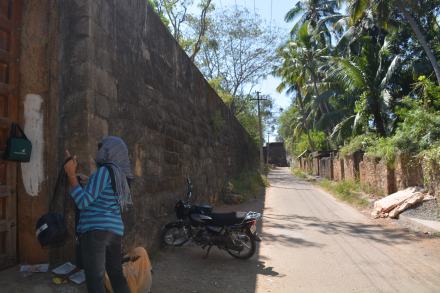 Here is a brief summary of the Fort’s history. 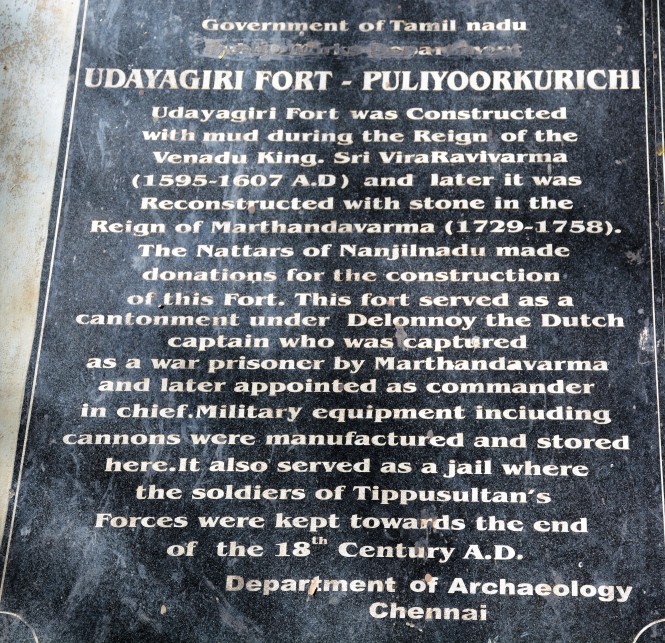 The fort is currently occupied as a Bio-Diversity Park. In a few minutes you can tell that it is a misconceived venture of the Tamilnadu Forest Department. Some mammals and birds are kept here in enclosures and cages, respectively. They are certainly not enjoying the confinement under unhealthy conditions.

The fort is spacious and partly occupied by the Archaeology department. It is said that it contains the remnants of a foundry used for casting guns. I could not see any.

Now the story of the European.Eustachius Benoit De Lanoy was a Belgian man employed by the Dutch East India Company. He was defeated in a battle by the army of Travancore then ruled by Maharaja Marthand Verma. This battle happened at a place called Colachel, now in Tamilnadu State and it happened in the year 1741.  In a very rare occurrence of this type, the captured commander was employed by the Travancore king as his Commander In Chief. He seems to have contributed substantially to the new job with his knowledge of European warfare techniques. He died in the service of Travancore kingdom and his tomb as well as those of his close family are found in the Udaygiri fort, well maintained.

Here are the graves or the tombs. 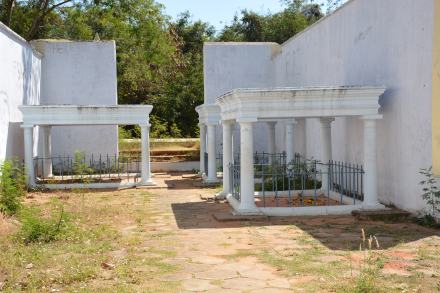 The huge grounds within the fort appear to be used for various purposes.Do you see a man on the tree? Can you guess what he is doing? 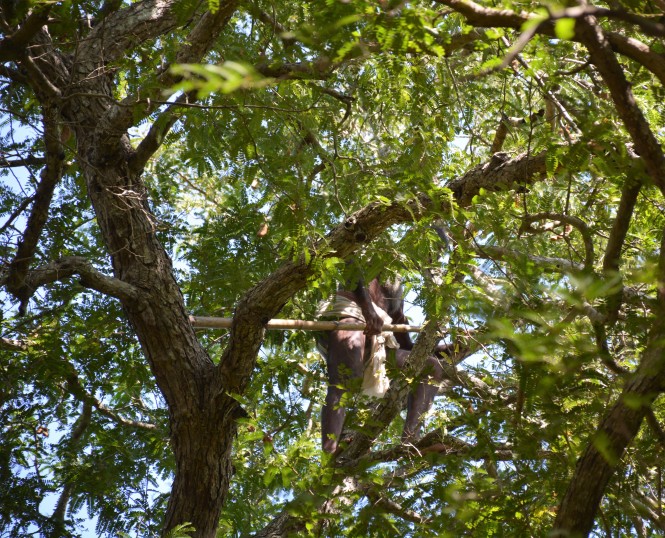 He is cutting down the ripe tamarind, which are collected for sale by his wife standing down below. 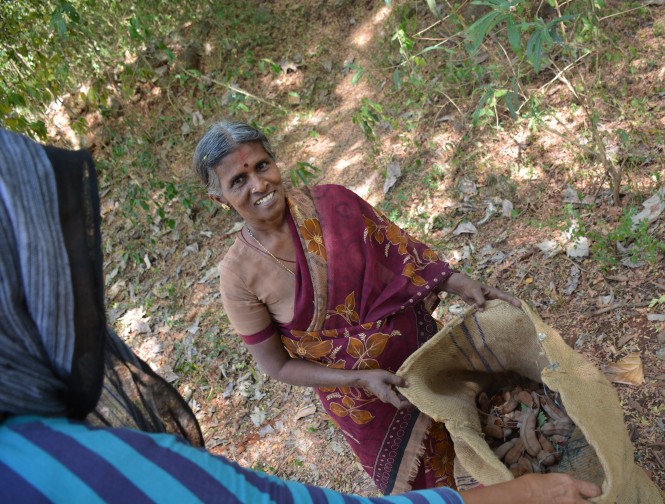