We are nearing the end of our travel in the God’s Own Country. The tail-end is remaining to be covered but nothing comes easy in GOC, even the tail-end and the tail-end stretches a bit into the neighbouring Tamil Nadu as well.

After the stay at the Ashtamudi lake, we head for Thiruvanantpuram or the good old Trivandrum after a brief visit to Kollam. As usual we take the coastal route and make a stopover at Anjengo.

Angenjo or Anchuthengu was connected to Kollam by the British by a canal. Smart guys. Kollam means ‘pepper’ which is what they wanted and that is what the Company was formed for. To distract others, they renamed the place Quilon. That is history for you guys. At some places the canal still exists. I love Kerala for its thick cover of complex and colourful history.

In 1694, the Queen of Attingal who was ruling this region which is 35 Kms north of Trivandrum made the mistake of her life. She granted the British East India Company the rights to establish a Trading Post (whatever that means) and a Fort. This is probably a great achievement for the Brits as it allowed them a foothold in a region which was more of a Dutch and Portuguese ‘Area of Influence’, then.

The fort is intact, 323 years on, in  Excellent condition and used for drying the neighbours’ laundry. 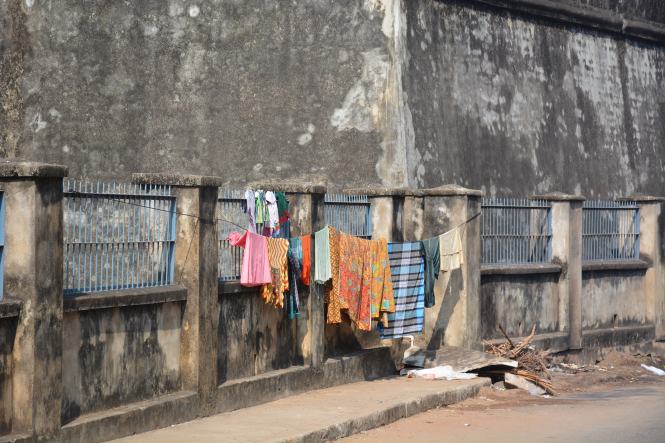 Here are some pictures from inside the fort. 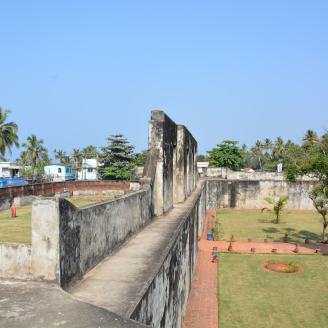 From the outside it is being prepared for encroachment which will happen shortly.

There is a Lighthouse, bang opposite the Fort. In fact if you remove the road, it is inside the fort.

The Trilingual nameplate at the entrance of the Lighthouse proves  the complete and comprehensive failure of the government policy of Tri-lingualism and a triumphant victory of Bureaucratic India. I demand an investigation into the amount of money spent in making this nameplate. I have not seen any of this type anywhere at any of the Lighthouses on the western coast of India. The Devanagari rendering of the name is hilarious. 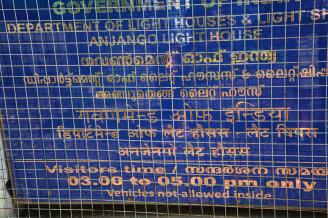 This place is known in Malayalam as Anchuthengu, meaning five (coconut)palms. Very odd. There are coconut palms everywhere and I believe they were there always, before and after the White Man came. What is the significance of ‘five’? 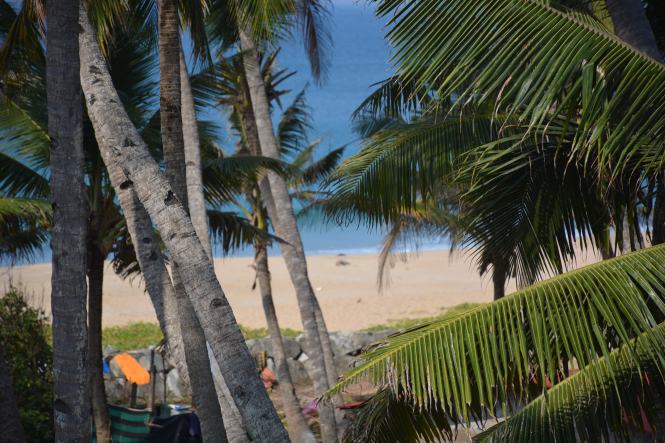 Anyway. I don’t want to talk too much about the Brits because I use their language.

I think not many tourists come to this place. They are tired by their revelries on the ‘backwaters’ to the north and the Kovalam beach and Trivandrum temples to the south. This little place is conveniently forgotten. It deserves a better deal.

We move on in the scorching sun and reach a place a few kilometers away which has a huge fishing jetty and market. It is called Muthalapozi Harbour.I would have loved to watch the fish auction here. From the size of the place it is clear that it is BIG. We are late and have to be satisfied with the stray boats coming in. ( More about this in the previous post No. 84) 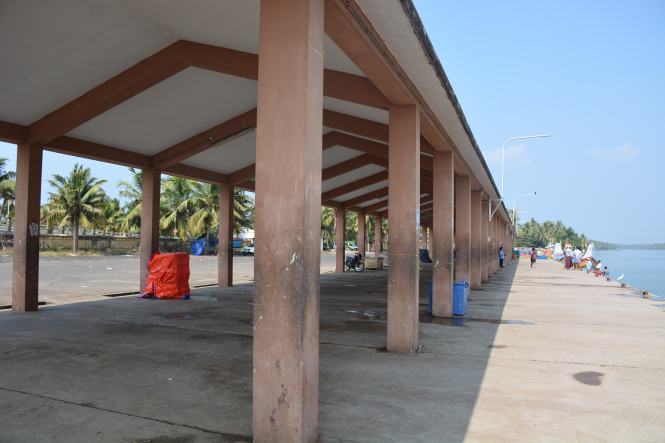 Even the stray boats late in the day bring here a lot of fish.

We move on from here and check-in at a hotel in Trivandrum around the temple complex where vegetarianism is ordained. One has to eat only veggies as a matter of tradition. Fine, let us live it for a day. This is not to say that we stayed in the temple complex. We stayed in a hotel booked on the net. 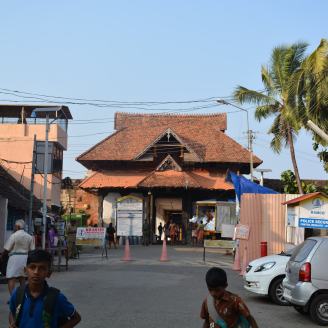 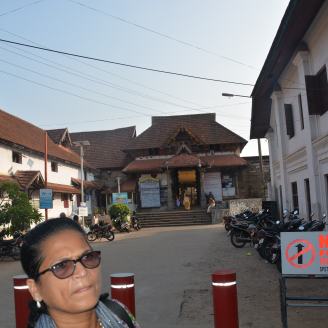 The Temple complex of Trivandrum has a huge security arrangement after the discovery that the complex contains a hoard of gold and jewelry which will take several years to evaluate. It is said that it is the richest religious establishment in the world. May the Goad bless the Special Audit Authority. I wish them a lot of luck.

The rear side of the complex with it’s lake is beautiful. I dont know hat is hidden under the lake or if there are any tunnels which are not known to the Supreme Court of India. 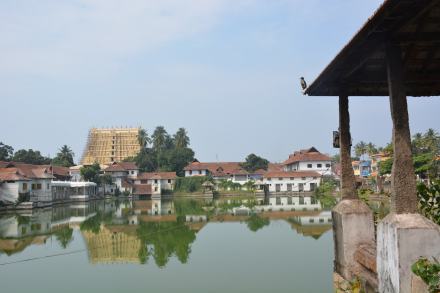 If Lord Padmanabha’s estate is willing to negotiate, I might consider believing in God.

The reason we are not dwelling longer on this place is the Dress Code of the temple. I am not willing to compromise for the sake of seeing some stone idols. I cannot attribute any special value to them. I would have certainly considered it if they allow me to have a look at the gems and jewelry discovered in the faults. Anyway that is not to happen.

We move on to the better places like the seashore. It is crowded but still has some fresh air left. And the Shanmugham beach  has some refreshing sculptures.

We did visit a beautiful a museum in the temple complex. By now I have forgotten about it as they don’t allow photography.

There are a couple of other museums in the city. Cant take pictures inside.Thank you. 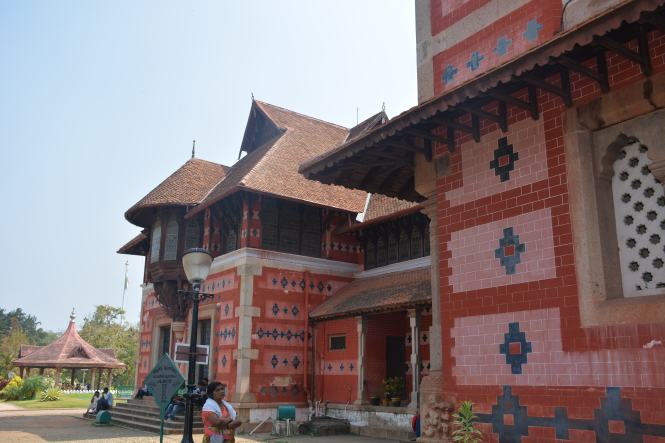 People who come to Trivandrum also visit Kovalam. It is the unwritten law. I did it when I came here first about say twenty years ago. I did not like the place called Kovalam. I will always wonder why people go there.

Having said that, let me make an exception of the Lighthouse. It looks good from the beach. My wife is planning to buy it.

From Kovalam, where we stay the night, to the end of the Kerala territory is not very far.

We have only the beautiful Vizhinjam to deal with. Lovely place. A lot of fish and a lot of religion.

We go straight to the beach and the fishing harbour to find that there is more of religion here than fish.

Jesus is trying to save the world from the high ground across the harbor.

What he looks upon or rather frowns on is the mosques built by the followers of his closest competitor. 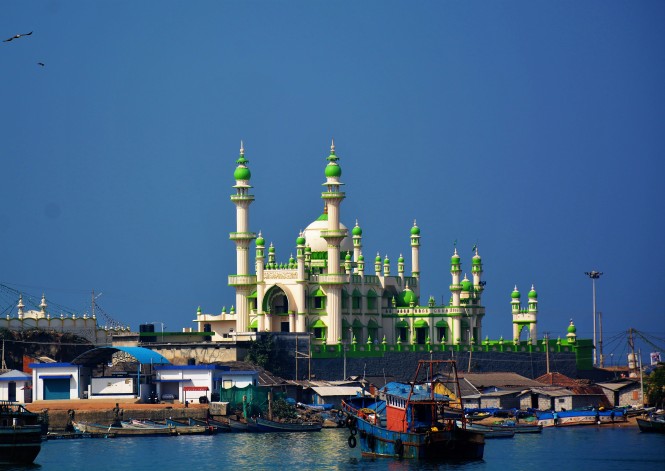 Not one, but two large ones. 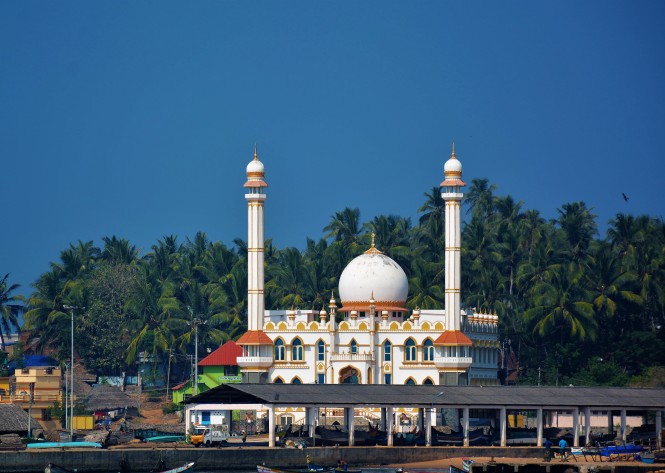 In this whole drama people tend to lose site of the real historical site. Not me. I insist on seeing the old Portuguese Church. The original one. Our Lady of Good Voyage. It is a beauty and it is simple. It has a lot of images inside. Good number of paintings on the walls. 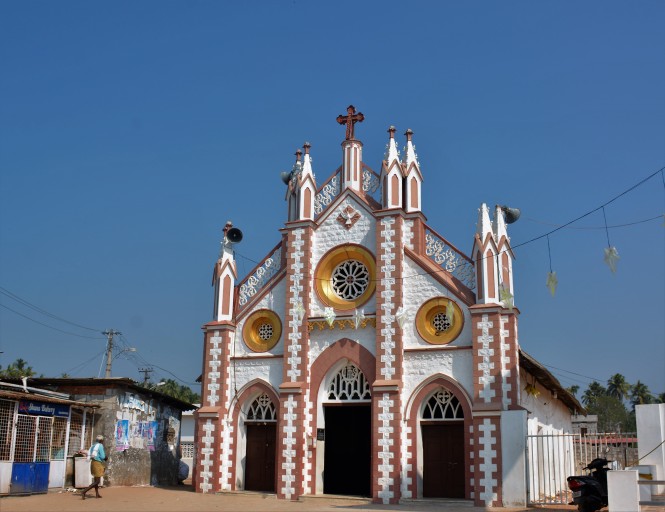 Among the paintings is the one which is relevant to the name of the Church. Excellent marketing considering the fact that the people here are fishermen but the replica of the boat down below is not correct. It should be a fishing boat.

Among the paintings is one depicting the wrong method of crucifixion. These Jews were not trained well in their job of the painter was not briefed properly.

Now, I am tired and I am hungry. I need to have some fish and if that is not readily available I could do some squids if they are available.

We decide to leave this lovely place and move into Tamil Nadu for our lunch. 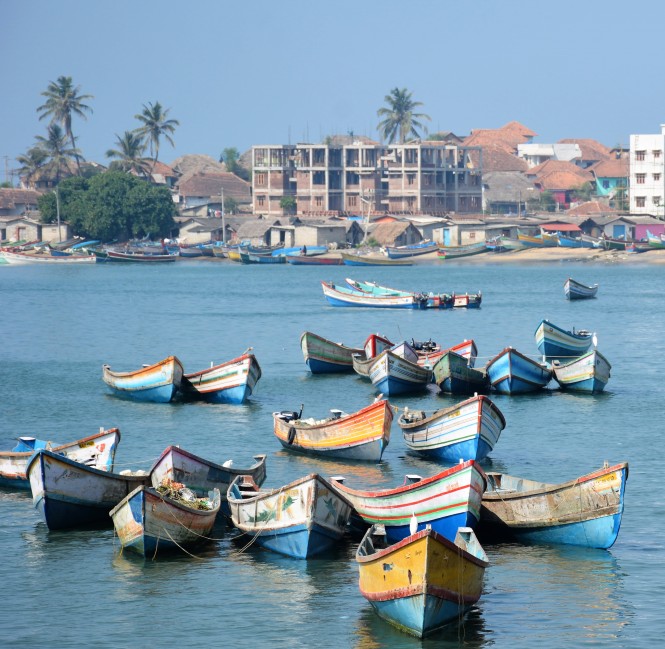 Kerala, the Goad’s Own Country shall always remain a fond memory.