The third part of the title to this post is in the brackets for the simple reason that it is not a place but a festival.

We leave Karwar with a heavy heart. The sea (and Kali river) has been very generous to people of Karwar. They enjoy such variety of seafood that we have not seen on Indian coast so far in this expedition.

When we started TheBlueDrive, one of our friends gave us a clue. The colour of water changes from place to place and we should photograph it. Yes, the colour changes but the subtlety of it is so sensitive, one cannot capture it in a camera and faithfully record it. Modern techniques can change the colour and the texture and the tinge and whatever so much, this exercise would be meaningless. All the same I remembered the advice when I saw the black colour of the waters of river Kali.  The picture below is just an attempt but when you see the waters especially in the creek, it is darker than the rest we have seen.

We pass through the town and proceed towards Ankola. The southern half of Karwar town is dead. Dead because it is under the Armed Forces. When a place becomes a Cantonment or a Naval Base it ceases to be a town. The town or the village becomes subservient to the Armed Forces. The charm of the place is lost to the ‘regulations’. Many of these ‘rules and regulations; inherited from the British were meant to separate the Superior White Man from the Inferior Brown Man and they still separate the Superior Services Men from the Inferior Civilian Men. The road from Karwar southwards is closed to your right by erecting a fence of tin sheets, to prevent people seeing the Naval Base. This looks ridiculous if one understands the power of modern photographic equipment and the Satellites. Defence Budgets shall always remain beyond questioning. It looks like the armed forces do not want their own people to see what the potential enemies can see by other means. The dispute about allowing the annual Christian fest on the Anjediv island still continues.

Anyway. What one can see immediately after leaving Karwar is the presence of a species of Bamboo growing on the hill slopes. You will not see this so profusely in the coastal areas in the nort but a similar species is seen in the interiors.

The night before we leave Karwar we observe that the market of Karwar has a riot of flowers and sugarcane. It would have baffled an outsider to the region. We could guess that the preparations for the festival of Tulsi-Vivah due tomorrow are on.

After reaching Ankola we make a halt at ‘Kamat’ hotel close to the highway with the intention of resting for the day and looking at the Tulsi-Vivah event in the evening. 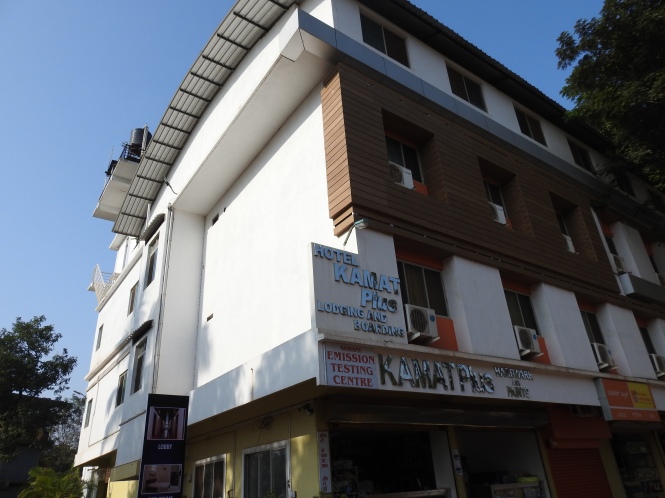 The Kamat establishments are clean and dependable but most of them are vegetarian.

After a couple of hours of rest we decide to go and have a look at the seashore. There are a number of beaches near the small town. We choose to go around north to south and have a look. We drive through the villages preparing for the Tulsi Vivah event in the evening. Lovely ambience all around.

The twin beaches a few kilometres from the town are beautiful. One cannot fail to notice two things here.

One, a temple on the rocks by the sea. The devotees offer firewood to this deity. As we cannot read the Kannada script, we fail to gather much information about this and there were not many people around who could speak the languages we speak. 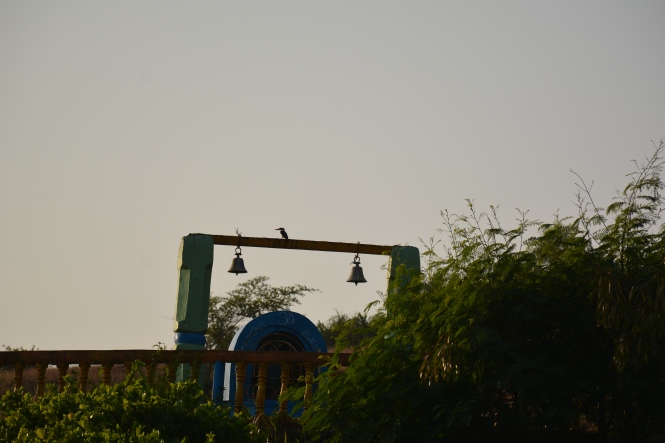 The other thing is the presence of white sandstone. We had observed this stone in Malvan fort in Maharashtra. Now it is acquiring shades of colour which will become brighter and more varied as we move southwards. 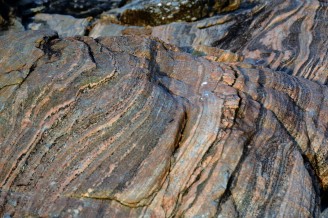 The beach is devided into two by a small hillock. the northern part is a clean beach with the temple at the end. The southern part has a fishing harbour. The hillock inbetween has a quantity of broken beer and liquor bottles giving an indication of its use. 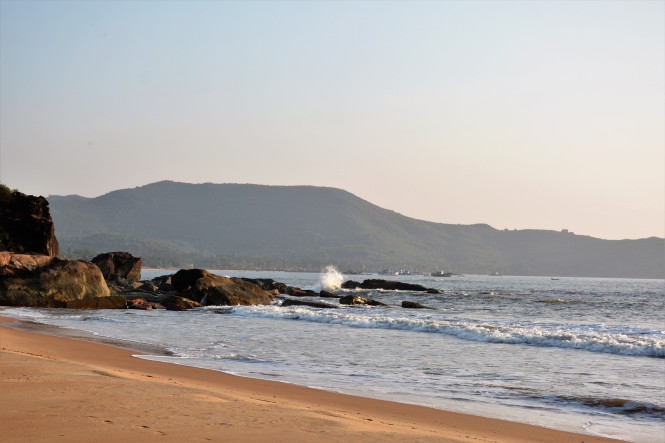 Veena and her camera are after a Kingfisher that just landed on the coconut palm.

We return to the town and proceed to a temple to watch the Tulsi-Vivah proceedings. The first temple we visit has two Tulsis in its compound. Here the Tulsi Vivah is observed as Tulsi Puja. The Tulsi plant and its pedestal is covered by sugarcane brought by the devotees who do not celebrate the festival at their own homes for some reason or the other. 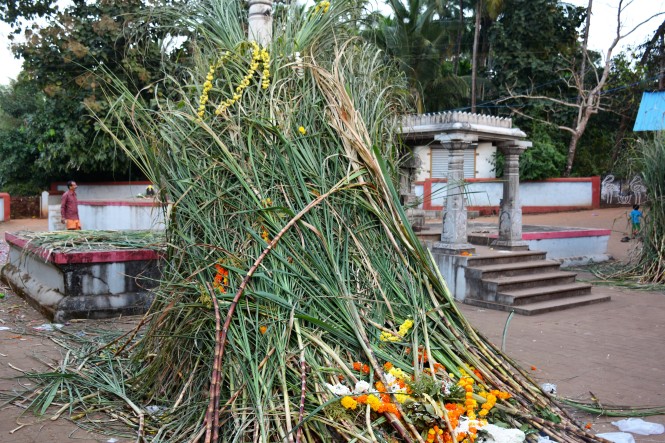 In the neighbourhood people do the wedding in their own compound. Some wait for the village priest to come and do the ceremonies, some do on their own. 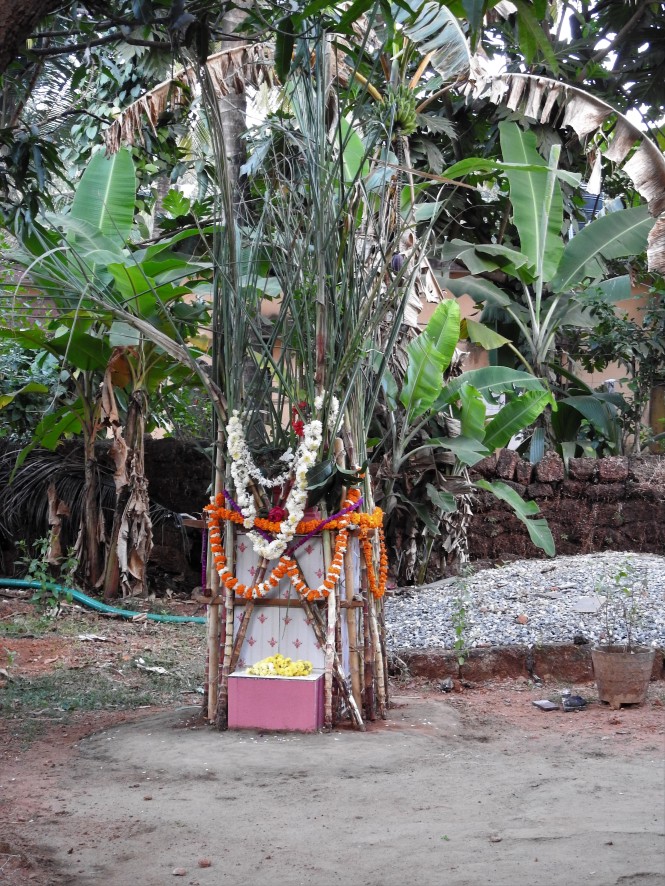 Tulsi Vivah is a very complex story from Padma Purana involving a woman by name Tulsi and Lord Vishnu. The Wikipedia article on the subject is very simple and lucid. https://en.wikipedia.org/wiki/Tulsi_Vivah

Tulsi Vivah is incidentally the Title of 1971 Bollywood movie starring Dara Singh and Jayashree Gadkar, a local girl from Sadashivgad who made it big in Marathi films.

There are many ways the Vivah is conducted. In Ratnagiri and Sindhudurg districts of Maharashtra a full-fledged wedding ceremony is conducted. Here in North Kanara district it looks more like a worship (puja) of the plant. The common item is the sugarcane and the Tulsi plant growing in front of the houses and temples. ‘Prasad’ of puffed rice is distributed. 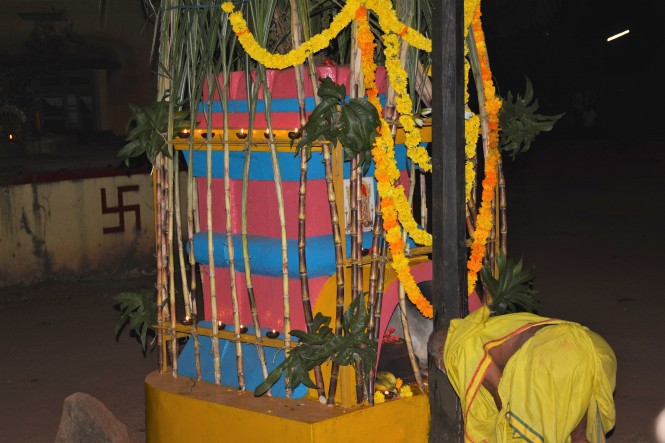 Later at another place near Gokarn we could find this simpler decoration using mango leaves.

Incidentally Hindu weddings stop being conducted during Monsoon months and do ot resume until the Tulsi’s wedding is conducted.

We visit another temple at Ankola to see the actual proceedings in the hands of the temple priest. This was more elaborate and we made videos.

Here the bride as well as the bridegroom were suitably decorated. 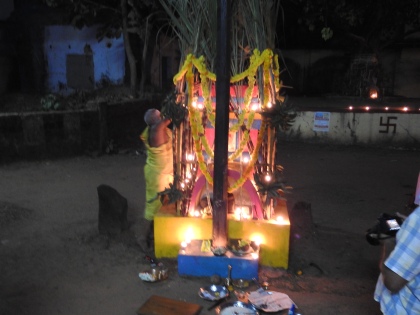 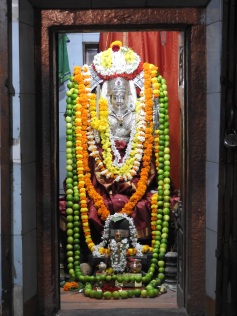 Between Karwar and Gokarn there are a number of small beaches all along the coast. We decided to skip them. There are also a number of temples but none very significant. Ankola has a church called Church of St Paul’s Mar Thoma.

Gokarn is a pilgrimage centre for Hindus. It has the famous Mahabaleshwara (Shiva) temple and half a dozen other temples.

The place located between the estuaries of Aghanasini and Gangavali and also has a long beach which is favoured by western tourist. 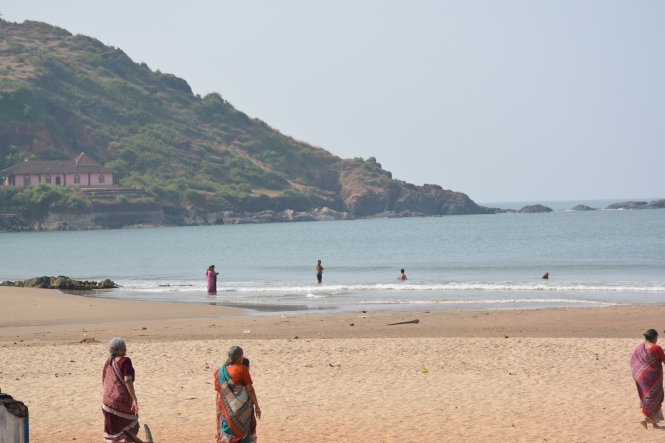 The tourist trade seems to have become more important than the pilgrimage trade.The shops and what they sell will bear this out.

The ladies selling flowers at the temple have been trained by the western tourists to pose for photographs and demand money.

The ‘Malabar Coast’ is supposed to start from Gokarn and end up at the end of peninsular India. However going by the current district nomenclature we are still on the Canara Coast. May be the names are overlapping. As if to prove that this is a part of Malabar Coast, spices are being sold on the roadside near the Gokarn temple, off the large bags as they used to do in olden times. 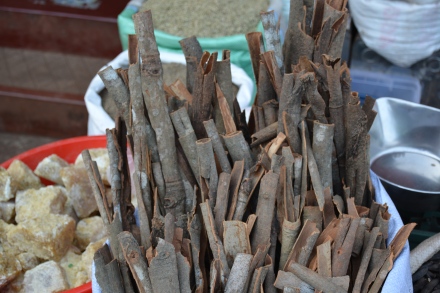 In the following picture you can see the Rath or the vehicle of Lord Mahabaleshwara. It has been dismantled and stored. It will be assembled for His use on the festival days. The mortals have parked their vehicles by the side. 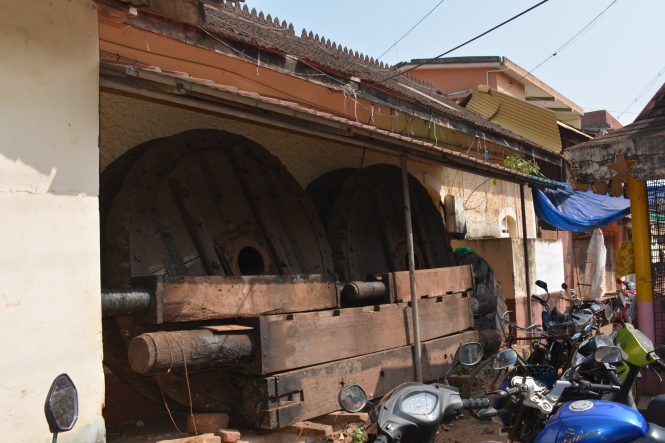 From Karwar onwards you will see this Korean brand of icecream  very prominently wherever you go.

You will wonder why Koreans chose this place to popularize their brand and not other bigger places.

The reason is this is not Korean or Japanese or Chinese as it looks. This is a combination of two Konkani words. Hanga (here) and yo (come) meaning Come Here.