We arrive at Jamnagar to hear bad news. A series of them. To-morrow is a holiday on account of Krishna Janmashathami, everything will be closed, it is raining and will continue to rain to-morrow, the Museum is under renovation and remains closed, the Marine National Park is closed till 15th of October, almost two more months. We had planned for a longer stay at Jamnagar as it is the access point to the Marine National Park. Presumption was that it would open after 15th August the end of monsoons for all practical purposes. We were wrong.

Having come we decided to make the best of whatever was left over and there were quite a few things, lasting us two full days.

Braving the rains, we drive to the Ranjitsagar Dam. The design shouts at you to tell that it is pre-independence creation of Maharajas.

Next stop is Khijadiya Bird Sanctuary. The guards at the station allow us to drive up to the inner gate and not beyond as the sanctuary is closed for the monsoons. It need not be. It is on the land and is not water-logged. Anyway the government knows better. As we turn back from the gate we saw hundreds of tiny frogs jumping towards the salt pans to the right of the place where the gate is. It was an unforgettable sight but did not come off well in photographs.

Among the places advertised as the highlights of the Jamnagar city are:

Lakhota Lake and Lakhota Museum (closed for renovation). The lake shores are incredibly clean and well-maintained. Food and food vendors are prohibited inside. This place and the adjoining part of the lake which has free access are together good for a round of city birding. 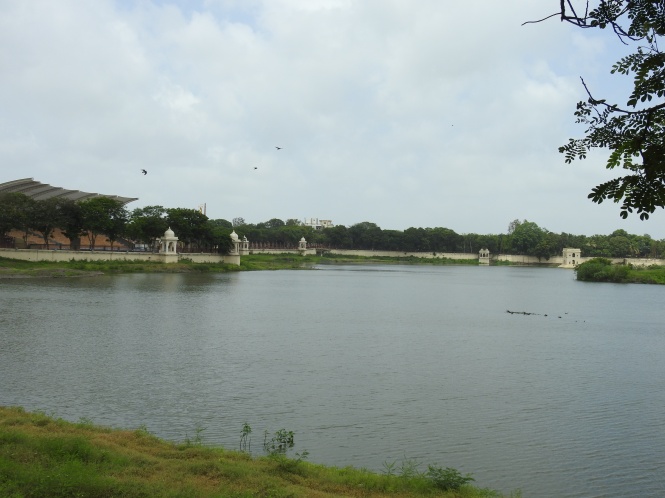 Bala Hanuman Temple is in Jamnagar and in the Guinness Book for its uninterrupted chanting of ‘jai jai ram’ since 1964.

Khambaliya Gate which doubles up as a small museum. 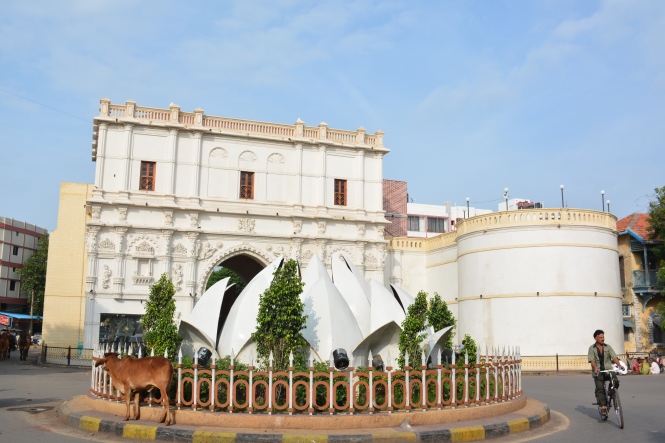 The Tower Of Mandvi looks good architecturally but the way it is occupied, I am sure it must be subject to a lot of litigation.

Bhujiyo Koto is a part of the crumbling Lakhota Fort.

Bhidbhanjan Temple with beautiful carvings. Photography inside is prohibited

Bohra Hajira, a Bohra community’s place with mausoleums, Mosques and other structures.

The Jain temple (there are 4 of them in the city) and Swaminarayan Mandir a little away from the town. There appears to be an ongoing competition among the Jains and the BAPS to build temples. 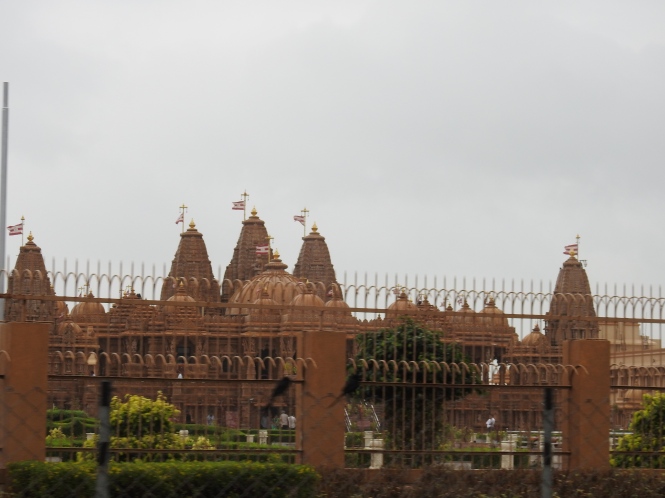 Most interestingly the city prides itself on its crematorium so much so that it appears in the list of places to be visited in Jamnagar. It is billed as ‘Model’ crematorium. For us it would be strange to go to an operational crematorium as a tourists and not mourners. We decided to give it a try. As we near the gate we see a funeral procession entering. We decided to retreat and move on to the world of the living.

In the living world people are busy preparing huge quantities of ‘farari’ food for the Janmashthami celebrations. It is difficult to find a good restaurant in Jamnagar. Most of the people eat ‘paan’, and those who eat other food,  do so standing up at the ‘farsan’ shops. I will remember Jamnagar for it’s huge Paan shops.