Mandapam village is the starting point of a long narrow peninsula which extends close to the Sri Lankan waters. A bridge, in fact two bridges, one for road and one for Rail connect the mainland to the islands beyond Pamban. The road is fantastic. Before you cross the bridge, they charge a toll and in the process, fleece you. They charged us three times the dues and gave us a receipt which we found later to be for lorries. The bridges which are 2 Kms long are a sight to behold. I understand that the bridges are becoming weaker because of impact of excessive photography. 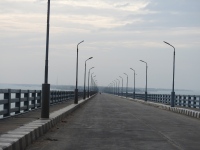 The places as seen from the bridges is another beautiful sight. 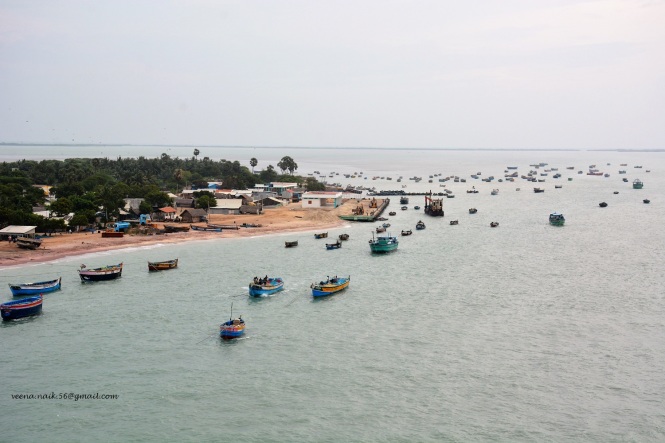 As you cross the bridge what attracts your attention is the Lighthouse to your left. Nice one and good looking from the height. Picturesque.

Rameswaram, located on this island is the main draw of this area. Rameswaram is one of the four ‘dhams’ which are the most sacred places for Hindus. This one is the southern-most. The temple here attracts a large number of pilgrims as well as tourists. 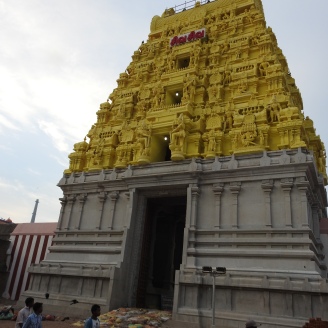 Our engagement with the temples, especially the interiors, have been very limited. It has been inhibited by the dress code to enter and secondly by the fact that most temple do not allow photography inside the temple. People do take pictures with their mobile phones which is prohibited. 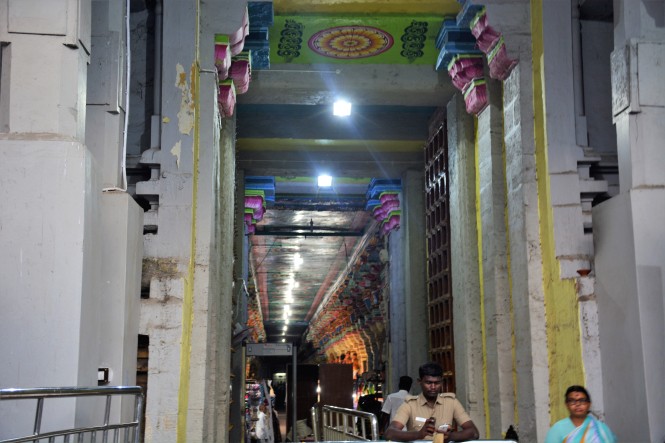 Inside the temple, within the rule.

Apart from being a religious centre, this place is also a major fishing centre. I hope the fishing industry becomes more important than the God industry in course of time.

Dhanushkodi is a remnant of a town which was wiped out in a 1964 cyclone. Whoever thought of building a town here, complete with a railway line did not consider the possible fury of nature unleashed through the medium of cyclones. The town in the mouths of two open seas and in an area known to be affected by cyclones was a planned disaster. It is being revived. 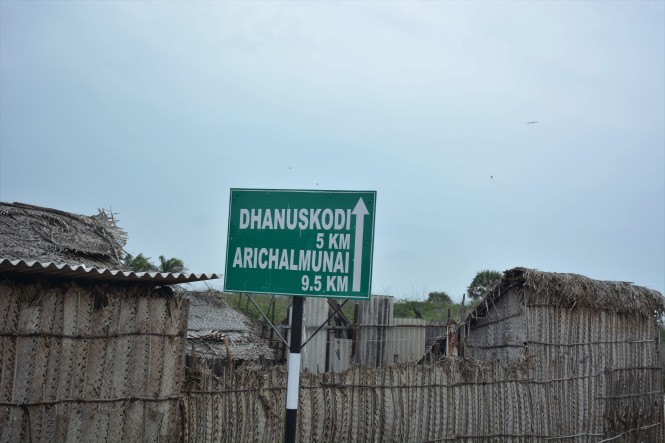 There is new road which goes up to Dhanushkodi and beyond. When we visited, it was not inaugurated and therefore not in use although it was well beyond the schedule as appearing on this board. 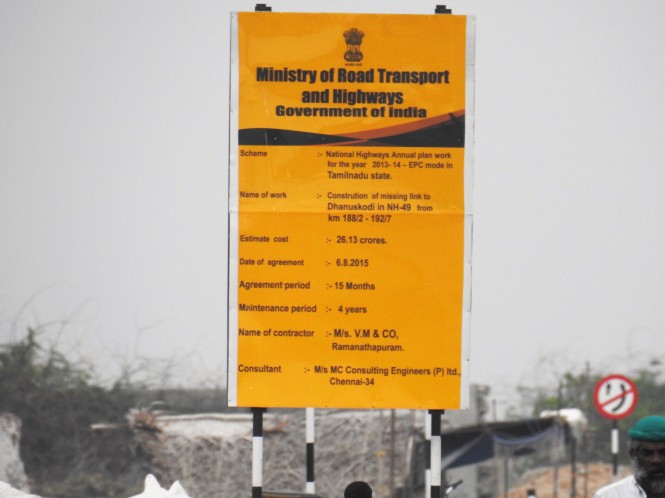 There appears to be a lobby of vested interests – the vehicle owners. The vehicles that drive you dangerously along the beach and take you to the ghost town. This is the main income generating industry which will be dead the moment the road is opened for traffic. 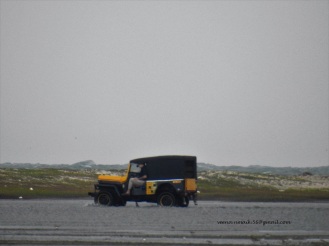 Adam’s bridge, Ram Setu , Palk Straits are the various names by which the gap between India and Sri Lanka is known by. It has a number of theories going back to the Epic, Ramayana.

Dhanushkodi is a haunted place. One can describe it only in pictures. 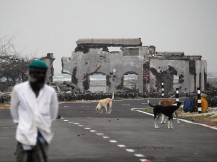 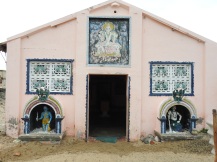 This boy in Dhanushkodi is persuading the girls not to go to school and to join him at play.

We finish  this mandatory trip to Dhanushkodi and return to Rameswaram, after visiting a temple on the way. This is an added tourist attraction. Kothandaramar temple is a place fom Ramayana. The signboard explains the significance of the shrine.

The most famous son of the soil in this part of the world is the scientist and former president of India, Dr Abdul Kalam. His family comes from Rameswaram and had trading interests in Dhanushkodi. We made a visit to the place as a mark of respect for the remarkably unassuming public person in recent history of India. 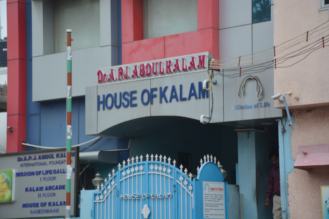 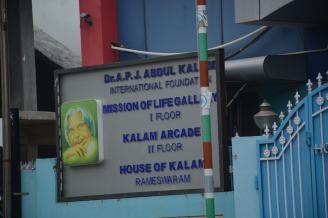 There is a lighthouse at Rameswaram, other than the one we saw whilst crossing the Pamban bridge. This one is right at the seashore. It is not easy to approach. One has to go through several seaside villages till you come there. The evening ride on the narrow village roads is pleasant. Try this place when you are in Rameswaram.

The other Lighthouse in the area is overlooking the Pamban bridge and is called the Pamban lighthouse.This is the one we saw from the bridge earlier.

Here you will also find a peculiar type of commemorative pillar. A couple of them are found after you cross the Pamban bridge towards Mandapam. A few of them are found in the area as far north as Kilakarai. The man at the lighthouse informed us that these are memorials for British soldiers serving in that area.

Rameswaram has this tall tower about which we failed to gather any information.

Ramanathapurm is a district headquarters and the gateway to the places that we visited above. We had decided to make a halt at this place after we are done with Rameswaram and use it as a pad for travel towards another remarkable region of South India known as Chettinad.

Ramanthapuram was a principality ruled historically by a local dynasty which was touched upon in the previous post in the context of Kilakarai. A palace still exists and we made time to make a visit although it was closed for the visitors at that time. We missed the interiors. 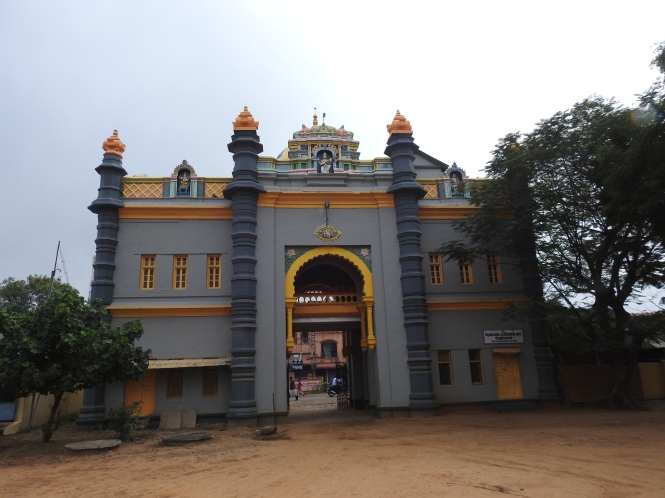 The 17th century Ramalinga Vilasam Palace was built by the Sethupati kings. The palace interiors have some famous murals which we missed. They are said to depict the Sethupati kings’ battles with the Maratha kings of Thanjavur, among other events in the kings’ lives. 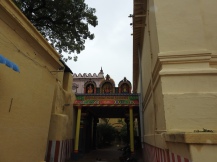 The palace entrance and the temple attached to the palace.

We missed the murals inside the palace but the exteriors are interesting as well. 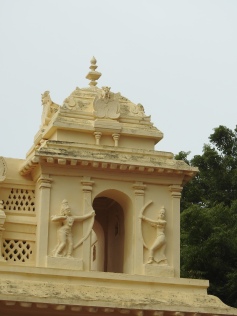