The 102 Kms of coastline of Goa is famous for some of the best beaches in the country making Goa a major tourist destination. Very few people are aware that Goa has had 40 forts. About 11 still exist in various states of repair or disrepair. TheBlueDrive would like to take you around 7 of them, nearest to the coast.

Normally rivers form the boundaries between two different political entities. The most natural boundary between Portuguese India and British India should have been river Terekhol. But no. History created a small Portuguese exclave to the north of river Terekhol which has been inherited by state of Goa. The Google map shows an incorrect boundary.

If we are to look at the forts of Goa which is the topic of this post and go from north to south as this expedition is proceeding, the first fort that one comes across is the fort or the fortress of Tiracol. The river is called Terekhol , so is the village. Logically the fort should also have been called the same. Anyway.

In the Google map the state boundary runs through Terekhol river and the numerous Bars & Restaurants are shown on the Maharashtra side. Those and the Church and the Fort (which is not shown) are part of Goa.

This fort was built by the Raja of Sawantwadi in early 17th century. The rulers of Sawantwadi and the Portuguese fought a number of battles and as a consequence of one of those the fort captured by the Portuguese in 1746. It appears that the fort was regained by the Sawants later on. The northernmost three talukas of Goa were still under their control until 1814 when they were handed over to the Portuguese permanently in exchange for their assistance in fighting the Kolhapur branch of the Marathas. History teaches us that in this world there are no permanent friends or permanent enemies.

The fort or what is left of it is a small place enclosing a church. It has been renovated and is being used as a heritage hotel.

The Church is still in use and an annual feast is held. The village has a sizable Christian population.

Across the Terekhol one can see people at the Keri beach in Goa proper.

The second extant fort overlooks both the river Chapora and the Arabian sea including the Vagator and Morjim beaches, one on each side of the river. It is called CHAPORA FORT, pronunced Shapora.

I am not sure if this fort built by the Portuguese in the year 1717 on an existing fortification served any military objectives. The one purpose it has served for sure is to prove their aesthetic sense. 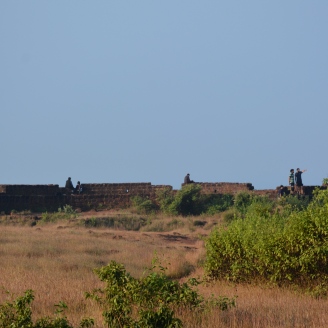 The views are beautiful. This is the Chapora river and the islands and a sandbank formed at its mouth.

This is where it meets the sea. You can see the Morjim beach. 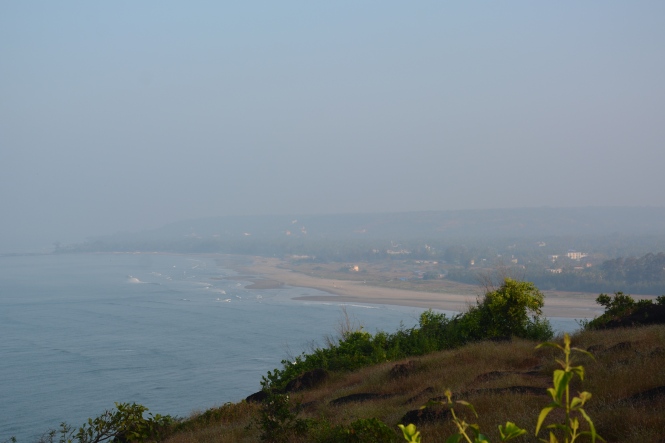 On the south side is the Vagator beach.

A gentle cliff protrudes into the sea from the fort. 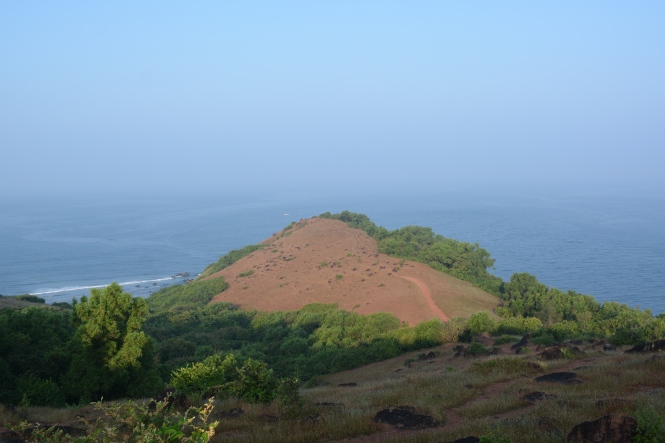 The path on the lower part of the cliff used by Peacocks for their morning walk. 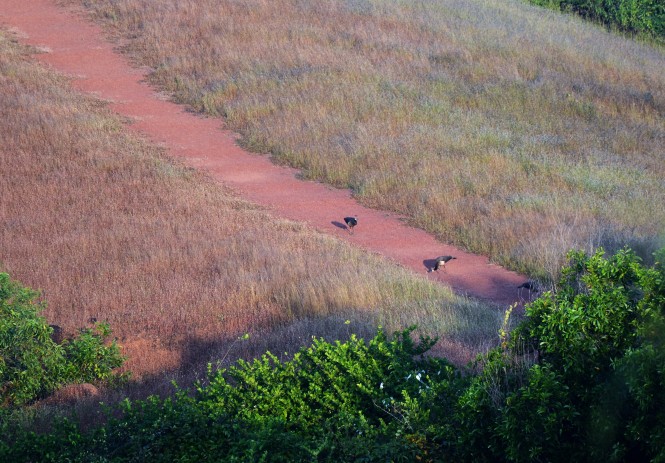 The third fort we take you to is bit inland but within 30kms range from the sea that TheBlueDrive maintains. This is the Corjuvem Fort, Fort de Corjuem in Portuguese. The history of the fort is not well documented but the Desais ruling this part of Goa before the Portuguese arrived said to have built it. This is a small fortress and not much visited. Furtunately it is in exceptionally good condition.

Corjuvem is to be approached throgh the village of Aldona via Mapusa or across the Mandovi from Raibandar and Chorao island where you can see the Salim Ali Bird Sanctuary. 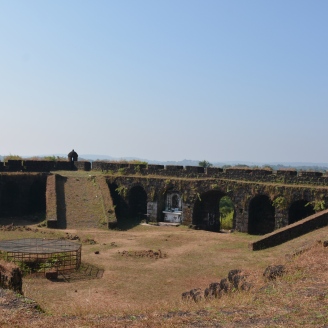 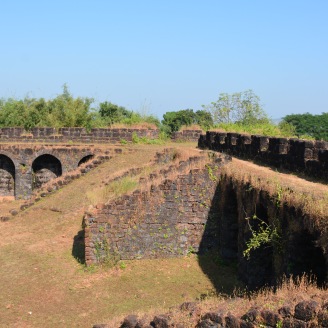 It is on record that inthe early part of 19th centuary the Portuguese used this fortress as military training institute.

The arch at the entrance is intact and so are the Portuguese inscriptions on it. 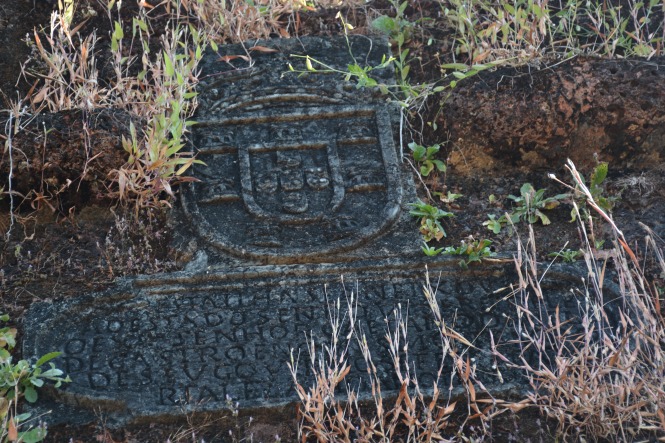 This design of the watch-tower is seen many of the forts of Goa.

There is an interesting aside to the history of this fort. One Portuguese woman wanting to travel the world, disguised hereself as a man and travelled. Ms Ursula e Lancastre landed here and and her true identity was discovered very shortly. I can only say that the men occupying this fort at that time were overly curious.

Let us move on to the next fort. This is perhaps the most important one  militarily for the Portuguese. In the 18th century the Portuguese were competing with the Dutch and the Marathas for the control of the territories in this part of the world. They had to be kept at the bay. And the bay in this case is the Mandovi river on the mouth of which is located the city of Panjim, the capital then and now. The river also allows access by water to the interiors of Goa.

In 1612 the Portuguese built the Fort Aguada at a strategic location to control the sea access to Panjim as well as what was called Lower Bardez, the places to the north of Mandovi river. 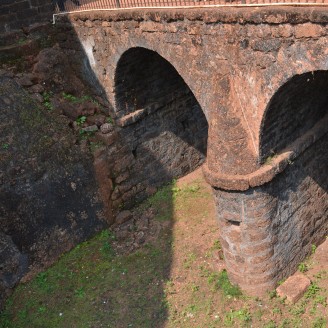 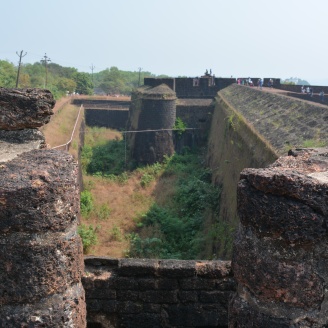 This must be among the most visited forts of India as it is placed on the schedule of all domestic Indian tourists by the operators. It is also the most well preserved and maintained. To the credit of ASI sufficient information is also provided not only about this fort but also about all other forts of Goa. 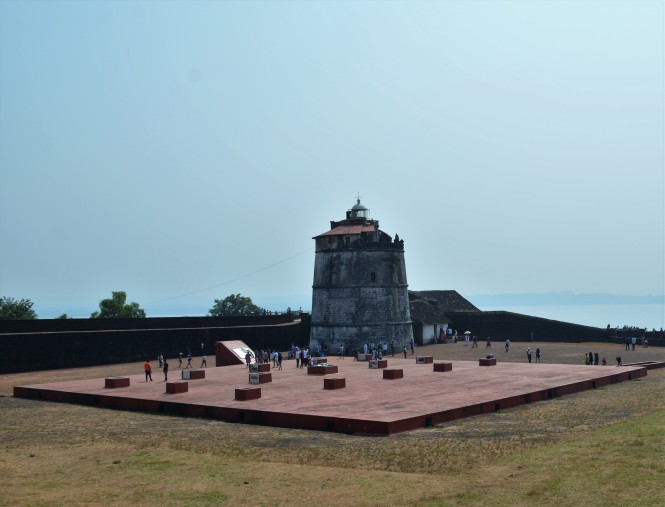 Going towards south and closer to the city of Panjim, just across the river you see the Reis Magus fort, perhaps the most significant historically.

Said to be built by Adil Shah of Bijapur c. 1493 which is before the Portuguese arrived, this fort served the same purpose as Fort Aguad. This fort is said to have been occupied and improved upon by the Fransiscans. The first church in Bardez ( which corresponds to north Goa) is found here, next to the fort. Reis Magos is the Portuguese equivalent of Biblical Three Wise Men.

Between 1798 and 1813, the British occupied this fort. During the last days of the Portuguese the fort was used as a political prison. Many of those challenged the Portuguese rule have slept in its cells.

Until recently the fort was in a dilapidated condition. It was the Tourist department of Government of Goa who took the initiative to restore the fort and make it a tourist spot. They have greatly succeeded in their objective. The architect Gerard da Cunha has paid attention to every detail. 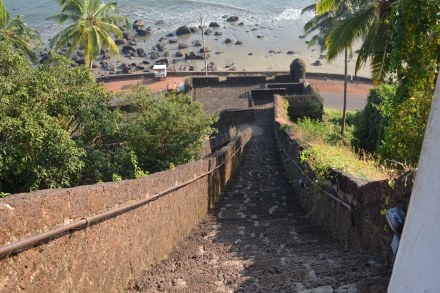 If you take the road inthe first picture above, you can reach Fort Aguada.

The admission ticket includes a free ride to the top of the fort which now houses a permanent exhibition. The infirmation and photographs of the people who spent time here after opposing the Portuguese rule is displayed among other things. 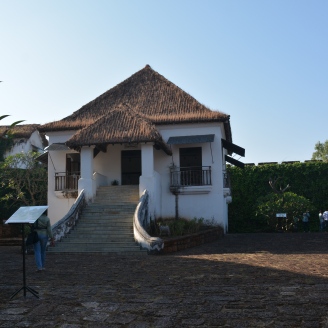 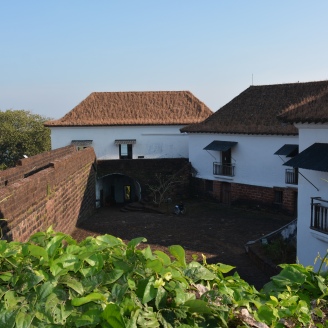 From the fort you can see the last bend in the river Mandovi before she meets the sea. The building on hill to the left is the Legislative Assembly. The boats floating in the river are the Casinos. 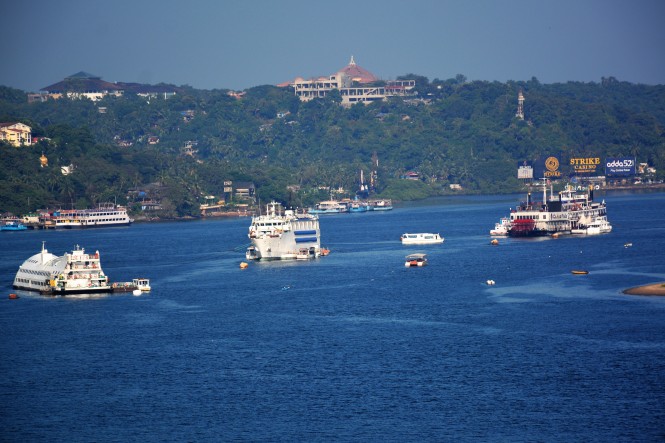 The Raj Bhavan, the official residence and the offices of the state Governor are located at a place called ‘CABO’. cabo was once considered a fort or at least a Fortress. The security at the gate flatly denies existence of any remains of this. So take a picture of the gate and move on. Dont argue with ‘security’, they can deny the existence of the whole state. 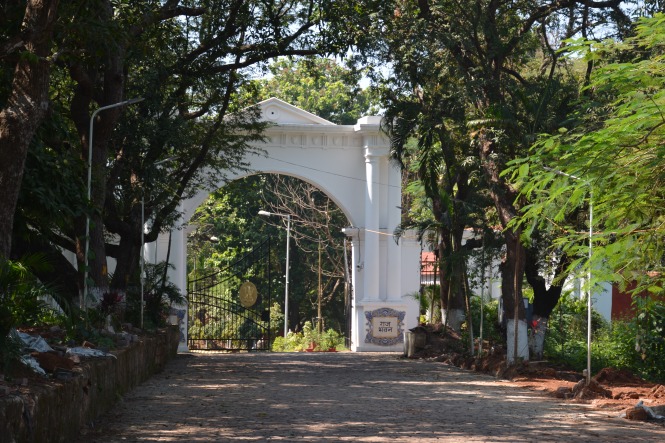 This ends our tour of the Forts of Goa- North.

The forts of South Goa start at the mouth of the river Zuari which separates the Soth from the North Goa.Mormugao, the port city also had a fort. We could not trace it. May be we did not try hard.

That brings us to Rachol. This fort barely exists but was important in historical times. it is located inland, on what used to be called the Ilha de Rachol, the island of Rachol. Rachol is no longer an island. The fortifications were from the gate which still stands and the river Zuari. 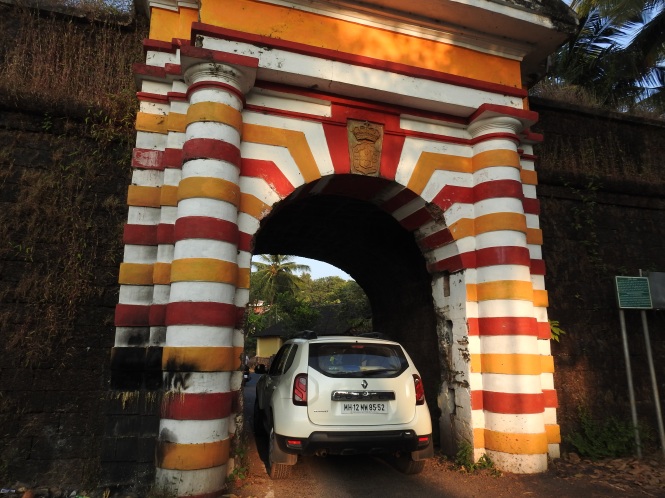 This gate barely takes a car. A bus cannot pass. This is the reverse side of the gate and is not painted. 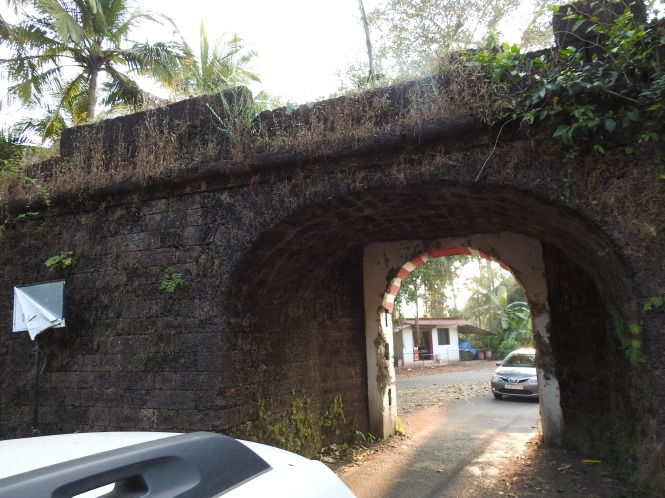 This is the Coat 0f Arms(?) of Imperial Portuguese government as appearing on the gate.

The riverside of Zuari is perhaps as it was when the invaders came – serene.

Now we are left with one fort which is the southernmost but one  of Goa’s forts.

Cabo de Rama is located between Betul and Canacona two coastal villages on the southern coast of Goa.The fort was built by the later Vijaynagar kings and was inherited by  Raja of Sunda or Soonda and was later captured by the Portuguese. A largish fort on cliffs overlooking the sea. 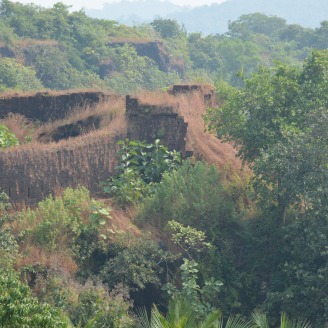 I am tired of complaining about the maintenance of the forts. I think the solution is to privatize them as tourist spots and charge a fee as has been done at Reis Magos.

The entrance and the moat of this fort are impressive.

The scenary down below is lovely with a rocky beach and forested hillsides. 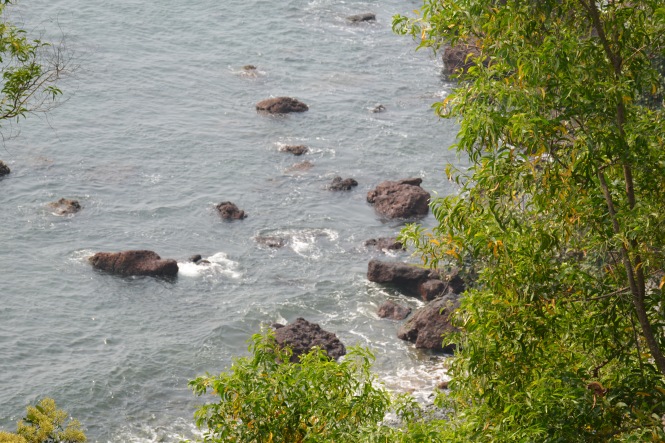 Mrs Neeta and Mr Dilip Kanyalkar from Nashik  join us for this part of TheBlueDrive. 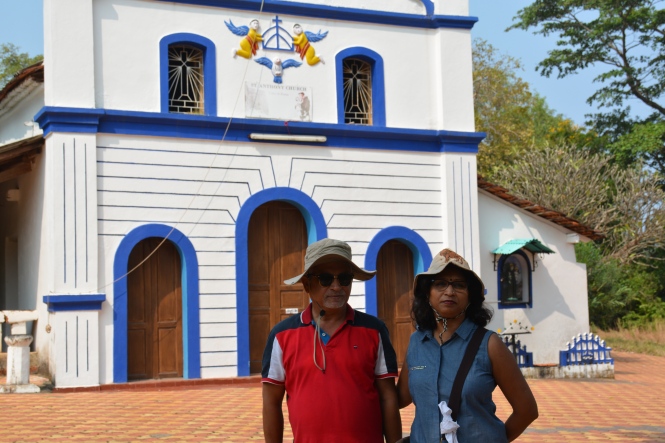 The chruch in the background of this church is functional and an annual feast is held. 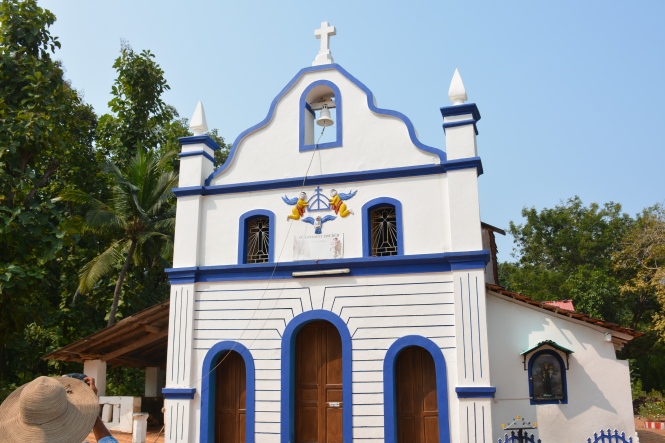 This combination of Blue and White is seen quite often in Goa not necessarily on Churches. There are many other structures sporting this combination. here with the addition of yellow for the angels, it looks all the more pleasing although the angels are a bit too fat for flying.