After Achara we drive towards Malvan, the next sizable town. Achara has a long seaface extending up to Talashil and beyond. However, there are no proper roads connecting the sea. The nearest road is close to a kilometre and is called Malvan-Achara road.

We try to reach a beach called Tondavali and drive towards it. There is no access by car. One has to walk down the small cliff to reach the sea which is in continuity with the Achara beach.

Whilst we look for ways and means to reach the main road, we come across this phenomenon at Vayangani. It is called Vaingan.

You will find a number of villages with same or similar names in this region. It derives its name from the word ‘vaingan’. It means fields or crops not grown on the monsoon rains. This phenomenon occurs in the Konkan region where there are land depressions between the foothills of Sahyadris and the Arabian sea where water accumulates in the rains. These areas are used as water storage facilitie. Later on a crop, mainly rice paddy , is grown here as the water starts drying up. At this time the main cropping area is dried up.

It is later October and in a normal year we could have seen ricegrowing here. This year there were later showes as later as early October and the wetland is still flooded.

If you come here a couple of months later, you will find a differenmt picture.

The land use pattern has changed in many parts particularly in Goa where this was common once. At Vaiguinim in Sindhudurg district you can see this as perhaps it occurred a thousand years ago. Some important aspects of life go unnoticed or are ignored whilst some mounds of stones called Forts are celebrated as ‘historically important’.

Here is the other side ,the seaward western side. The excess water drains to the sea and may be used for farming on the way.

The sea is not far away. The excess small fishes from there are dried here.

The boys have just come back with some fresh squid which seem to be found on this part of the coast in abundance.

After this we give a miss to the Tondavali beach as originally planned and look for Talashil  beach. For this we drive to a village called Hadi and ask for directions. This is a very interesting place.Look at the Google map below:

Gad river comes flows from the east towards the sea, is obstructed by some hills on the way and takes a southward direction close to the sea and in the process forms a peninsula about 3 Kms long. At its lowest point it is about 50-60 meters enabling you to throw a stone at the sea from the river.The place is inhabitated and even has some places to stay. The beach is clean. 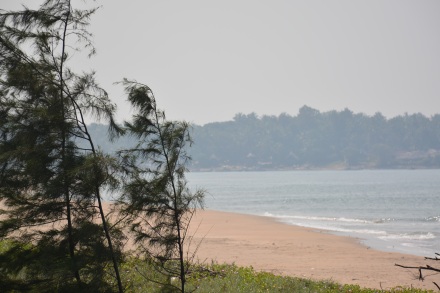 From the end of the peninsula one can see these roacks in the sea. We are told that they can be approached by a boat and young men do visit them. 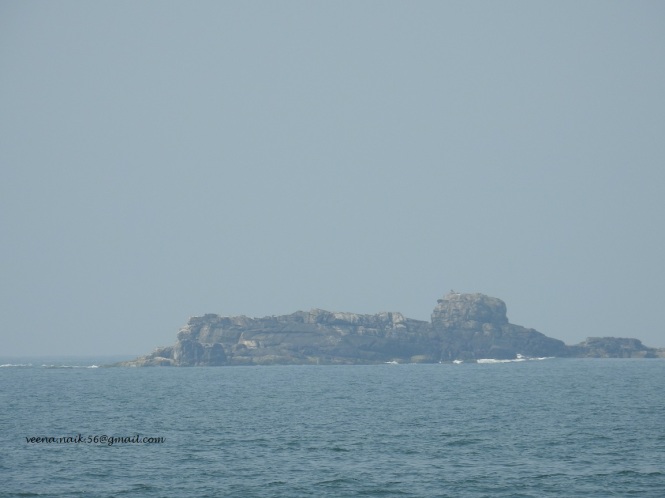 The fishermen bring their fish from the sea on to the road in this manner.We have not seen this elsewhereso far.

OK, now get back to the main road and go south looking for a fort called Sarjekot. That brings us to the place by the sea on the opposite side of the peninsula. You can see the river and the end of the peninsula to the left. 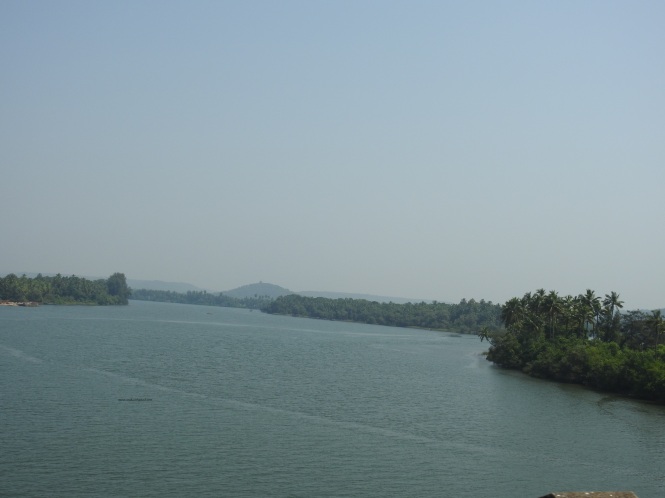 What about the fort?

‘Which fort? There are some rocks out there. Not worth going there. plants have grown and nothing can be seen’

I take the fishermen’s advice. I always do as they bring me my food. Speaking of food, we are now hungry and rush where we can find some. Malvan. 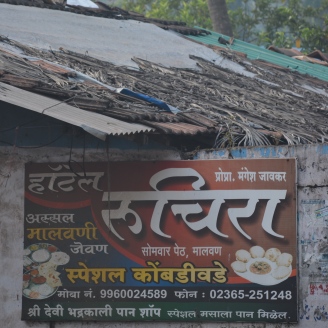 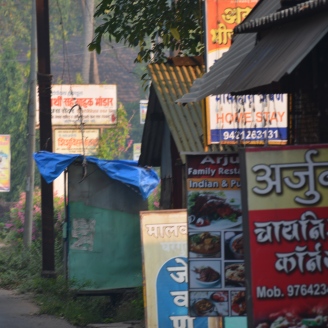 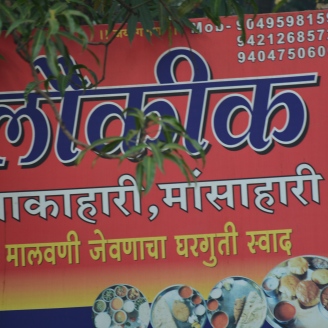 The whole town seems to be selling food. Most of them advertise ‘malvani’ but also sell all other kind of food to the travellers.

Malvan has given us two important things. The ‘malvani’ version of Konkani language and Malvani cuisine. We will look at the first one in another post later. First things first. Malvani food.

Look at the menu at the bottom of the bottom right picture. You will have some idea of what is cooking. There are 11 items of seafood and 3 types of meat. The 11 seafood items include 3 shell fishes (including a crab), a shark, one squid and 6 proper fishes.

‘Ghavan’ is a rice chapati that you see in the first picture ( with a dish of crab). For the Mumbai (and other cities) crowd there are the usual pomprets and Kingfish. These are the people who are yet to graduate into eating Mori (shark), kalve ( the small shellfish) and Mhakul ( squid) etc.

Kombadi-vade is an old favourite. It is a chicken ( free-range, not the ‘poultry’) and fried ‘vade’, made of rice.

The main ingredient of Malvani cuisine is of course, the seafood. The others being coconut, red chillies, onion and kokam. These are fairly common items but the trick is in how they cook, not what they cook. It is delicious all the time.

Probably the main reason, apart from the beaches, for the people to visit Malvan is  the Fort. The Sindhudurg Fort. 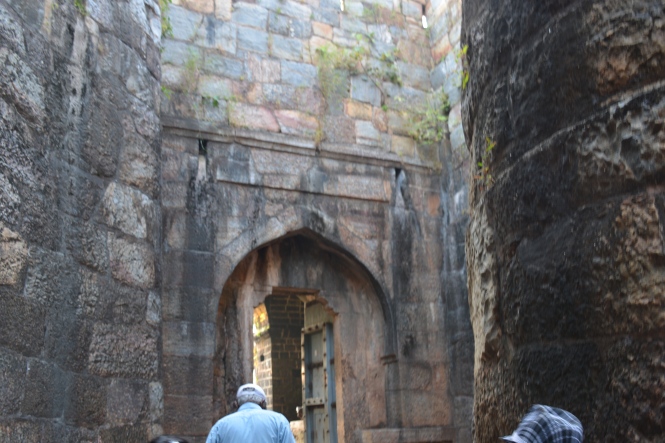 This fort was built in 1668 by Shivaji Maharaj on a rocky island off Malvan. One has to take a motor boat to cross from Malvan. The sprawling fort has a small resident population but visiting are not allowed to spend the night there. 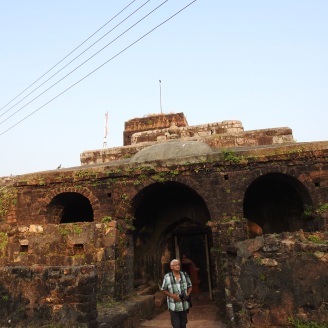 The fort has a temple where the deity is King Shivaji.

What strikes the mind in this fort is the presence of sandstone on a large scale. Most of the ground is covered by this white or pinkish white stone.

There used to be a coconut palm on this fort which had a branch. Rare phenomena. It no longer exists. It was struck down by lightening. Only a picture exists. 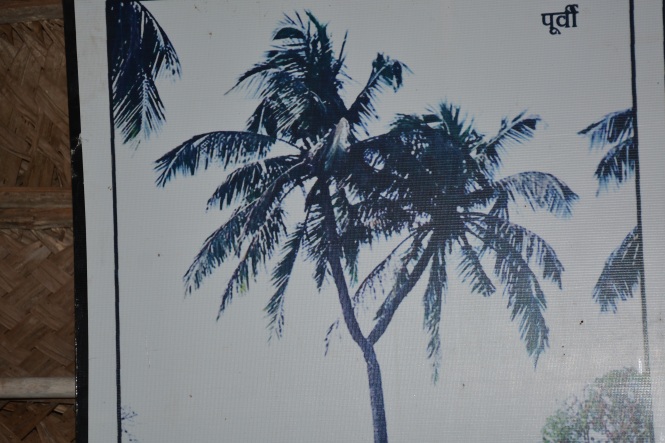 We return hurriedly to the mainland by the boat which allowed us only 45 minutes to see the fort. I think the purpose of taking people to the fort is to ensure business for the various shops selling all kind of drinks and eats.

The next morning we get up and are reminded that we have not been to Shri Brahmanand Swami’s Samadhi. We proceed there although we have to go backwards. We should have visited this place the previous day on our way to Malvan.

I have visited a number of places where the Holy Men take their ‘samadhi’. I feel that these guys like the moist dark places like caves, devoid of sunlight or fresh air. I dont know why. 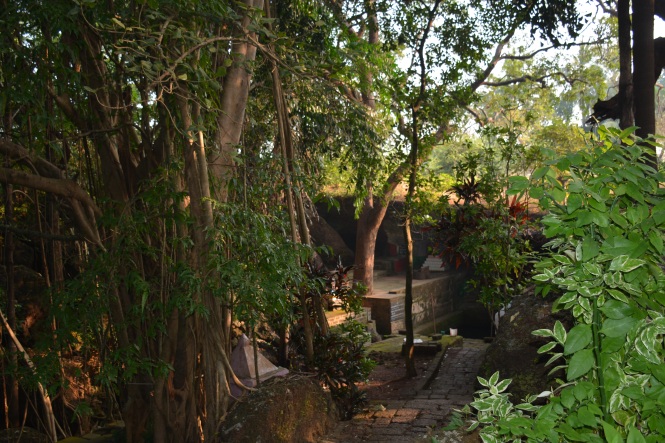 This was later but before that we had to have a little breakfast. There is a restaurant, unnamed, near the main autorikshaw stand and we decide to have it there.

Being a person interested in all things old and antique, I enquire of the owner about the age of the place. He refers me back to a photograph hanging on the wall. His grandfather -died a hundred years ago. He was the founder of this business.

Going by the picture and the marble-top tables below, I put the age of this restaurant at 150 years. The glasses for tea are of recent origin and so are the plastic chairs. When this restaurant started plastic was not invented.

Ghosts of some of the old customers are reported to be having tea here at night. 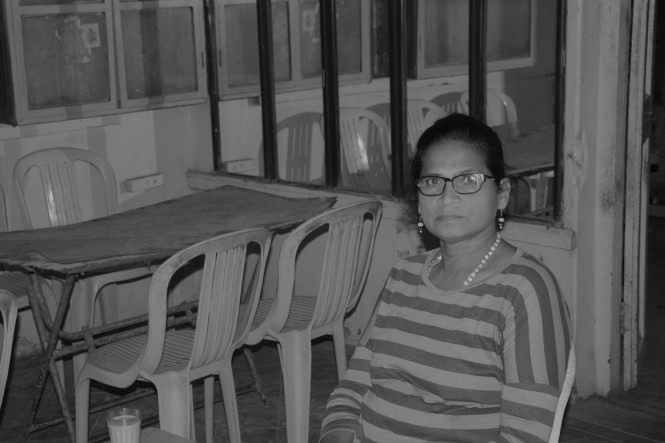