Harne is an interesting place. Very rarely do you find a place claiming within its precincts four forts, however small. This has been made possible by historical events. It is beyond the scope of this blog to go into the historical details but I will make an attempt to explain what is found on the ground with some photographs, of course.

As you enter the complex from the eastern side towards the fishing harbour, you will first find a fort called Goa. I don’t know anyone who can explain this name but it is certain that this place is not related to its namesake territory down south. The origins of this fort are shrouded in mystery but we do know that the Dutch were among the European powers that was associated with this fort. The others were Kanhoji Angre, the British, Marathas and Peshwas. It was ruled from 1818 onwards by the British and the accommodation for the soldiers was found intact until recently. In fact, about 15 years back a part of this fort was occupied as a Hotel run by Maharashtra Tourism Development Corporation. I have spent a night here then. Today it is in ruins, used mostly as a public toilet by the locals. There is no way one can enter and look around. The vegetation is thick and the place is smelling bad. 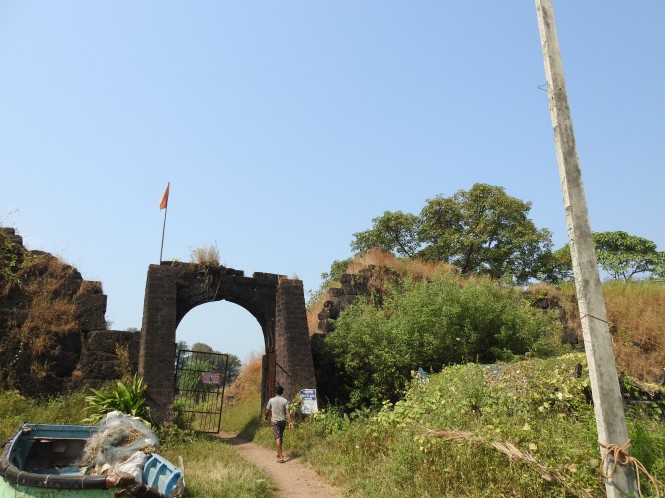 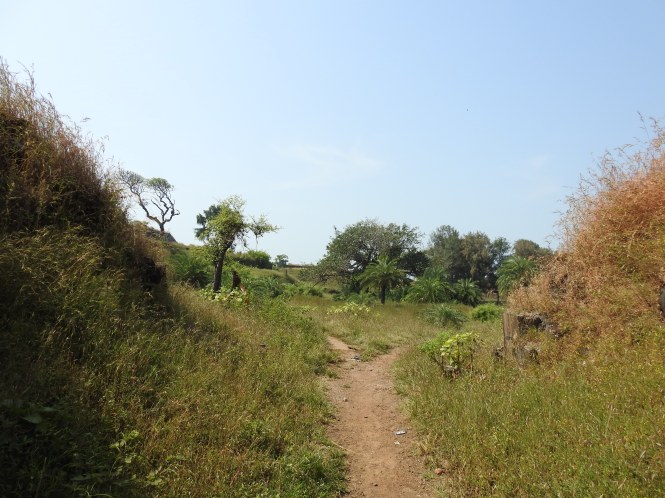 The rear side is in a slightly better condition.

We move on and proceed to Kanakdurg, the smallest of the four. It is said to have been constructed ( along with Fatehgadh) by the Siddhi of Janjira, Khairatkhan in 1700s. This is too small a place to be militarily important but must have been used like a watch-tower to keep a tab on the other three forts.

It has a functional lighthouse. Apart from this it is used mostly for drying fish and mending nets.

From a photographer’s perspective, this is an important place. One can see all the activities in the fishing harbour comfortably from here.

You must have thought that the Bullock cart is a land vehicle. No it is not, at least not here. 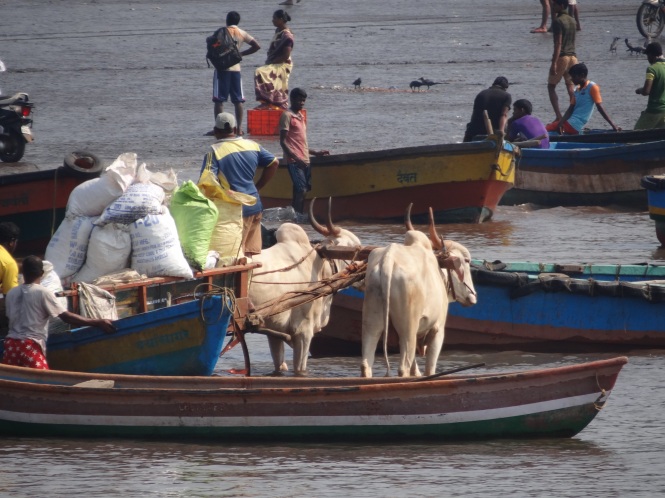 Lower still is infested with crabs and birds. They co-exist, don’t eat each other. 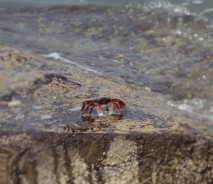 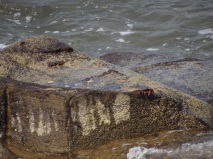 Fattedurg or Fatehdurg is the third fort in the complex. It is totally and completely occupied by the fishermen. One cannot even believe it is a fort. 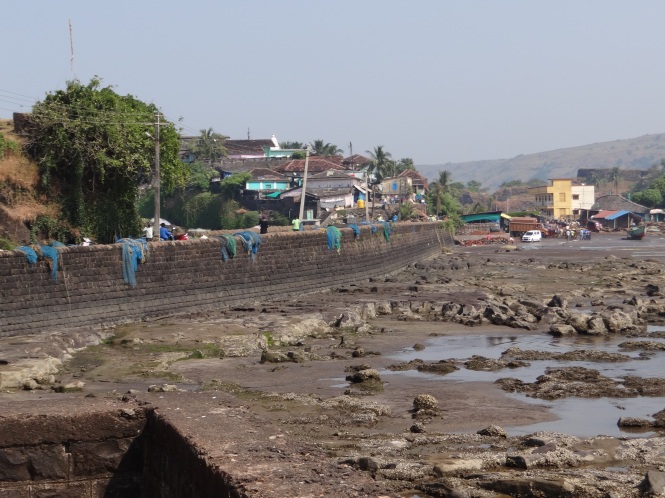 The last and probably the best of the four is the Suvarnadurg, This is a sea fort and can be accessed by boat. There are no dedicated boats. The fishermen take you there when they are otherwise free. Right now, they are not. The boats have arrived in the harbour and have to be offloaded.

The last picture above gives you an idea about the distance between the Goa fort and Suvarnadurg.It is quite small.

Built in the early 18th century many structures in the fort are said to have survived, largely due to the fact that the access is not easy.On the harbour side you can see this roof made of coconut palms. 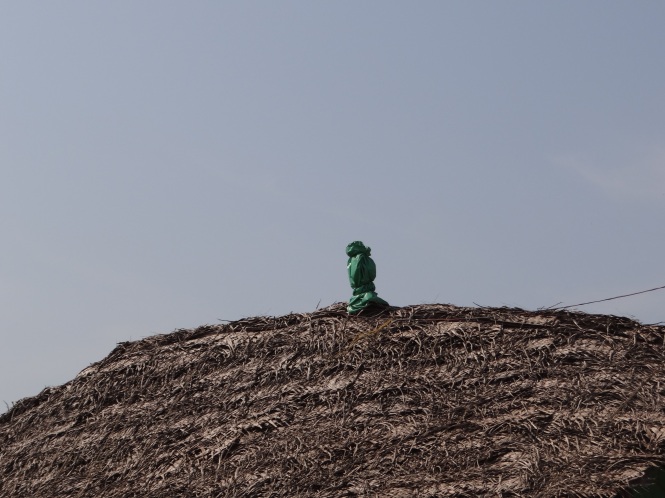 It is a shed for the fishing boats. This is the traditional way. The modern way is to use plastic. 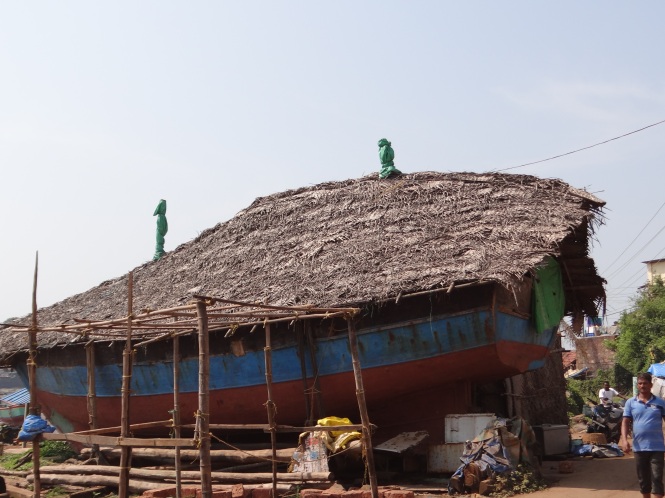 The next village is Murud,the native place of the great social reformer and founder of SNDT University, D. K. Karve. 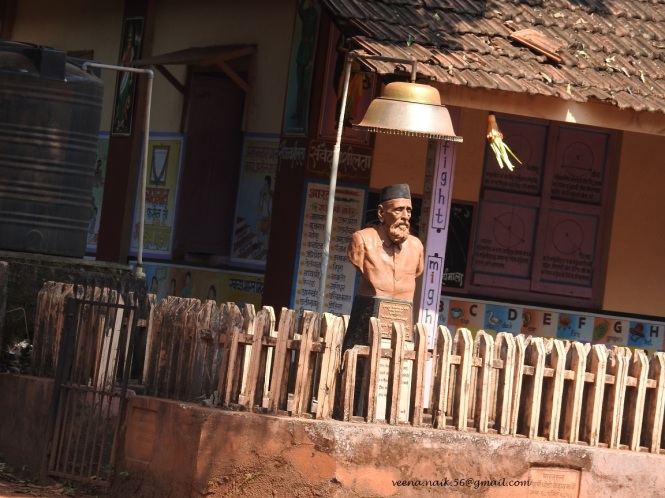 Next to this statue is a temple of Durga Devi. Curiously, the bell in the temple is made in Portugal.

To end the day we had the option of stay at any of the three places. We did not find Murid very interesting and moved on to the vilage at the end of the road called Karde.

Karde beach, surprises us. It has a large number of hotels and lodges and the beach is quite good with very little waste dumped on. 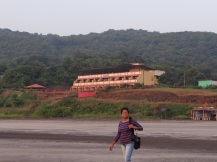 It has some rocky patches on which this moss grows.

The beach is a narrow strip between the ocean and the gren hills opposite. This situation creates a good birding opportunity. We could hear Peacocks at our hotel in addition to several other birds. On the beach side one can see a number of waders and a small group of Black Kites active in the morning.

At Karde one is alowed to ride scooter on the beach, at least for now. 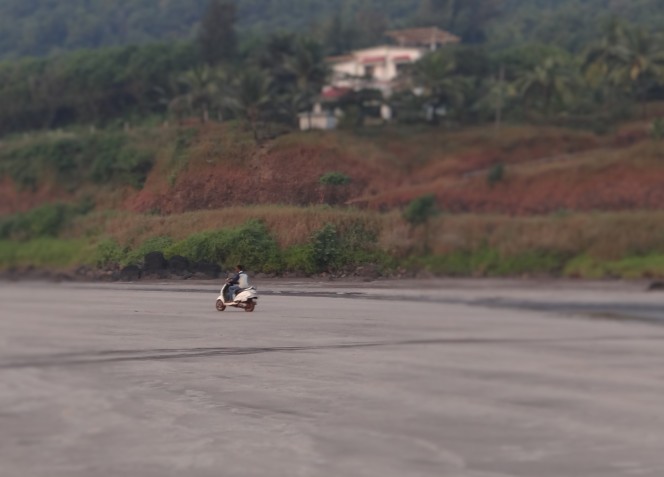