TheBlueDrive has been following the straight route north – south, geography permitting. The above two places are not physically connected but have a common theme. Karnala is a bird sanctuary and Phansad is a general kind of sanctuary, both under the Thane division of Maharashtra Forest department. Our stay at these locations was separated by a two-day stay elsewhere which will be covered in the next post. The places themselves are separated by a distance of say 80 -100 Kms  by road.

Karnala has dual importance. It has a history as capital of a region under the pre-Maratha Muslim rulers. It has a fort and is now a Bird sanctuary hosting close to 200 avian species. 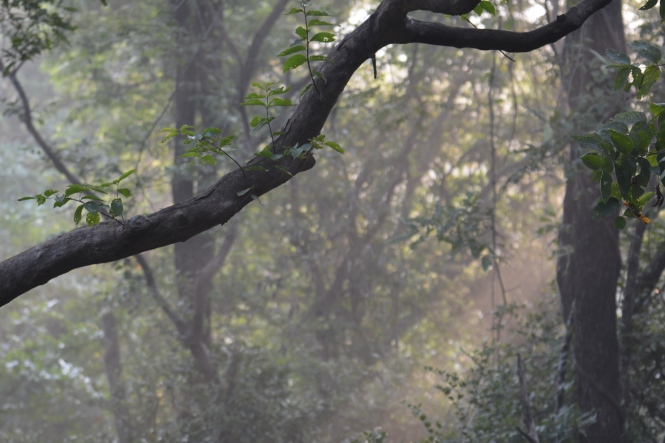 This is the proof that I am alive to some of my friends who have doubts about my continued existence on this planet. 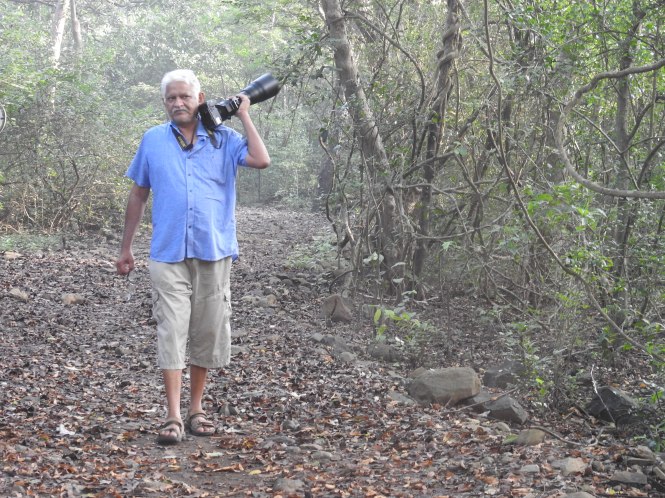 TheBlueDrive has been on bad luck as far as wildlife is concerned despite the fact that ‘nature’   was planned as the major theme of the travel. The reasons are various. The time of the year being the major one.

‘There have been late rains and the foliage is thick. You won’t be able to see many birds. Please come later in December’

No, we want to spend time here as this is a continuous travel programme. It is not possible to come and go up and down.’ OK, you can stay at the cottage’ inaugurated by Chief Minister of Maharashtra Mr. Vasantrao Naik long time back.

In the event, the advice about the birds given by the forest department guy turns out to be correct. The foliage is too thick to see or identify anything although Veena manages to capture a few species and I chip in with some. Allow me to skip the ornithological details. 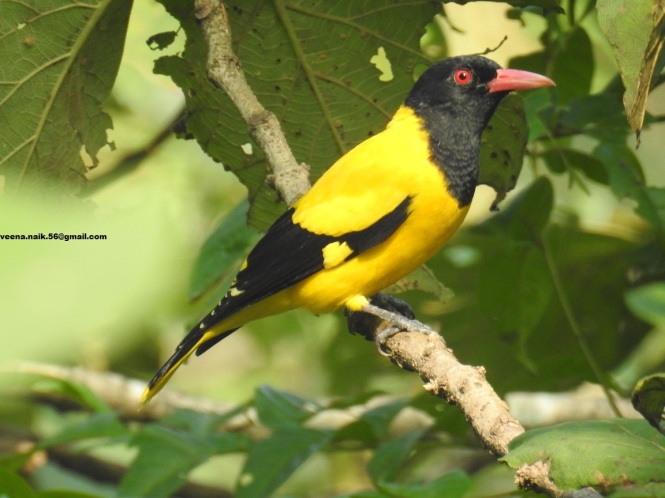 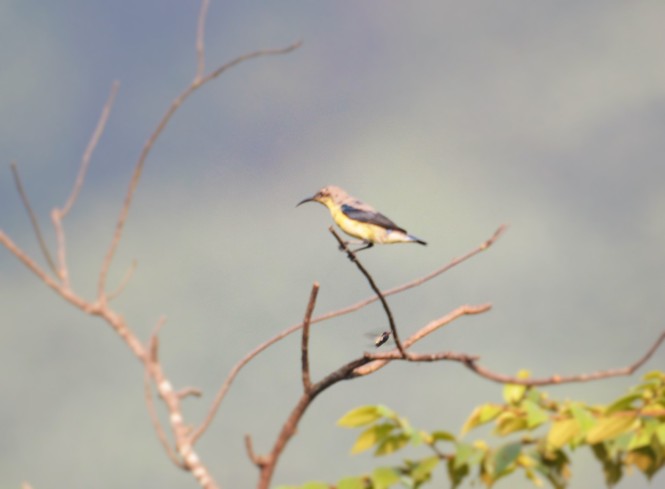 (a species of sunbird) 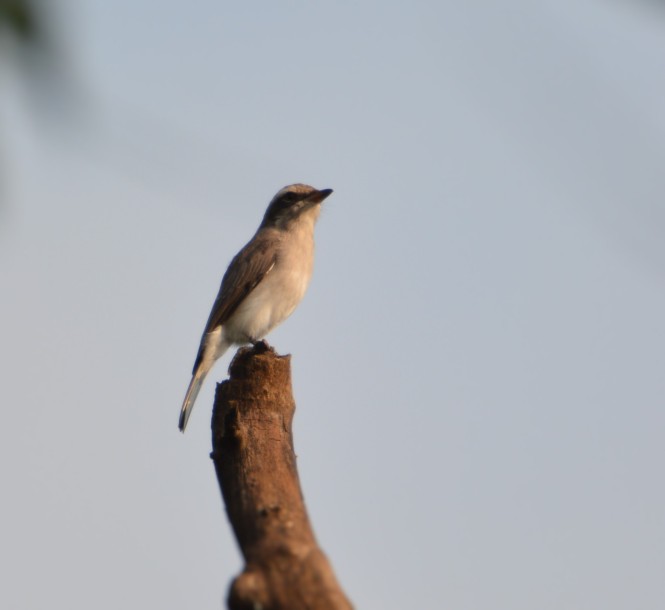 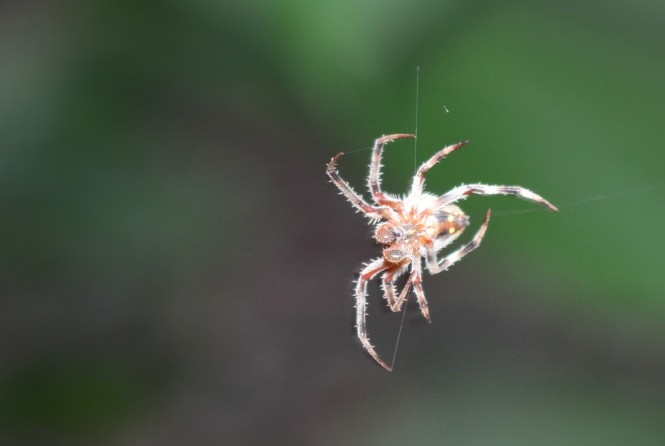 This one looks for food on the underside of the leaves. 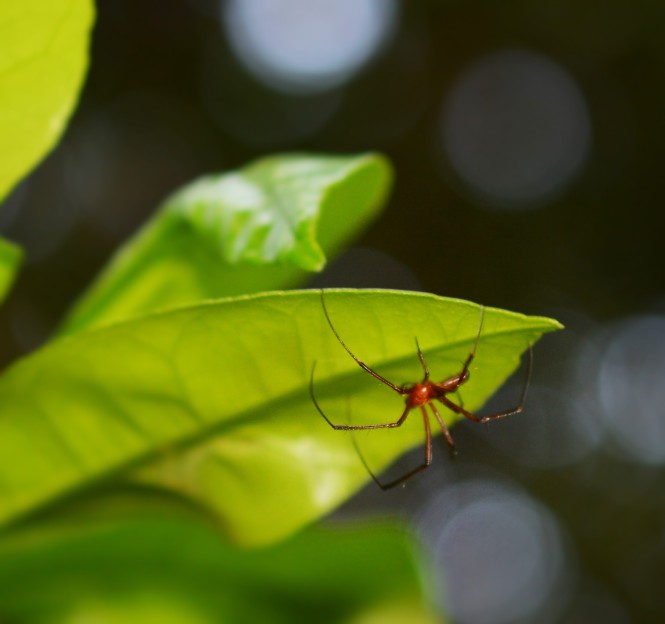 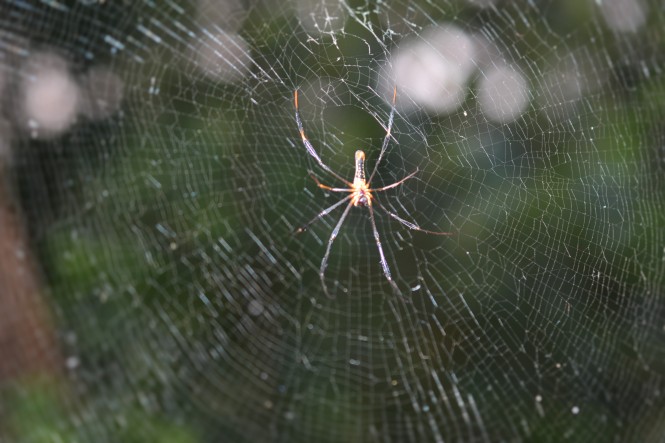 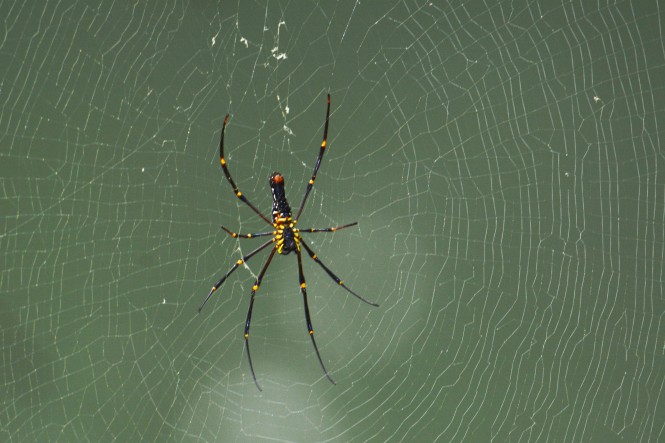 Veena found this one on the ground. 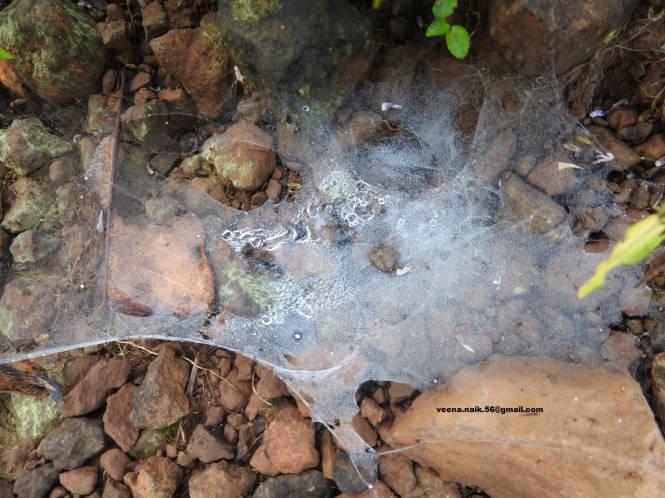 The park is close to the National Highway connecting Mumbai and Goa, a stretch of more than 600 Kms. through three costal districts of Maharashtra. One can hear the sounds of heavy vehicle passing on the road well inside the sanctuary which is spread on both sides of the road. This could be one of the reasons for paucity of birds on the lower reaches of the hilly sanctuary.

We decided not to climb the Fort as it would a bit difficult for us and then it is not exactly within the scope of TheBlueDrive adventure, being away from the sea. 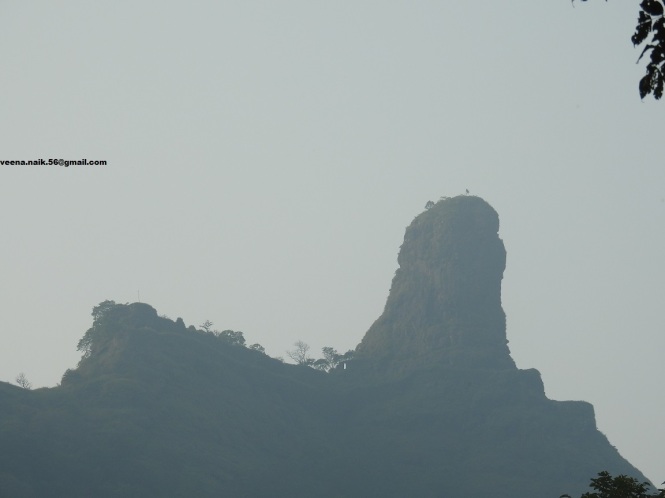 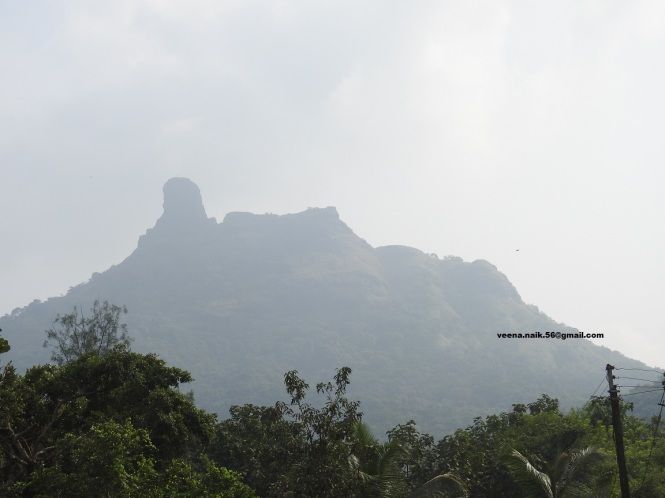 To the credit of the forest department, this place has been maintained well without any major incursion on the nature despite the presence of the Highway. The only regret is the caged birds. The ‘ Forest department’ knows better than to keep caged birds on the premises of a sanctuary including the imported lovebirds. I don’t want to post any pictures of caged birds. 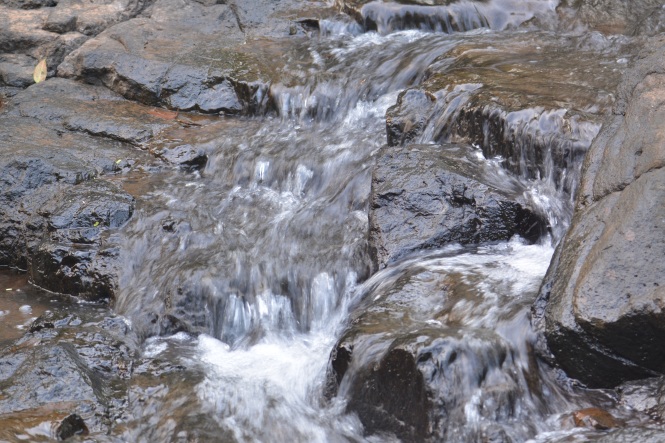 PHANSAD is a hidden gem. Recommended to us by an old friend Mr. Sudhir Joshi from Pune who is also a nature lover and a marvellous photographer.  One should look at the Google map and the green patch would be immediately noticed south of the Korlai fort.

This is an extensive green patch and a part of it is now the Phansad Wildlife Sanctuary.

The Rajas, Maharajas and the Nawabs of the princely India had their own ‘hunting reserves’, exclusive places for royal hunts where they killed a variety of wildlife assisted by armies of servants and trained ‘shikaris’. Phansad was the royal hunting reserve of the Nawab of Murud-Janjira. About this place you will hear more from me later on. Right now let me confine myself to the Sanctuary. It qualifies to be a part of the TheBlueDrive as it is less than 30 Kms as the crow flies. 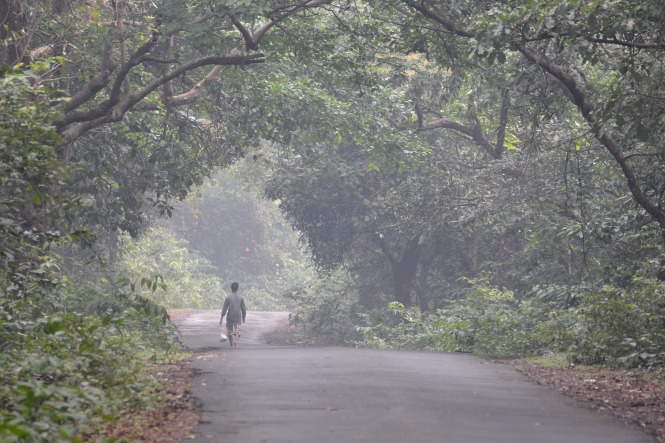 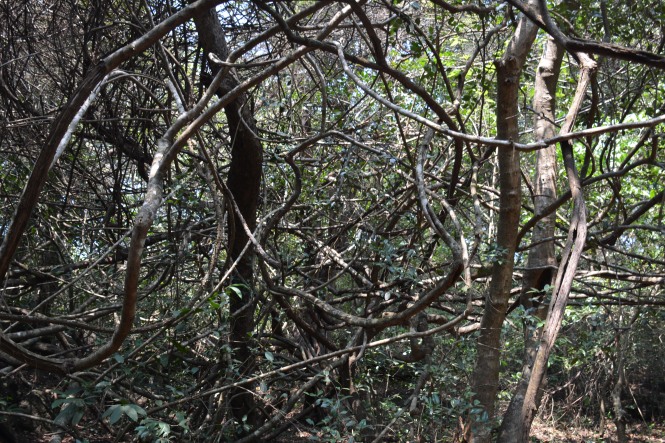 Sudhir sent a text message saying that this is the butterfly season at Phansad. I change the lens accordingly and off we go: 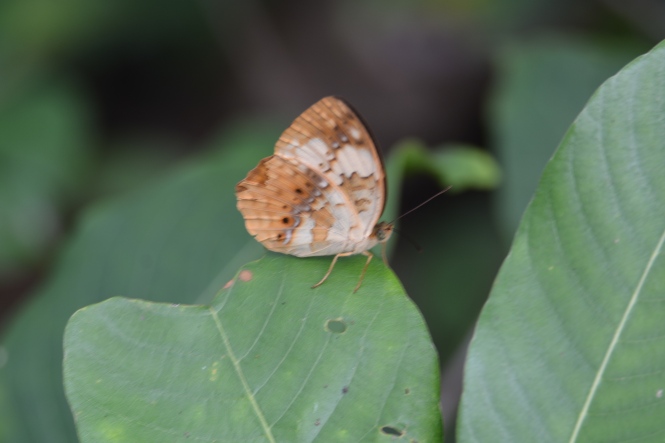 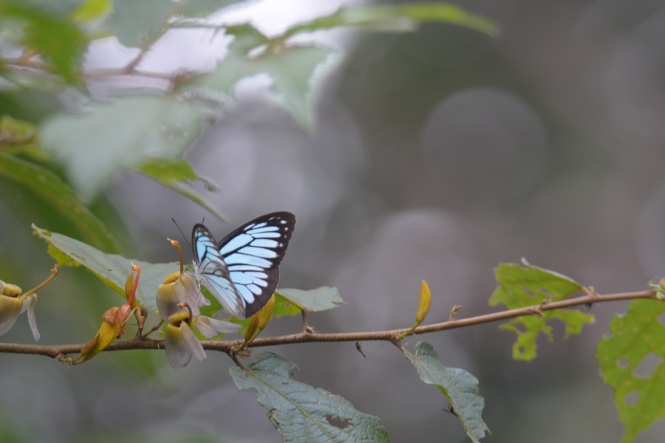 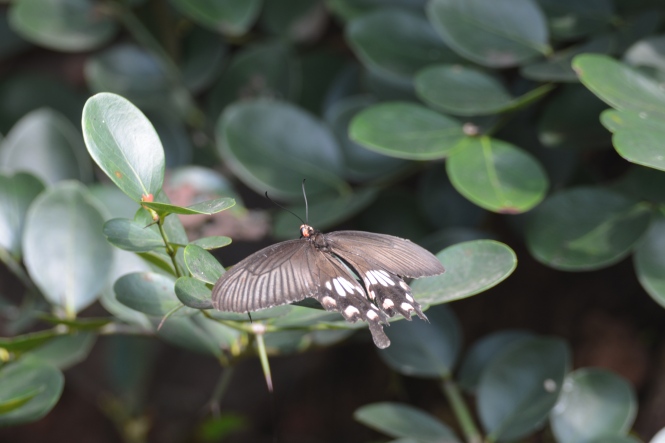 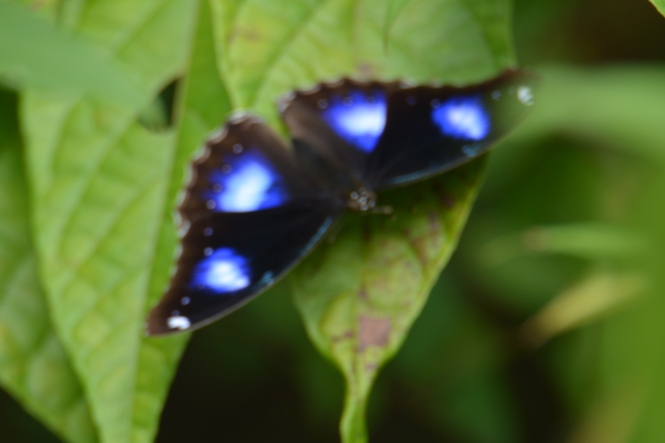 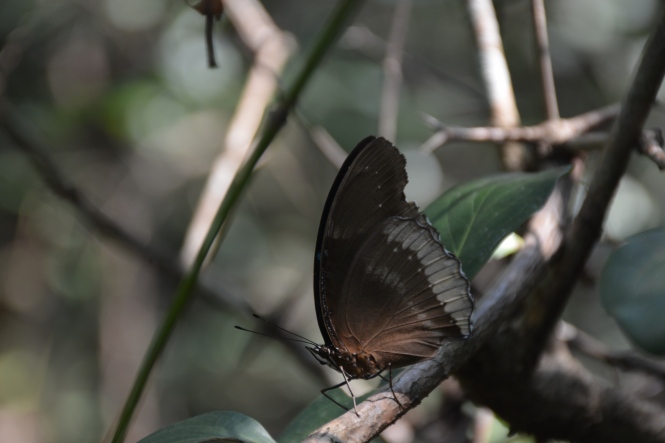 Birding was not very fruitful the culprit being the late rains and the overgrown foliage. However, we could manage to view a few but failedto photograph.

The forest has a number of fungi growing on dead wood. 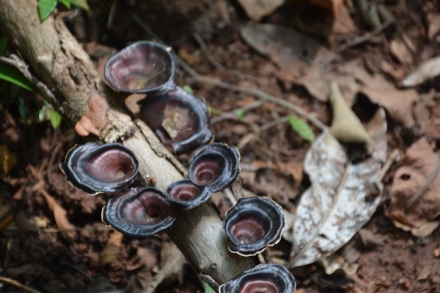 & this one on a living plant.

Phansad has a road passing right through it connecting the seaside villages to Roha town on the Highway. Supegaon village is the sanctuary headquarters and the only village within it. The Sanctuary has tented accommodation which was not yet ready foir use after the rains. There are two ‘Home Stay’ places authorized by the Tourism department. We stay the night in one of those in the village 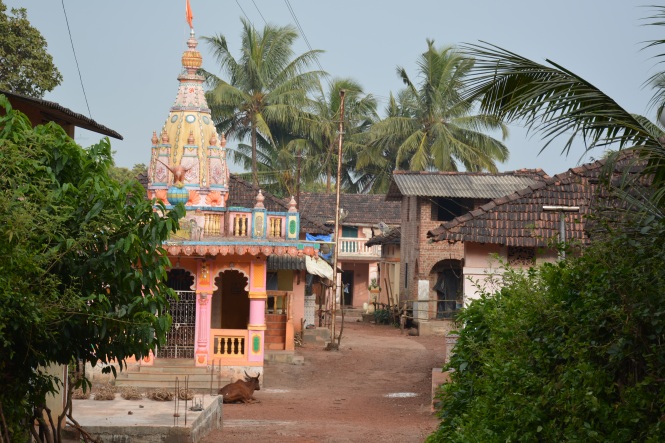 The villagers grow rice and are saddled with a serious problem of animals destroying their crop. By the day it is the monkeys and at night the wild boar. All the paddy fields have to be guarded around the clock. This requirement has produced this beautiful ‘machan’ architecture. 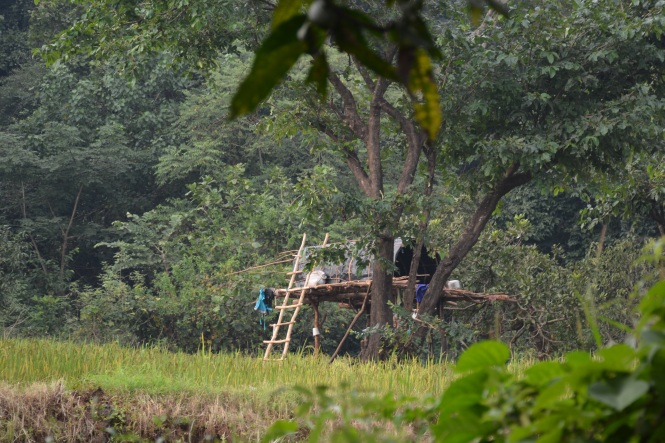 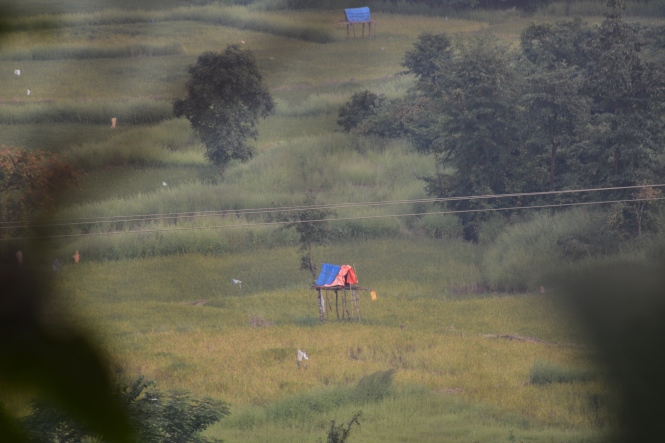 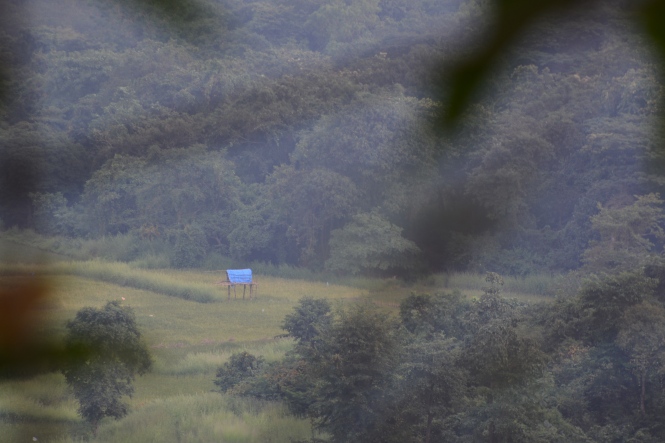