We had entered Somnath-Dwarka twin towns through Veraval but had decided to stay at Prabhas-Patan, closest to Lord Somnath. In the process we did not have a look at the beauty of Veraval. On our way out of Somnath-Veraval-Prabhas Patan confusion we decide to go through the town.

Veraval is a large port and from what one can see must have been a busy one in its heyday. Now it is a fishing harbor with some boat-building activity. It is hurting to see towns and port towns which we studied in our geography lessons some years back, like this one,  becoming ghost towns. 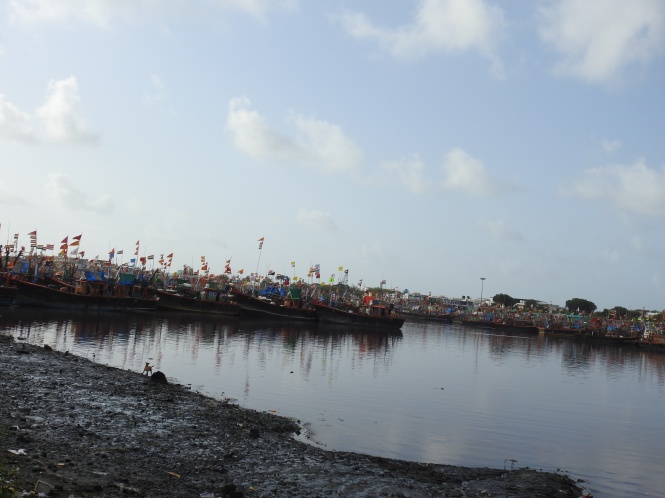 Veraval has a Horseshoe-shaped Lighthouse on the seashore located a bit far away from the port.

We move on in southerly direction with a view to make a night halt at Mul-Dwarka or Kodinar. On the way we come across a place which is shown on the Google map as Sutrapada Chowpaty. We drive in to face a cremation in progress. ‘Chowpaty’ here means cremation grounds. On the way back we see this Shani Temple. Now, let those people who claim that only Shani Temple in India is at Shani-Shinganapur in Maharashtra know that they have competition. 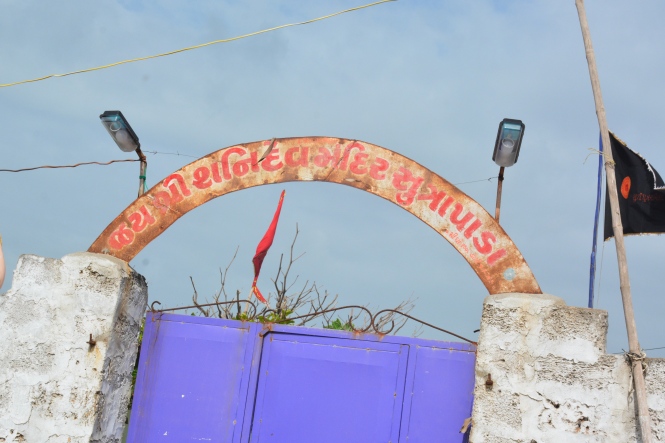 There is a coastal forest belt at Sutrapada. We waited for permission at the office till 10 am and nobody turned up. We decide to drive on instead of waiting for the Great Indian Bureaucracy to arrive. Dhamlej is the name of next place on the coast. This is an out and out a fishing village with a very small Lighthouse, the smallest we have seen so far. It is not functional.

It is Ganesh Chaturthi today and people are busy with the preparations for the festival.

On the fishermen’s jetty we see a mound of these seashells. We are told that they are not caught deliberately, they come with the fishes and are utterly useless.

It is a bit hot to-day. The sun has come up in full force. We have two more places to do before we rest for the day. We have Mul Dwarka coming up. Mul Dwarka is a huge confusion. There are at least three places in Gujarat coast that claim to be the ‘Mul’ the original Dwarka from where Lord Krishna moved to his current official residence. The one we are about to visit is one of those ‘Mul Dwarkas’.

The place is completely overshadowed by the huge cement plant owned by Ambuja Cement.

So much so, to reach the temple on the seashore one has to pass under the property  owned by the successors to Joseph-Auguste Pavin de Lafarge, the French businessman. Lord Krishna would definitely have refused to pass under this material handling plant.

The temple(s) are not spectacular, ordinary temples that you find in villages all over India.

The people are keen to be photographed.

The really interesting thing about the place is a small wetland directly opposite the cement plant which is hosting several species of birds. We could count nearly a dozen late morning.

Here is a Pheasant Tailed Jacana.

Between Mul Dwarka and Kodinar we stop to photograph this beautiful shrine of Shia Muslims known as karbala. 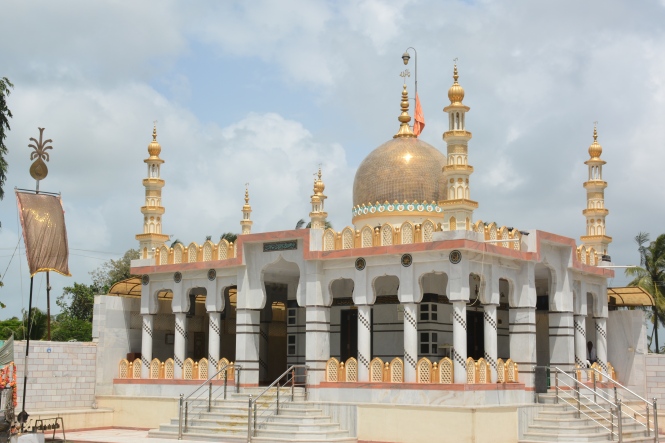 We move on with the intention of putting up for the night at Kodinar. On arrival we see that this place has nothing to offer for visitors and is also a bit far off from the sea. And then Diu is only 40 Kms. away. Driving 40 Kms. away from the oppressive policies of Gujarat government is not a big deal after being thirsty for 24 days.