We start the day at Hindorma near Rajula, district Amreli. Within a short distance we come across a signpost showing Pipavav and a temple. This is the original village VAV , a step well after which the village and now a major port is named. 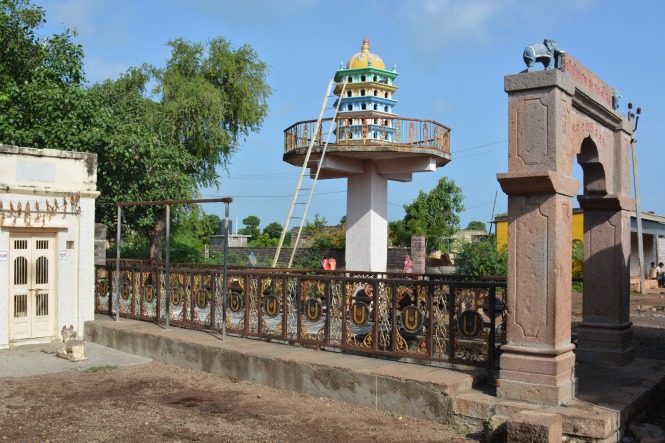 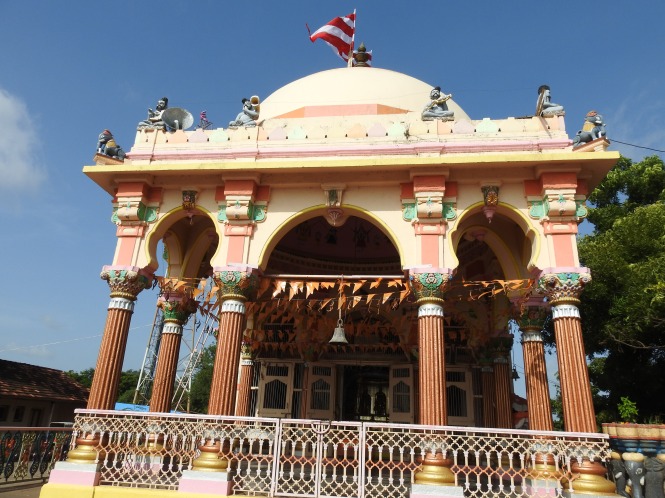 and the peacocks in abundance. This one is making a pass at the cow. 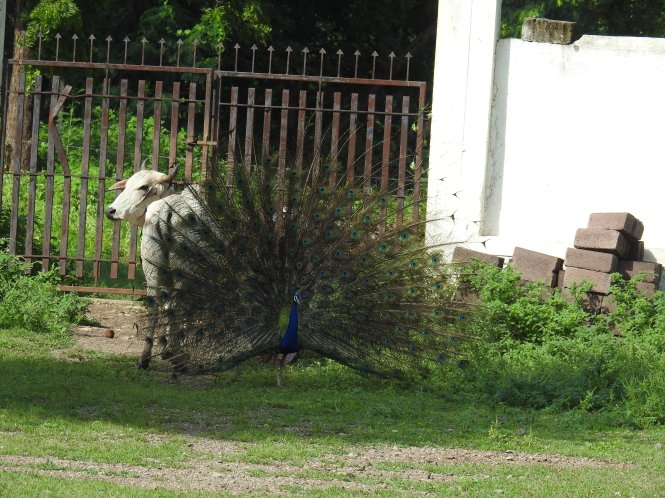 As we drive towards Bhavnagar ( not knowing where we will close the day), we come across a huge signage showing directions to Victor Bandar or Port Victor, an unusual name for a place in Kathiawad. As suspected it turns out that this place is named after an Englishman. We could not find the full story. We drive on 1.5 Kms of cement road and then through 2.5 Kms of field of ditches knee deep to be told that the port is dysfunctional or nearly so. There is a small signpost and entry is not restricted. An old office block indicates that there was some economic activity here in the distant past. 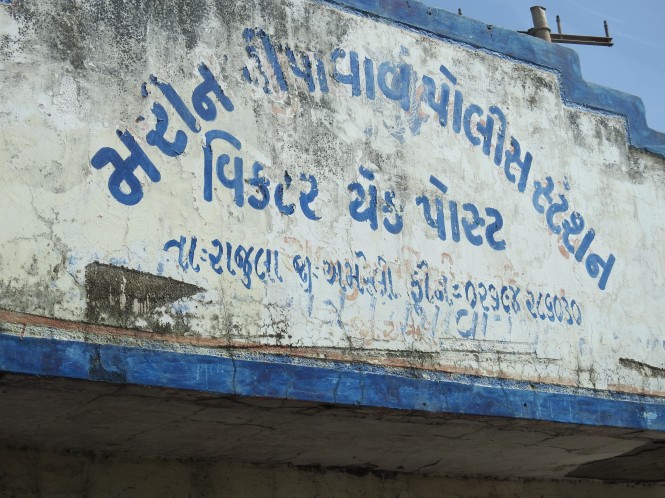 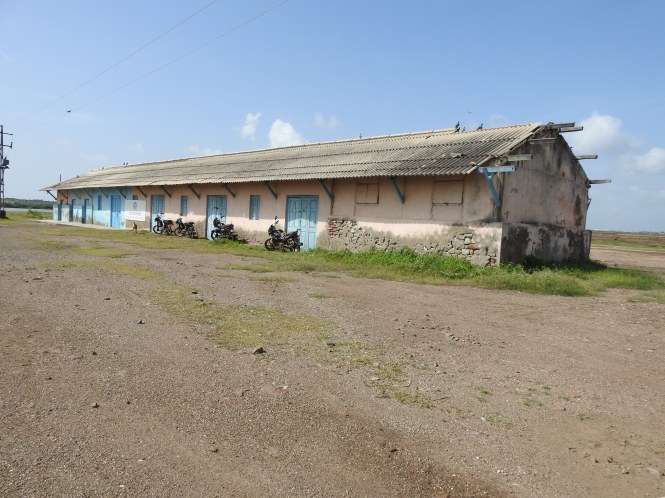 This place is on a creek, not on the seashore. What attracts our attention is an oldish looking structure well beyond the other side of the water. The creek can be crossed by a boat which can take a motorcycle, not a car. But then this structure is very attractive, it is on the seashore and must be seen. Our research before starting had not revealed any such thing. At least it is not in my notes. Google map also fails to reveal anything. We make inquiries with the people at the crossing. Yes. It is a palace and the place is called Chanch and is also a port or used to be a port for transporting salt in good old days. How do we go there? ‘Go back to the main, drive towards Bhavnagar about 20 kms, take a right turn and drive another 16 Kms’. In the event, this drive revealed something which you do not find on the internet, at least we did not. An 84 room palace of the Maharajas of Bhavnagar, built in 1945. Not in a very good shape internally but cannot be called dilapidated. It has excellent view of the sea but does not have a beach. It is on a cliff and overlooks the Arabian sea. We are told that it has been sold to be developed as a Heritage hotel. 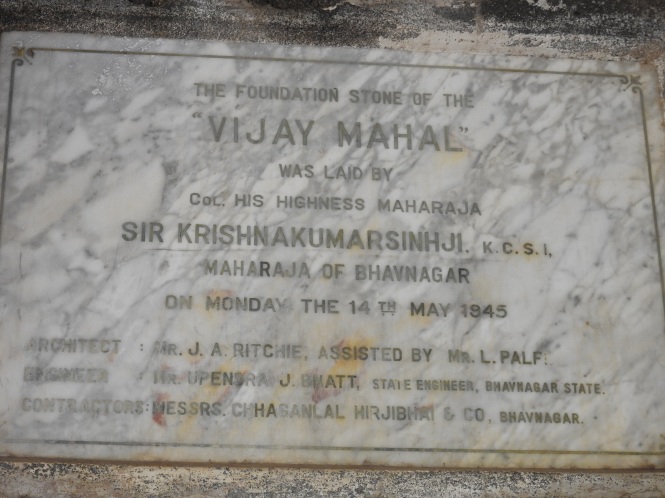 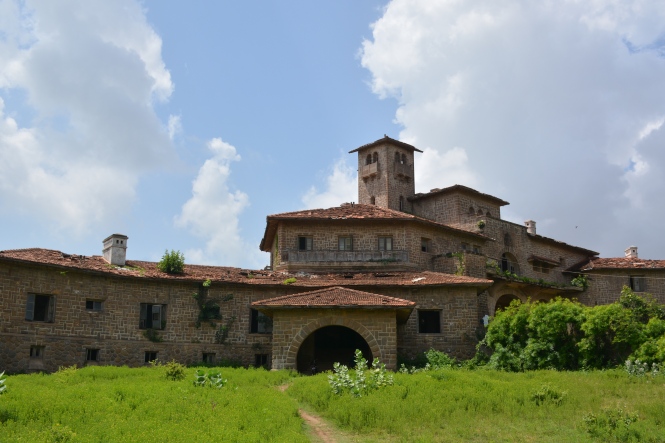 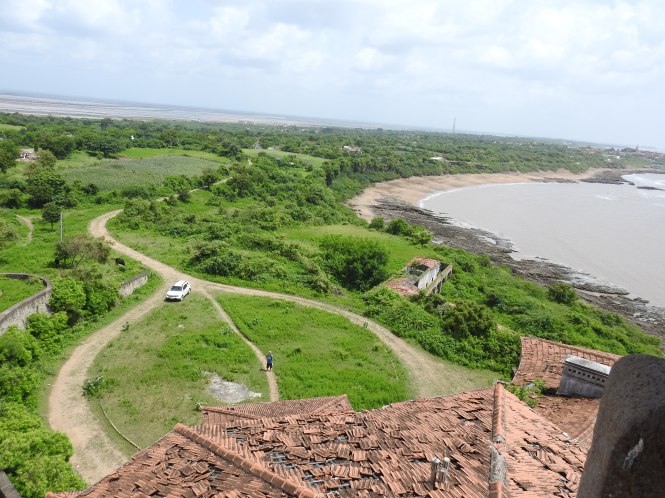 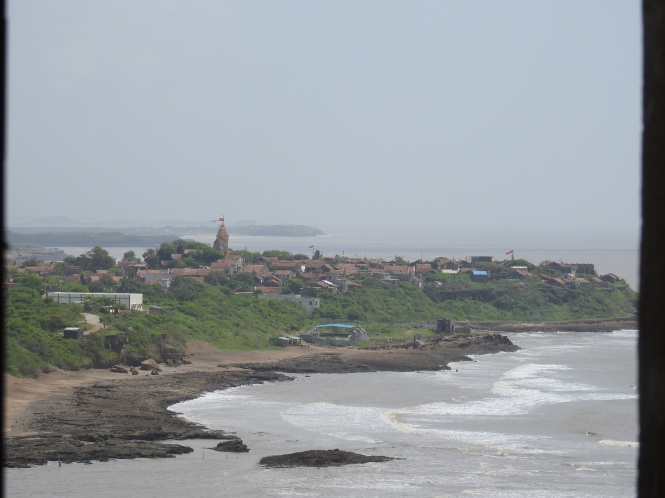 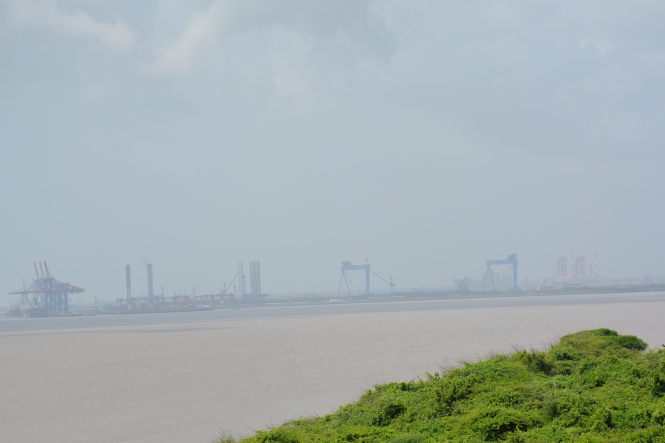 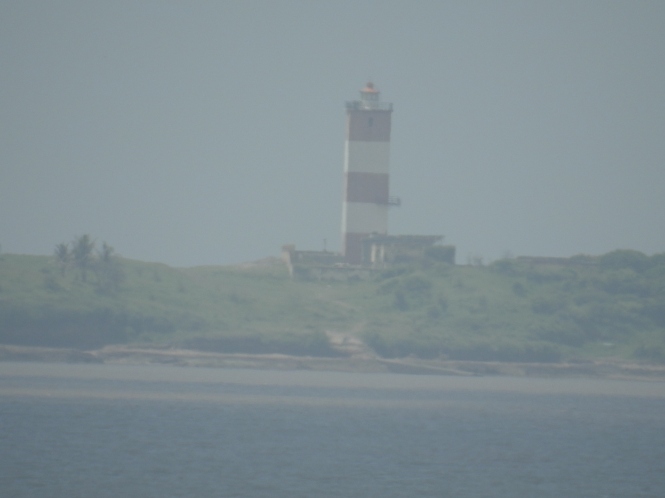 We come back to state highway and drive towards Bhavnagar. At around lunchtime we come across Mahuva town. We decide to look around the town and spend the night here as accommodation is available, Mahuva does not have much to write home about but the outskirts towards the west have some beautiful places.

Bhavani Mandir on a cliff on Bhavani Beach is worth visiting. 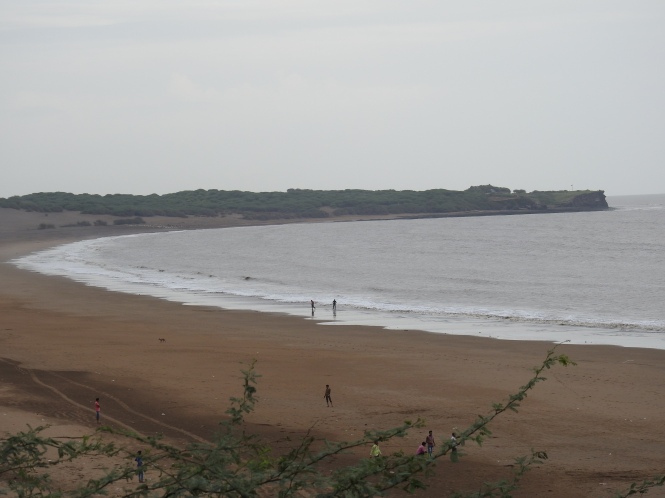 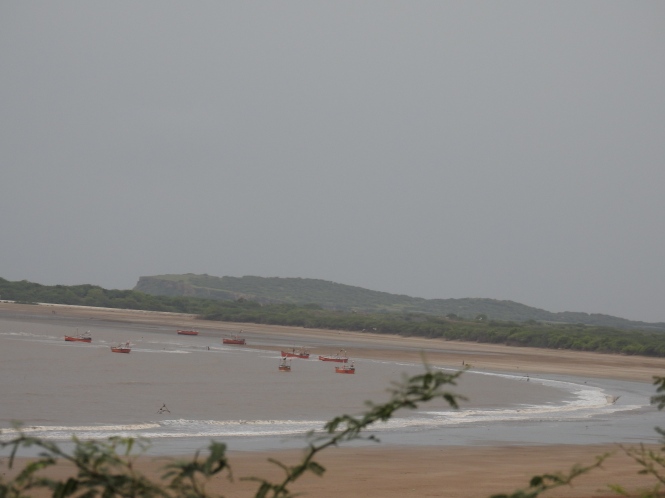 Childless couples make an offering of these little wooden cradles to the Goddess for the desired result. 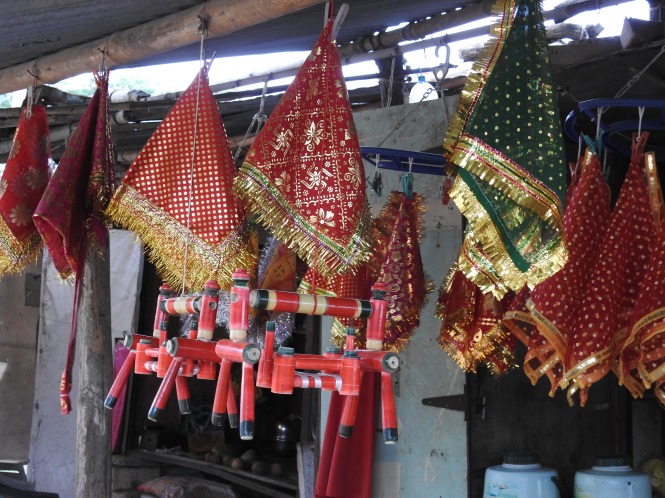 This lighthouse called Jegari on the hill opposite the temple take us some time to reach as we have to return to the town  and drive again in the same direction but from another place. The Lighthouse surprised us by saying that we are welcome and we bought the visit tickets, camera tickets etc. The next moment they tell us that we cannot go up as the lights have already come on and the regulations do not allow us to climb up at this time. We have to come back tomorrow evening at 4 pm. This information is revealed only after we buy the tickets for Rs. 90/- 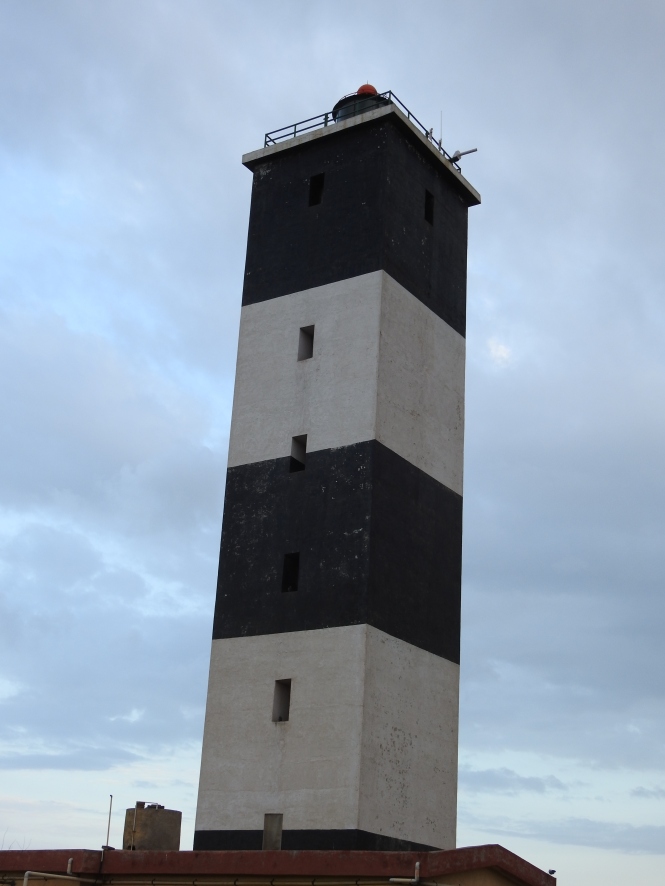 The port of Mahuva is a minor port and it has silted and used only for fishing boats. 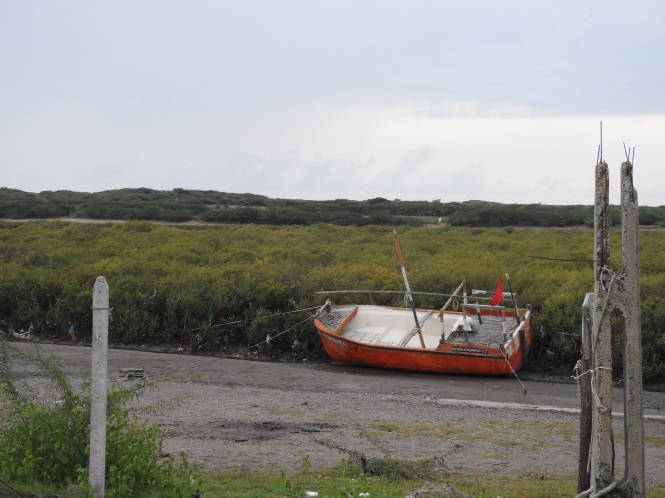 The next day (Saturday, 10th Sept.) we leave Mahuva to see Unch Kotada, a town by seaside famous for a temple complex and a beach. We drive on the smaller village roads nearer to the seashore instead of taking the better roads connecting cities. 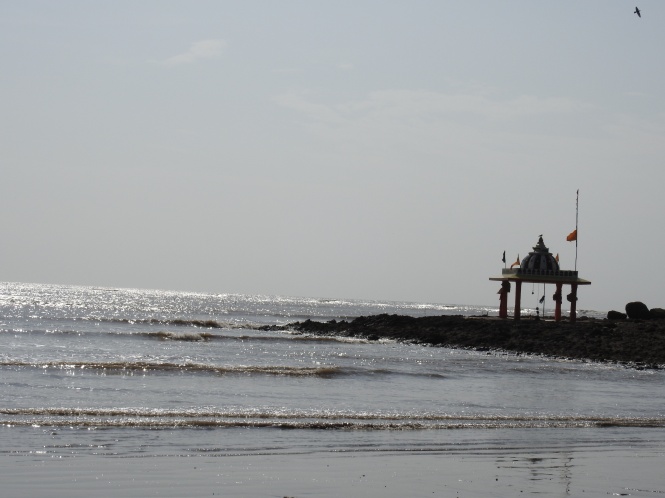 Practically every village which has a seaside has it’s own temple, especially if it has a hill or hillock. The main temple is on Unch Kothada a hill but one can drive up there. One cannot see the sea clearly from there as a wall surrounds the place. 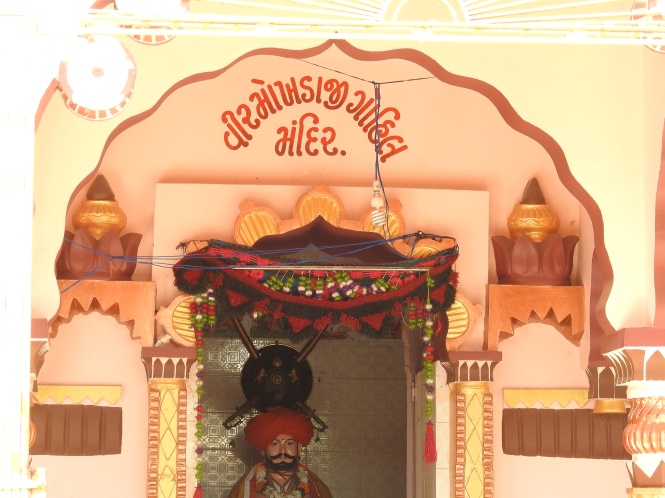 Our next station is Gopnath. On the way we find this step well (Vav) at Vejodari. The Vav is an important institution in this part of the world often accompanied by a temple. The Vavs have been kept alive even at those places that have piped water. 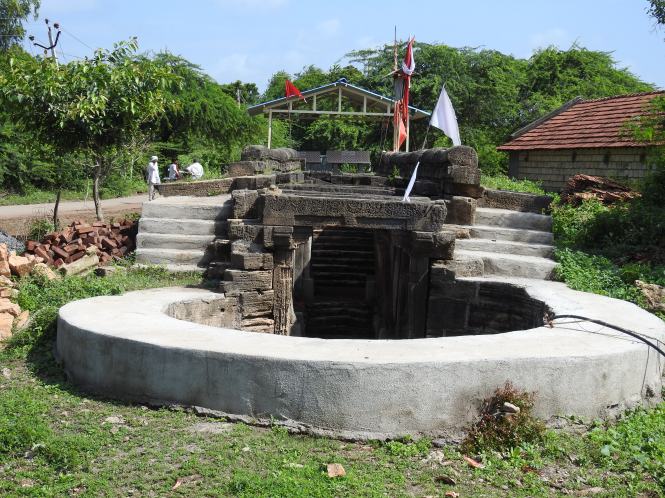 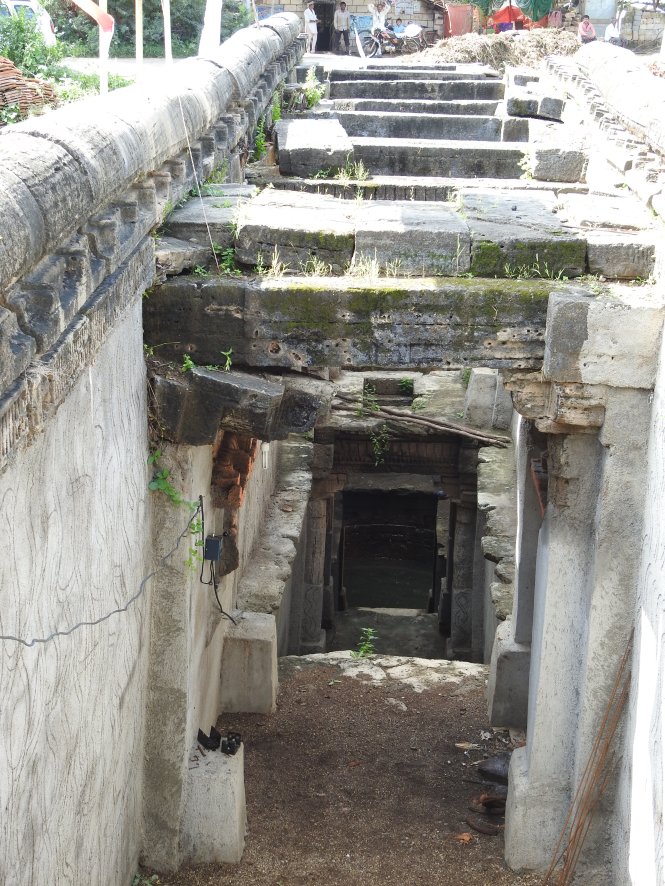 Gopnath or Gopnath Mahadev is known for it’s temple (s) and the sea shore. 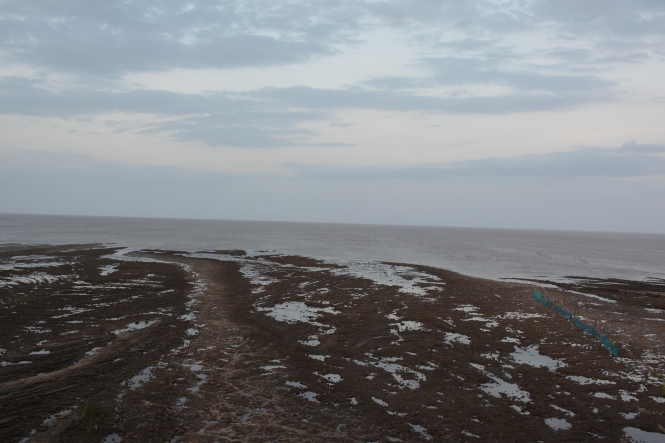 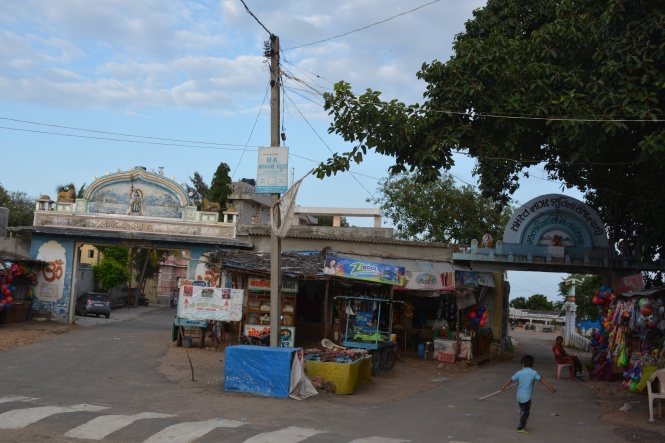 It also has a Lighthouse. In fact this place had a lighthouse during the reign of the Maharajas. The remnants of the old one can still be seen. 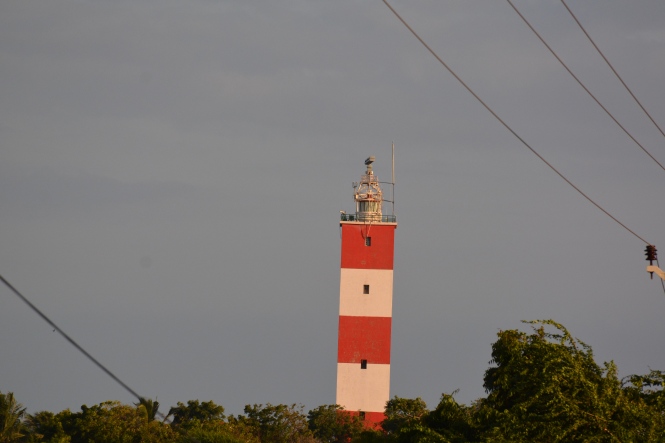 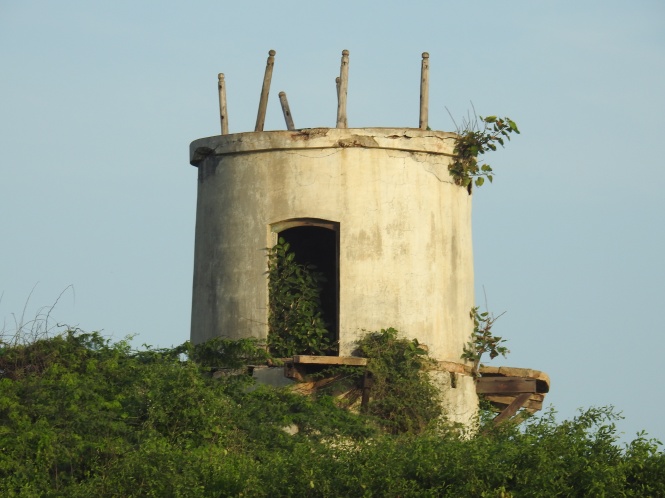 The ‘Floating Stones; is a major attraction in the temple complex. 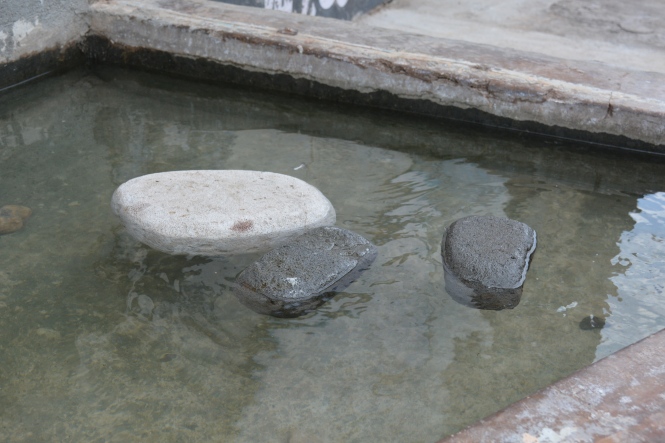 The interesting part of Gopanath is that it has hotel accommodation. An old property overlooking the see belonging to the Maharaja of Bhavnagar has been converted into a hotel.  We decide to spend the night here to have a feel of how the royalty spent it’s time or rather where they spent their spare time. The manager of the hotel  Mr. Ajay Singh treats us well. 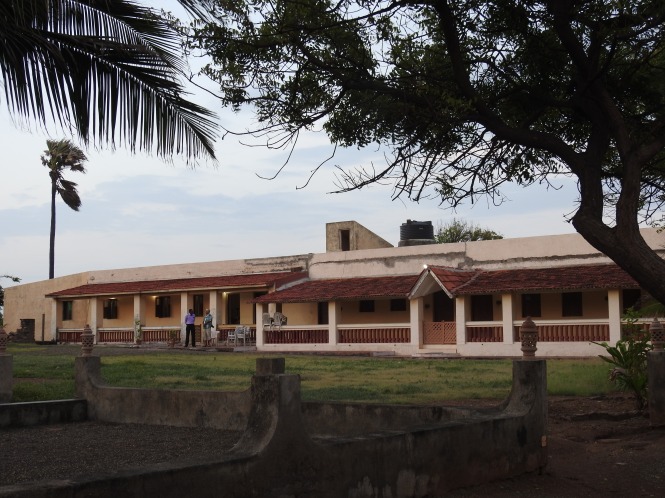