Yanam to Kakinada is a short distance but we have booked a room at the Haritha Beach Resort owned and operated by the AP Tourism Development Corporation which is located by the sea at the northernmost corner of the town or perhaps outside the town as the place is called Vakalpudi. As we are travelling from the southern side we cross the almost the entire town to reach the place. 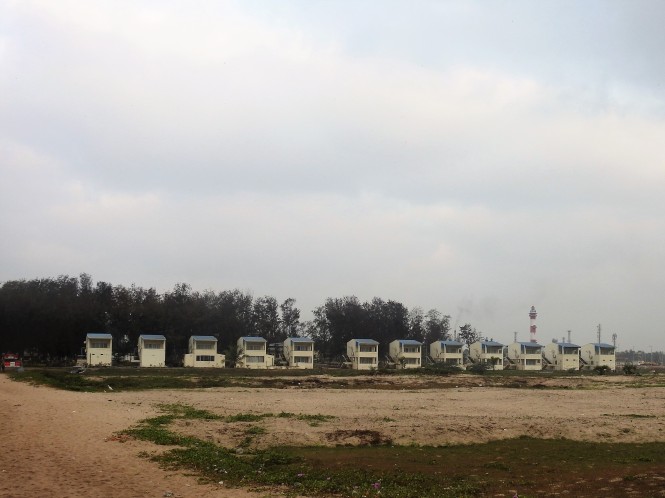 In the vicinity of the resort is the Lighthouse. It is known as Vakalpudi Lighthouse. We are allowed to climb the stairs up but decline as we are a bit tired after the long drive in the morning. 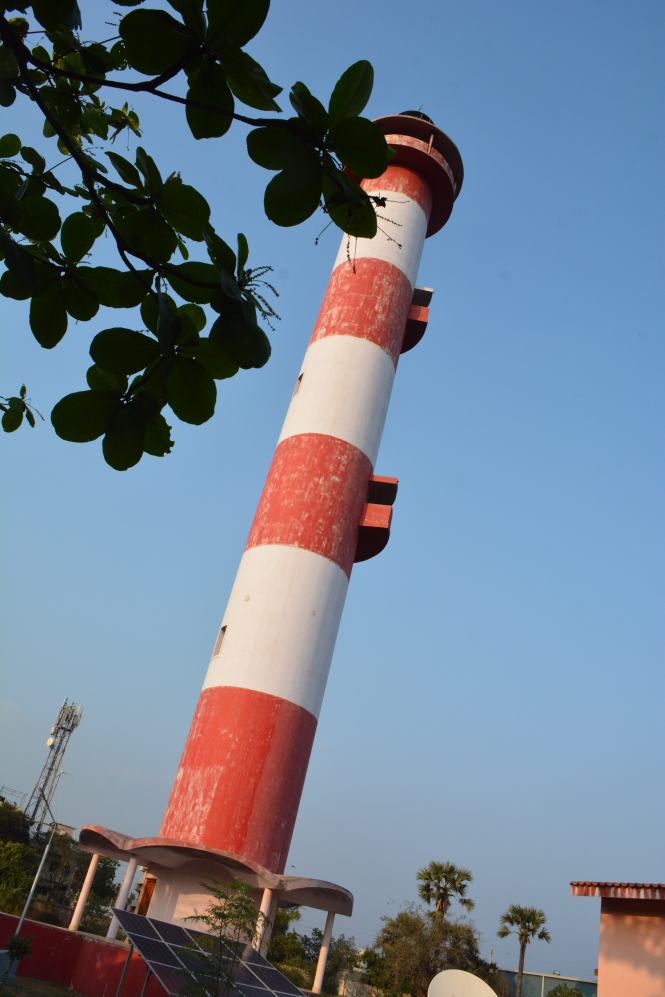 Apart from being a seaport, Kakinada is also a major fishing harbour. Right in the centre of the town one can see a large number of fishing boats anchored in the creek which cuts across the town.

Kakinada also has a sizable fishing boat making industry. The location is right in the centre of the town along the creek. One can watch the various operations related to making wooden boats. 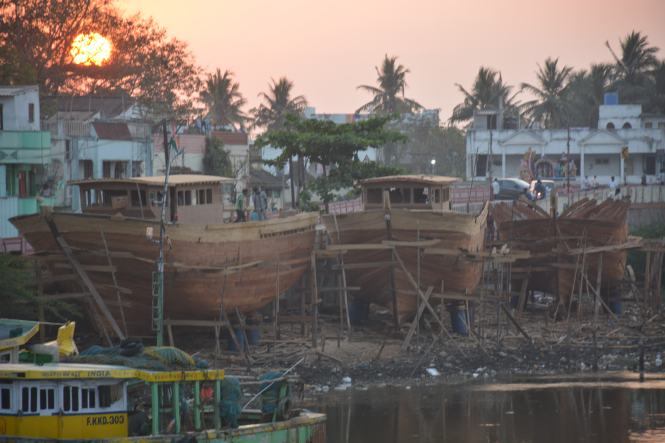 It is a busy little place with boats at various stages of completion. 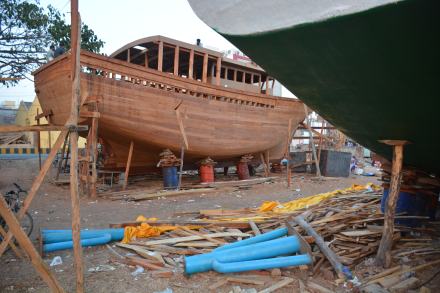 This one is almost complete and getting painted.

There is a temple in the midst of the shipbuilding area. A small temple probably with the specific function of blessing the boats under construction.

When you are visiting the boat building yard, you can’t fail to see the little market for dry fish in the vicinity. The eastern seaboard of India appears to be fond of dry fish much more than the inhabitants of the western part of the country. One can see dry fish sold in most of the coastal places. 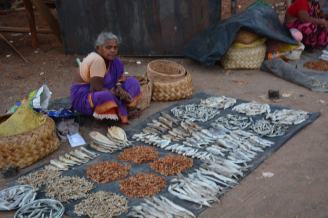 Probably the only recreational place Kakinada offers to the visitors is the Hope Island. This island has formed during the last two hundred years (200) and is a tadpole shaped. The 16 Kms long island is more of a sandbar with vegetation. The slim southern end extends up to the Coringa wildlife sanctuary near Yanam. It is said that this island is responsible to make the  Kakinada port the safest harbour on the east coast of India.

AP Tourism provides boat facility to travel from the Fishing Harbour to the island and back.

The boat ride is a return trip with a very short stay at the island. The island by itself offers nothing. It is barren except for a lighthouse which you notice as you approach the island.

The ride between the harbour and the island takes you through a busy shipping lane. 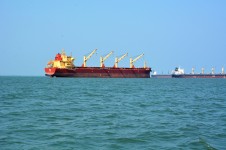 One can even watch midstream loading of ocean-going vessels. 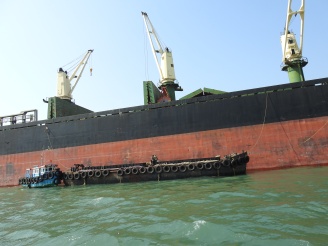 People visiting the island in the boat seem to be doing so for the pleasure of the ride rather than actually doing something on the island. In our boat is a large family and as we approach the island we realize that they have come as a group to celebrate the first birthday of this little boy. We join the festivities and act as the unofficial photographers. 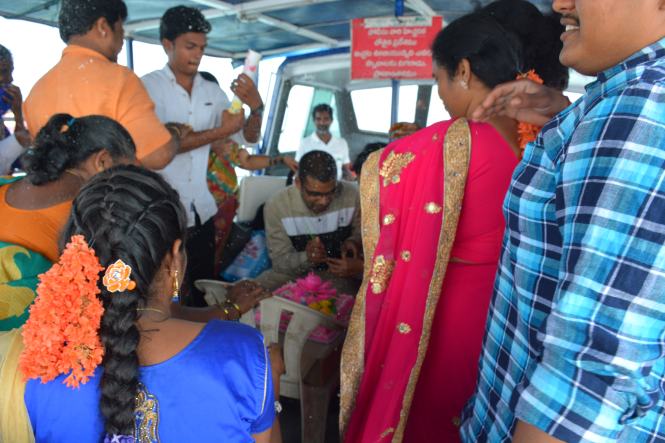 Hope island is rich in seashells. We pick up several of them for our collection.

The island seems to have a population of pretty squirrels. This one is nibbling at a coconut washed ashore, perhaps from the offerings made to some God.

KADIYAPULANKA is not exactly a coastal place but we decide to visit it for its famous nurseries and flower market. Located near Rajahmundry along one of the Godavari’s many water canals the place is worth visiting. From Kakinada one drives westwards through the green countryside and the maze of canals which support year-long agricultural and horticultural activities in the region. 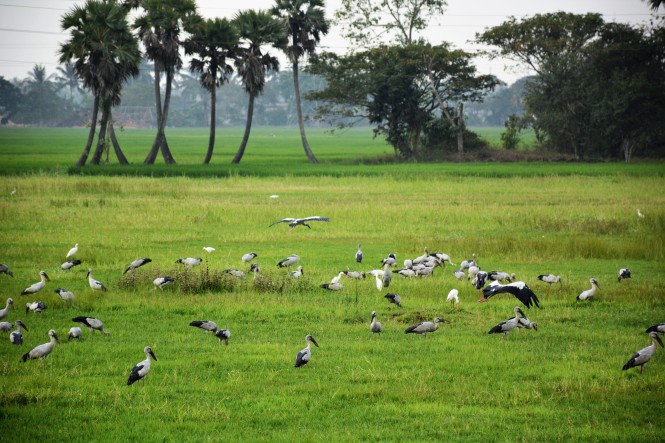 A large gathering of Openbilled Storks

The entire place is awash with plant nurseries. Countless. And they seem to be growing all kinds saplings, jut name what you want.

The main road divides the flower market into the Wholesale and the Retail parts. The Wholesale market building is under construction and is custom-designed for the products traded here. 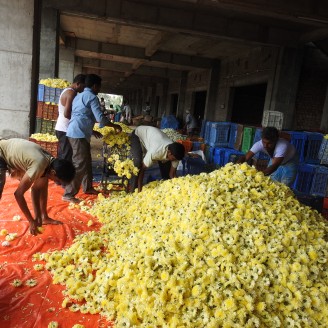 We are a bit late for the early morning auctions but still can see the huge quantity of flowers traded, and the vast variety. 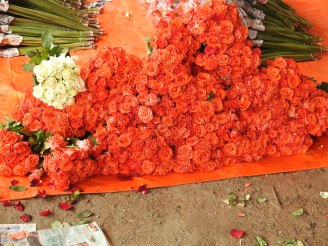 The smaller retail market is all the more interesting. It is here that one can see the garland-making and value-addition to the flowers sold on the opposite side, around a small temple.

Temple in the flower market. 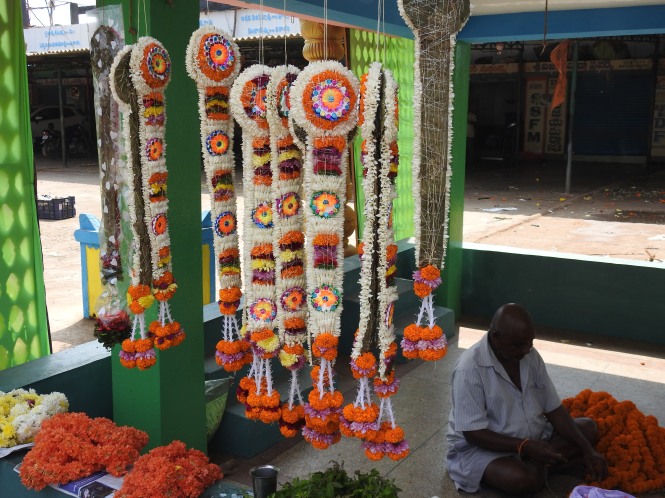 The giant garland, made to order. for a temple. 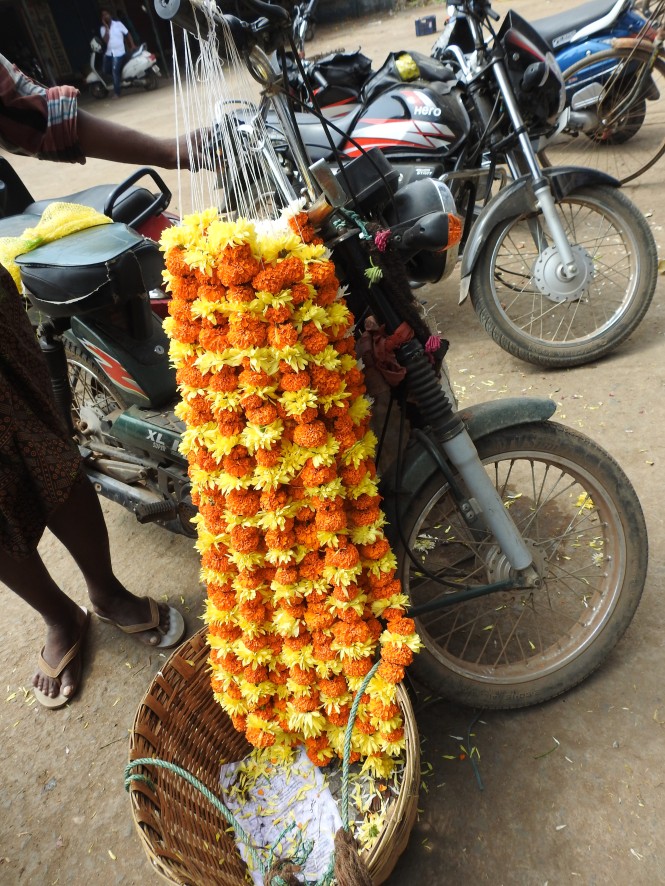 On the roadside near the retail flower market, this man sells home-made sweets unique to this region. 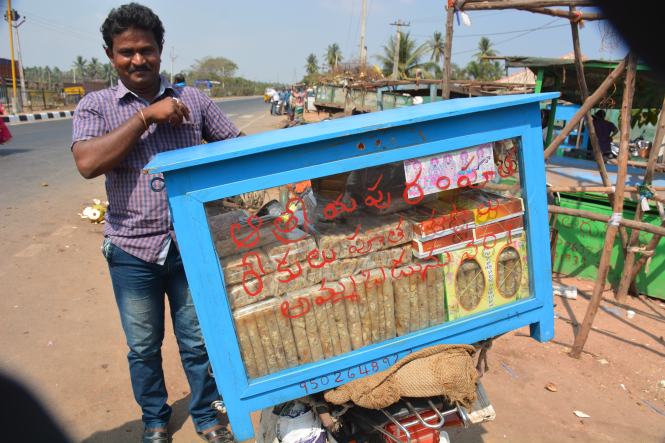 The sugar and other ingredients are wrapped in a thin sheet of what looks like a paper but is in fact a film made with starch gleaned from the water in which rice is boiled. It is called Pootharekulu. 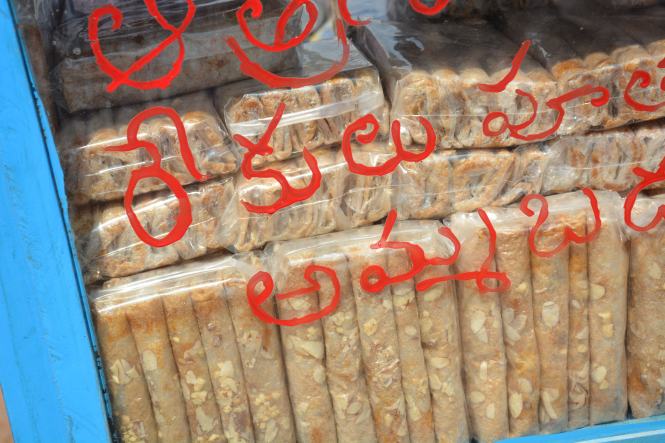 To wind up this post here is a brief video of how they make Rs 5000/- per piece garland.