In the last post, we passed by the lake and proceeded briefly to Kollam for the sake of convenience of the narrative. The Ashtamudi Lake deserves its own Post. So, we are back here. Ashtamudi Kayal is what they call it in Malayalam.

A bit of geography and history would be in order here although this Blog does claim to be a technical one.

River Kallada and a few other smaller rivers discharge the waters they bring from the Western Ghats into a lowland area abutting the Laccadives (Or Lakshadweep now) sea which is a part of the Arabian Sea. The lowlands form a very complex ecosystem of lagoons, channels, backwaters, islands and creeks. This system is generally known to us as ‘Kerala Backwaters’ which with their more complex resorts and spas and Ayurvedic Massages establishments are a major business. Most people don’t realize the immense historical, social, political and economic significance of this system. This lake with its elder (and larger) sister called Vambanad up north form an amazing ecological universe. The beauty of this whole system is that it is navigable for over three districts. It has a length of 241 Kilometres with 41 rivers, small and big, discharging the waters they bring from the upland western Ghats to make it a mixture of saltwater and freshwater which has produced a few hundred Ph Ds in Marine Biology.

Our brief in this post is the smaller portion of the  system called the Ashtamudi Lake which terminates at Kollam in the south. Before me, among the important people who came here was Ibn Batuta the Moroccan traveller in the 14th century. Between  Ibn Batuta and myself, there was a remarkable Englishman who came here at the behest of East India Company of London.

Col John Monro came here as the EAC’s ‘Resident’ after the local kings played into the hands of the White Man and surrendered their sovereignty. This Scotsman is widely revered in the region. He worked on the lake, reclaimed some lands as island which are named after him- Munro Island. Among other things that Munro did wad to dig a narrow channel on a part of the land so that it could be in communication with another part. The eastern part that you see in the map below is the place through which the National Waterways No 3 passes and connects to the northern part of the system. The encircled area is the one that connects the Munro Island area to the eastern side of the lake.

It is on the bank of this narrow channel that we stay the night at the place called Roomi’s Nest. Roomi’s Nest has rooms on both sides of the channel. If you want to go from one to the other, you go up along the narrow path lining the channel, cross the bridge and come down again. Very complex for a hotel. 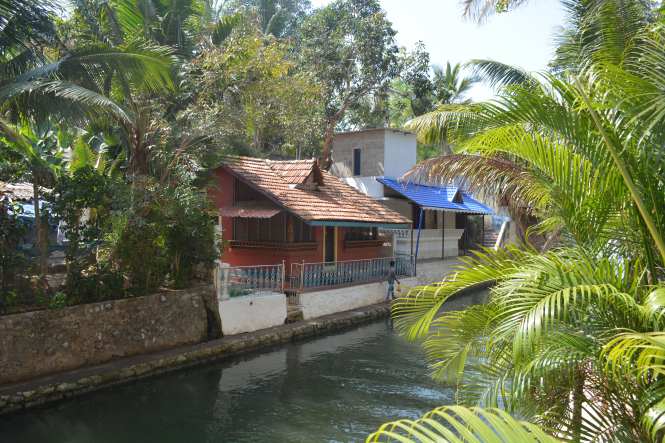 The difficulties and smallness of the place is compensated for by the very co-operative nature of Roomi and delicious food cooked by his wife.

Now what do you have in the lake? Many things if you have the time and the inclination. Unfortunately for us there is a feast going on that day at the Church and most of the resident fishermen of the area being Christians have excused themselves, leaving us with very little fresh fish. We were counting on three species of clams and one of oysters. We could not get any of the famous clams. 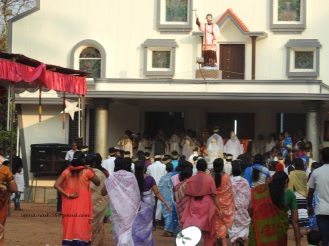 We start the morning on the boat owned by Roomi. He joins us with his crew of two and there we go exploring. It requires a license for the skipper of the boat to operate it on the lake. It applies to all motorized boats. 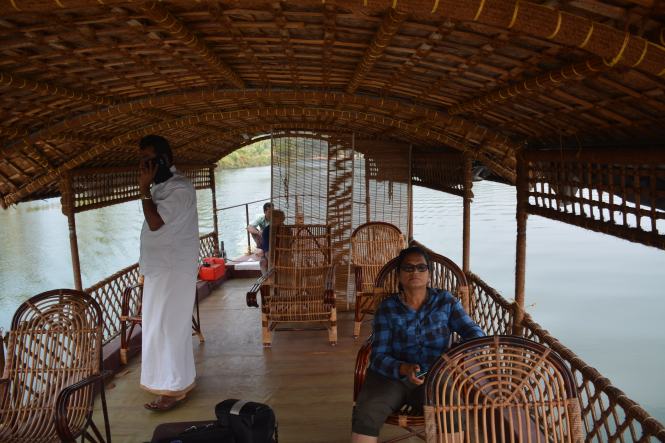 The houses on the shores of the lakes are colourful. It should be fun to live so close to the water although it may have its own difficulties , like the mosquitoes, the falling coconuts etc.

The Chinese Fishing Nets are here on the western side of the Munro Island, but not many. 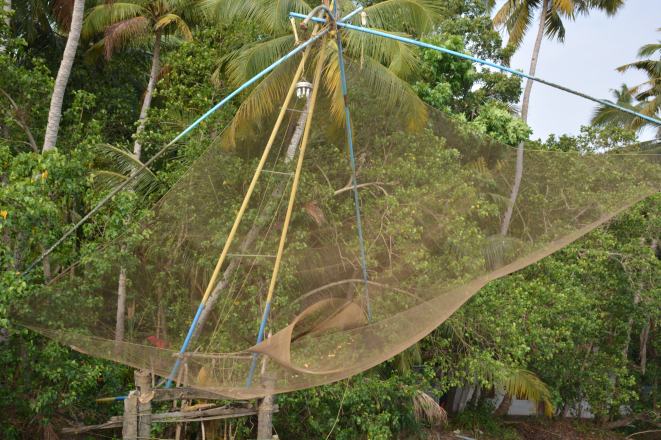 Among the economic activities one can observe on the islands is Goat-rearing. 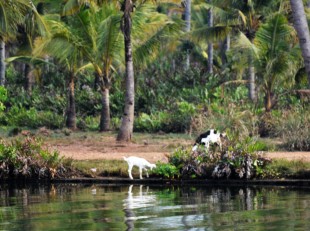 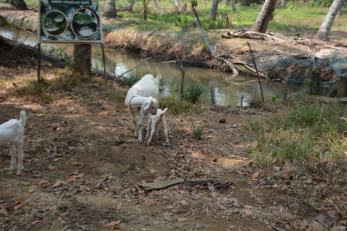 Cows are seen but not many.This cow seems to be enjoying herself. 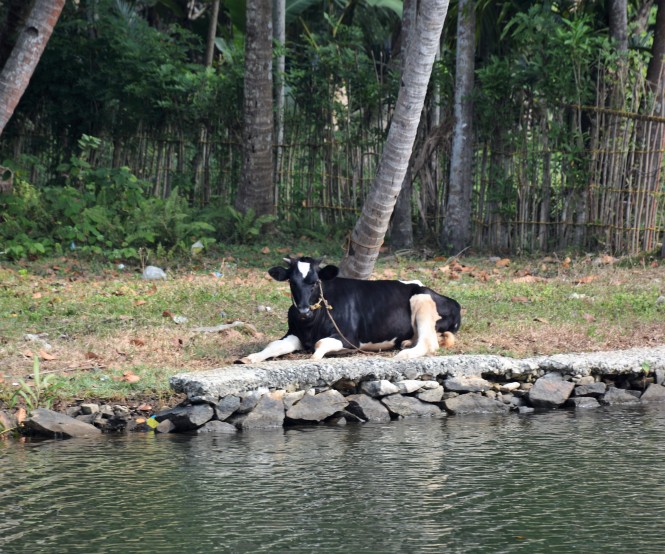 There is a weed which grows along the shores of the lake and I was told is liked by the cows. 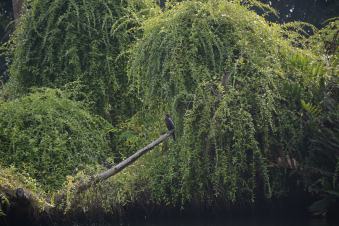 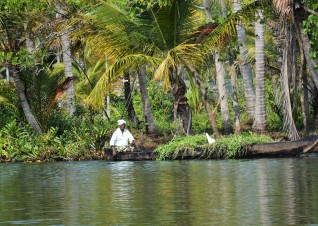 Rearing ducks appear to be an activity quite common all over Kerala and Ashtamudi lake is not an exception. It is quite interesting to see roadside shops in the state selling three types of eggs- the common hen eggs, larger Duck eggs and the smaller, spotted eggs of the Japanese Quail which is called Kad of Kada here.

Coconut farming is a natural occupation of the people in Kerala and this lake area is not an exception. Processing of coconut was not noticed, neither did we see anyone selling green coconuts.May be it is done at places in the lake that we did not visit. 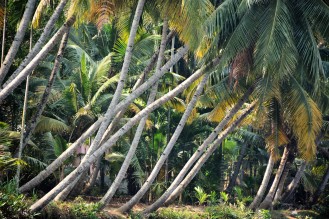 Fish farming, particularly the rearing of the Pearl Spot or the Karimeen is a lucrative business. We visit a farm where they raise the fish.

The fish are in the net. The net is puled out to show to the customers. If you dont like, the net goes back to the water with the fish remaining alive.

Roomi flatly refusesd to pay the asking price which he called exhorbitant for what was on offer. 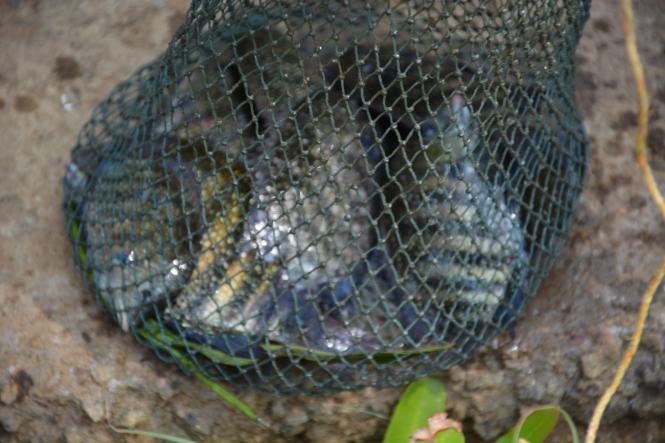 We could notice a Saw Mill on the lake shore indicating timber logging as aneconomic activity. 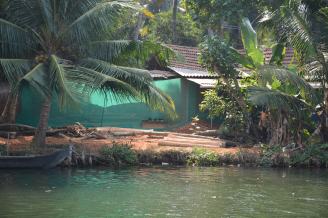 There are no school buses here or one has to go a longer distance to catch the bus. Taking a boat to the school is a better option for many of the students. 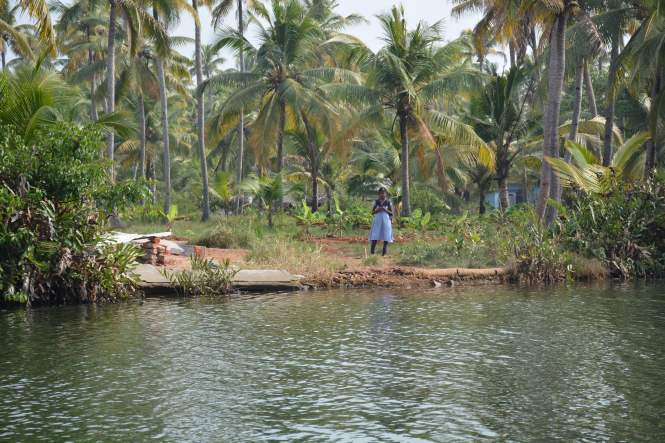 Ashtamudi means eight-coned. The lake is a maze and requires transport systems to match.

There are the crossings from one side to other on small country boats. 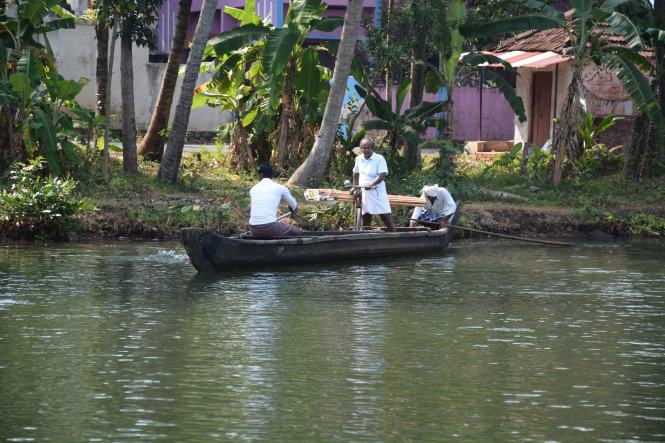 It looks like these houseboats are also used for transportation of people and goods.

Churches and temples are aplenty along the lake shores. Devotional music can be heard.

The sport of angling is prevalent on the lake. 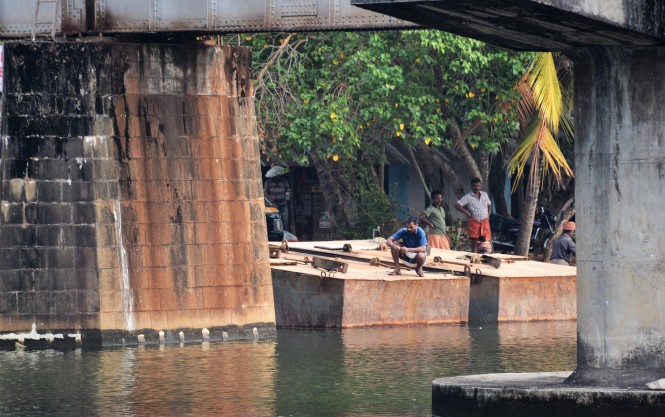 Angler with his fish line under a railway bridge on Ashtamudi lake.

What is more interesting is that it is also practiced by young women which is rare. It was heartening to see woman anglers.

Fish is sold along the lake fringes in small country boats. The sale transaction is done with the vendor in the water and the customer on land. 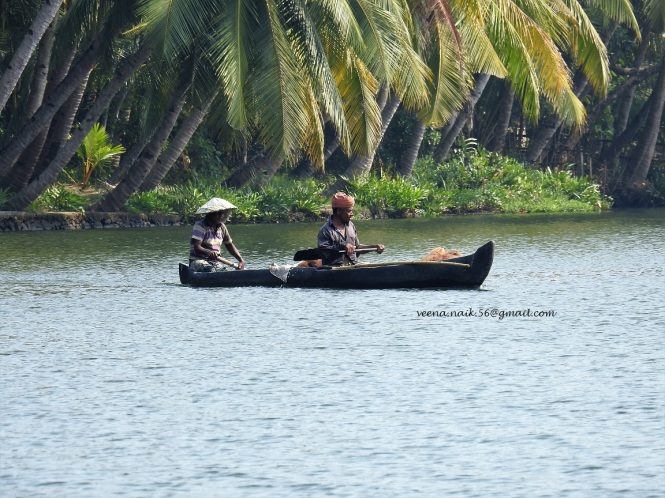 Fresh fish off the nets.Premium Quality.

There are a few islands in the lake apart from the larger Munro island and 43 species of Mangroves are supposed to be growing in the lake system which make growth of a large number of fish species.

As many as 57 species of birds have been recorded in the lake area, Among the most visible are the Cormorants who reside here in large numbers and constantly enrich the water with their dropping for the fish to grow on.

There were Kingfishers of course and the Terns and Bee-eaters. 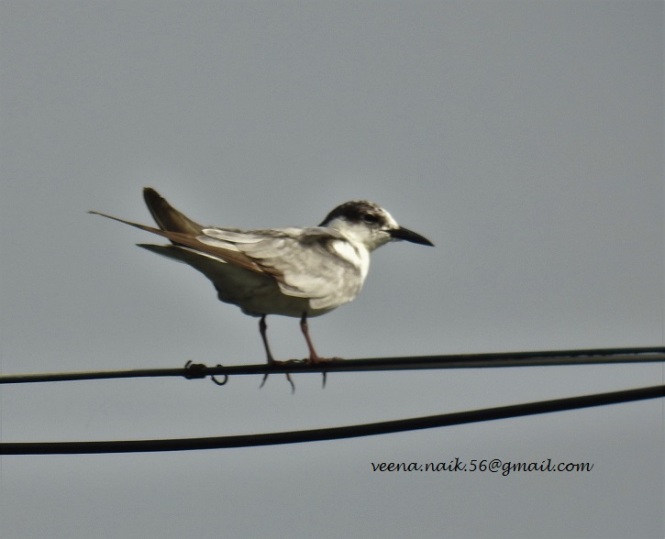 Roomi’s nest has a few residents. The White-Throated kingfisher has his holes in the sand banks. The Black-rumped Flameback Woodpecker also nests in the coconut palms.